Jane Brennan waited eight years to be diagnosed with median arcuate ligament syndrome; she urges others to 'keep pressing for answers'
May 30, 2020 1:30 PM By: Nathan Taylor 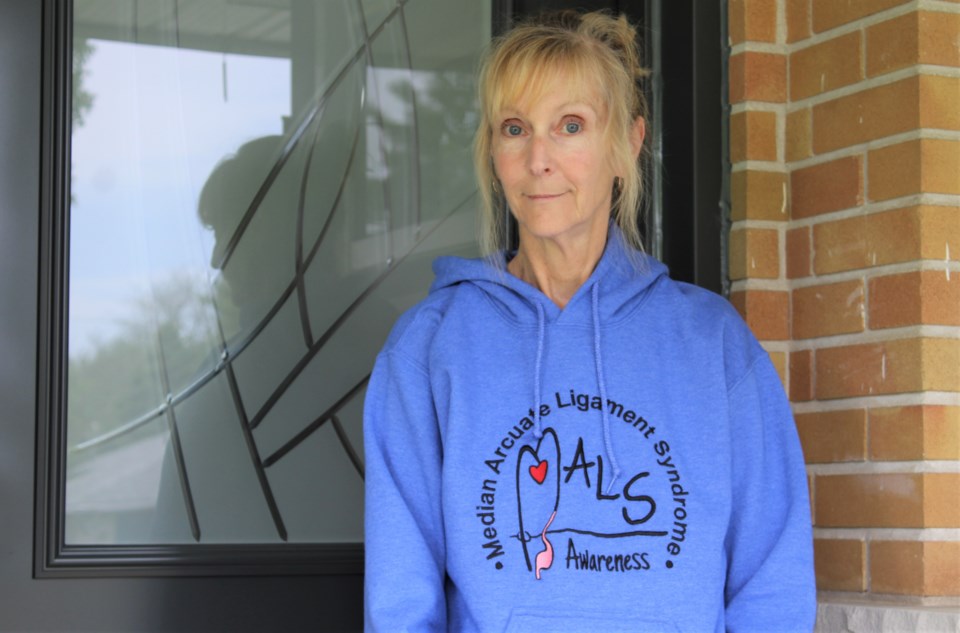 Jane Brennan is hoping to connect with others who have, or think they might have, median arcuate ligament syndrome, a rare disorder. Nathan Taylor/OrilliaMatters

An Orillia woman who had to wait years to be diagnosed with a rare disorder is hoping to spread awareness by sharing her experience.

Jane Brennan was diagnosed in December 2018 with median arcuate ligament syndrome (MALS), which occurs when there is compression of that ligament on the celiac artery. It took her eight years to get that answer, though. It takes an average of three years for a MALS diagnosis.

She underwent a series of tests in 2012. Doctors suggested she had anything from irritable bowel syndrome to a peptic ulcer.

“Over the years, my stomach was in more and more pain and was upset all the time,” Brennan said.

She cut dairy and gluten out of her diet, which helped, but in 2017, she began experiencing severe back pain.

“It felt like my ribs were broken,” she explained.

That pain persisted for a few months. It wasn’t until she had a pelvic ultrasound in October 2018 that she became closer to getting an answer.

The ultrasound led doctors to focus on the celiac artery. In November of that year, the results of a scan suggested she had MALS. It was confirmed by a vascular surgeon in Hamilton.

Brennan’s median arcuate ligament was wrapped around her celiac artery, caused by her being born with a low-sitting diaphragm. She underwent surgery in February of this year, but some of the symptoms have returned.

“It takes a long time to recuperate from this because your organs are pushed around so they can get at the nerves,” she said. “I can’t say at this point whether it was successful.”

The doctor has ordered a second scan, which will take place June 1.

Brennan is doing her best to cope with the pain, which she said has been likened to that of pancreatic cancer.

“Nothing you can take will help the pain of MALS,” she said. “The only thing that’s helped a little bit are nerve-pain pills.”

While she awaits more answers, Brennan is looking to connect with others who have the disorder or think they might have it. She feels the fact that it’s a rare condition is leading to a lack of diagnoses.

“Many people have been abused by the medical system and it needs to stop,” she said, noting some have suggested it’s all in her head, that she’s a drug addict or that she has anorexia, as MALS can lead to severe weight loss. “I’m sick of the stares. It hurts because I’m self-conscious.”

There is a non-profit group in the United States called the National MALS Foundation, but there isn’t something similar in Canada, so Brennan has relied on information from that website as well as a support group on Facebook.

She knows there are people closer to home who have MALS. A doctor told her he had two other patients in this area, but, for reasons of privacy, he couldn’t provide their information to Brennan. She’s hoping they will hear about her story and contact her at jebrennan@rogers.com.

“Even if three people get together, maybe we can have some awareness event — a walk or something — when COVID-19 is over,” she said.

In the meantime, she’s doing her small part to draw attention to the disorder. She has had some shirts made that bear the name of the condition, and she thanked TMS Promotional Wear president and CEO Dan Burke for giving her a good deal on them.

Brennan’s advice for anyone who is experiencing symptoms of MALS — especially severe abdominal, upper gastrointestinal pain — and is being told it’s just irritable bowel syndrome is to “keep pressing for answers” and order a CTA scan or Doppler ultrasound.

Good morning, Orillia!
Aug 7, 2020 6:00 AM
Comments
We welcome your feedback and encourage you to share your thoughts. We ask that you be respectful of others and their points of view, refrain from personal attacks and stay on topic. To learn about our commenting policies and how we moderate, please read our Community Guidelines.