Orillia's Ron Reid one of just 5 Canadians to receive accolade

'I think Ron Reid has been one of the most important leaders in conservation in Ontario over the last 25 years or so,' say official of local legend in conservation circles
0
Mar 29, 2020 1:30 PM By: Dave Dawson 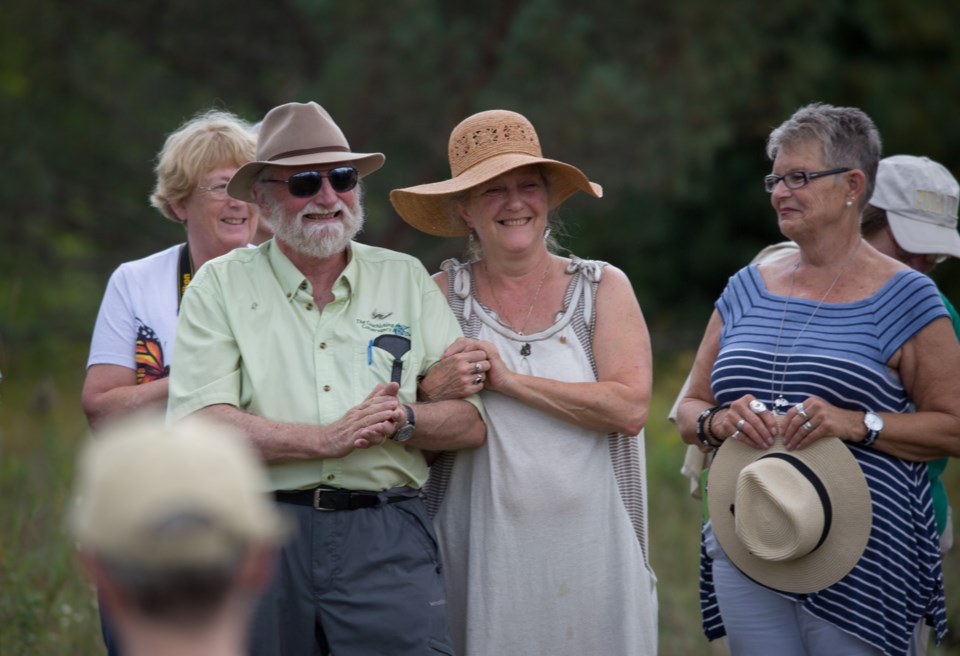 Ron Reid, second from the left, and Janet Grand celebrate among friends and family at the dedication of The Ron Reid Nature Reserve in 2018. OrilliaMatters File Photo

The founder of the Couchiching Conservancy and one of Ontario’s ‘most important leaders in conservation’ will be awarded an honorary degree from Trent University this summer.

Reid and four other Canadians “who have made a tremendous impact on the nation’s environmental, social, cultural and business landscape” will be recognized during convocation ceremonies at the Peterborough university.

Mark Bisset, who is the executive director of the Couchiching Conservancy, said Reid deserves the accolade.

“I think Ron Reid has been one of the most important leaders in conservation in Ontario over the last 25 years or so, but he’s more than just that,” Bisset said. “He’s a profoundly decent, wise, kind man.”

Bisset has worked alongside Reid for the past 11 years; he said he has learned a lot from him.

“He has a way of synthesizing information and articulating ideas and concepts that is rare. Part of that is listening,” said Bisset. “He listens carefully to people, even those he disagrees with. He works very hard, I think, to balance his views before he speaks.

“Combined with his grasp of ecology, those characteristics have made him influential well beyond his immediate circle,” he said.

Bisset said Reid has had an important partner all along the way.

“I don’t think any fair appraisal of Ron Reid can leave out Janet Grand, his life partner and chief sounding board,” said Bisset. “I think he would point to her as a critical ingredient to his success in conservation.

“And that is something else about Ron: it’s never about him,” said Bisset. “He will tell you that everything he has achieved has been in collaboration with others. Janet is his prime collaborator.”

They have achieved a lot.

According to a media release from Trent, Reid, a natural heritage consultant and field biologist, “has had a profound and protective impact on the nature that surrounds us, from waterfronts and wetlands to escarpments and beyond.”

His work with the province of Ontario and other organizations led to the protection of millions of acres of land including sensitive, natural habitats; the largest-ever expansion of the Ontario parks system; and wide-scale environmental planning.

Among other initiatives, he contributed to the Niagara Escarpment Plan which became a model for the Oak Ridges Moraine Conservation Plan and the Greenbelt Plan.

He founded the Couchiching Conservancy with Grand and other community members, and was the organization’s first executive director. Since 1993, the organization has protected over 13,000 acres of special, natural lands, especially within the Carden Alvar.

Reid, who will be awarded an honorary doctorate of science, has also provided guidance and advice to many other land trusts in Ontario and beyond.

In September 2018, the Conservancy officially named its largest nature reserve in his honour. The Ron Reid Nature Reserve provides habitat for several species listed by the Species at Risk Act.

Reid is also the author or key contributor to several books devoted to nature and conservation including, Canoeing Ontario's Rivers (with Janet Grand), as well as Creative Conservation and Beyond Islands of Green (both co-authored with Stewart Hilts).

His outstanding accomplishments have been widely recognized and celebrated through a number of awards from the Ontario conservation community.

Reid will be one of five recipients of an honorary degree.

Durham Region-based social justice and cultural champion Mobeen Khaja will receive an honorary doctorate of laws in recognition of his extraordinary community activism and leadership.

Celebrated Olympian and Indigenous community advocate Waneek Horn-Miller will be awarded with an honorary doctorate of laws for her remarkable achievements in sport, broadcasting and community activism and her life-long commitment to Indigenous rights.

Lisa LaFlamme, chief news anchor and senior editor for CTV National News, will be honoured with an honorary doctorate of laws in recognition of her work as a trailblazer for women in journalism and Canadian broadcasting.

“Their diverse accomplishments will no doubt inspire the graduates of 2020 and further brighten the celebration of excellence that is Convocation at Trent.”

Orillia Fall Fair cancelled
Jun 4, 2020 6:44 PM
Comments
We welcome your feedback and encourage you to share your thoughts. We ask that you be respectful of others and their points of view, refrain from personal attacks and stay on topic. To learn about our commenting policies and how we moderate, please read our Community Guidelines.