Plans on track to give abandoned railway corridor a facelift

Barrie-Collingwood Railway has been considered abandoned since 2011; County of Simcoe undertaking conversion of line into a multi-use trail
Aug 18, 2019 8:00 AM By: Jessica Owen 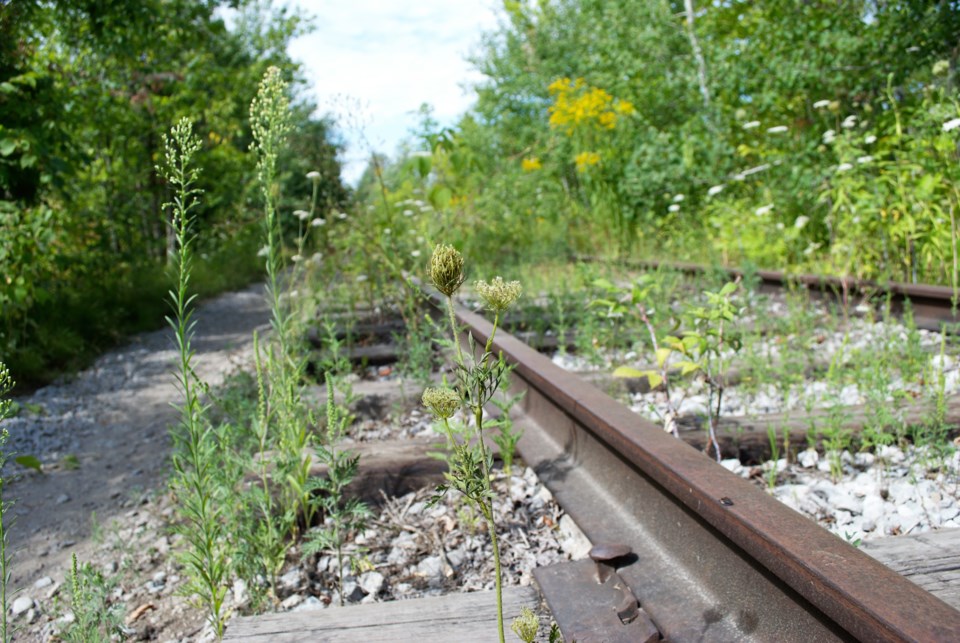 A portion of the Barrie-Collingwood Railway in Angus is mostly overgrown. Jessica Owen/CollingwoodToday

Active transportation users could soon have a new way to travel from Collingwood to Barrie.

On Tuesday, county councillors got a first look at the preliminary design for the conversion of the Barrie-Collingwood Railway into a multi-use trail, and agreed to look at funding for the project in future capital budgets.

“It’s all very preliminary. What we’re going to be doing next is an environmental assessment, and we’ll invite the public to come in to look at the drawings and provide their input,” said Debbie Korolnek, general manager of engineering, planning and environment.

“We need to decide what users will be permitted on the trail, and whether we’re going to allow snowmobiles or ATVs (all-terrain vehicles). We’re probably leaning toward more passive uses, but that will all be part of our discussion with the public,” she said.

The entire line from Collingwood to Barrie is 52 kilometres.

In the preliminary design document prepared by county staff and given to county councillors this week, staff have made multiple suggestions on how the trail can be converted, but are preliminarily recommending pulling out the rails to sell for scrap metal but burying and paving over the rail ties, minimizing the costs associated with building the trail.

"The reality is, the chances of us being able to maintain it as a true railway over time are pretty remote," said Korolnek. "There isn't the customer base... on this side. Some of the local municipalities have already removed the crossings. There just isn't a demand for that, but we really want to preserve the corridor."

Preliminary cost opinions are also included in the design report. The estimated construction costs for the trail clock in at $4.7 million. Also proposed as part of the conversion is construction of three staging areas for users to park their vehicles: one in Angus at a cost of $220,500, one in New Lowell at a cost of $201,540 and one in Stayner at a cost of $276,780.

The report also recommends identifying $2,500 per kilometre for annual maintenance costs which works out to approximately $57,500 for the 23-kilometre section of proposed trail from Stayner to Angus, or $95,000 for the 38 kilometres from the Town of Collingwood boundary to Utopia.

As the railway has not been used for trains in years and many parts are not maintained, parts of the line are currently overgrown and are in various stages of disrepair.

In 1997, the Collingwood station was demolished and, later that year, the City of Barrie and Town of Collingwood purchased the railway from CN with the vision to operate a short-line railway between the two centres.

In 2011, the Collingwood-Utopia section of the Barrie-Collingwood Railway was abandoned and the County of Simcoe acquired the Town of Collingwood’s portion in 2018.

The County of Simcoe and the City of Barrie have also done a joint feasability study on the railway, which will be presented at both councils in September. The study will outline the current costs associated with the entire line and will shed more light on what the City of Barrie plans to do with their portion.

Recent high-school grad rallies residents to preserve small hall
Aug 9, 2020 8:15 PM
Comments
We welcome your feedback and encourage you to share your thoughts. We ask that you be respectful of others and their points of view, refrain from personal attacks and stay on topic. To learn about our commenting policies and how we moderate, please read our Community Guidelines.