All three generations of this Orillia family have a desire to leave behind a healthier planet for future generations to enjoy
May 10, 2021 9:30 AM By: OrilliaMatters Staff 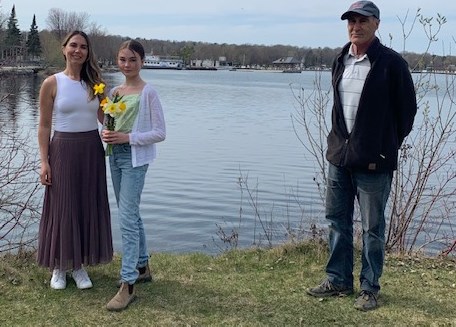 Zoe Roe, at age 14, already has a history of environmental activism.

Now a Grade 8 student, she notes, “In Grade 6 I wrote about pollution affecting our oceans and I was fortunate enough to be able to share that speech with hundreds of other concerned citizens. I have written three speeches on the need to change our daily habits to help our plant and to live a more sustainable life.”

She identifies herself as “an environmental speech writer and activist” and says, “I have loved using my voice to help try to make our earth a healthier place.” (To hear Zoe’s 2019 speech, click here.)

In 2019, when Zoe heard from her mother and grandfather about the Sustainable Orillia Youth Council, she joined the group. Not only that, she encouraged her younger sister, Mya, now 12 years old, to also join.

After all, as Zoe points out, “Just like me she’s interested in helping our planet.” The two sisters have “enjoyed attending Youth Council meetings and learning about healthy habits we can boost in our community.”

There’s an old saying: “The apple doesn’t fall far from the tree.” If Zoe and Mya are the apples, then mom Rosanna Shillolo is the tree.

Rosanna is a recent addition to the Board of Directors of Sustainable Orillia, but her life experiences and interests reveal her to be a person for whom the outdoors is a special place — a place she wants to enjoy whenever she can.

A graduate of the University of Guelph, Rosanna is the owner/operator of both the Sunrise Yoga Studio and the Stand Up Paddle Board Company. In addition, she’s a personal trainer and a nutrition coach.

Rosanna’s passion for sustainable outdoor activities and her health and wellness background made her a logical fit for the Sustainable Orillia Board of Directors. Like her daughters, Rosanna expresses “a desire to leave behind a healthier planet for future generations to enjoy,” especially as the mother of three.

She points out she was raised to respect and appreciate the great outdoors “where I spent a great deal of my childhood.” While growing up, family activities “usually involved hikes, picnics and outdoor adventures exploring different trails, parks and beaches.”

She also notes that it was imparted on her and her siblings to abide by the 3Rs—Reduce, ReUse and Recycle—and to be an ecologically responsible consumer.

“It was deeply ingrained in my shopping habits from a young age to avoid excess packaging and to consider the impact products will have on the environment,” she said.  “It’s gratifying to see that these habits have trickled down through my own parenting to positively shape the values and behaviours of my own children.”

Who did the imparting of these values to Rosanna? That would be Mike and Halina Shillolo, Rosanna’s parents.

Mike is a founding member of Sustainable Orillia, having been part of the small group that, late in 2018, discussed the need for greater emphasis on sustainability in our community and in our country. He has served as a Director since early 2019 and currently is the  Acting Treasurer of the organization.

Mike credits some of his earliest experiences for his being so concerned about the environment.

Born into a second-generation Italian family, his upbringing was enriched with vegetable and fruit gardens, wine-making and a stable family life, sometimes in 3-generational homes in downtown Toronto.

In addition, he spent two of his formative years living, working and attending school in France and England, where he experienced alternatives to the North American lifestyle of urban sprawl, car dependence, consumerism, and "more is better" as life's guiding principle. It was at that time, he says, that he realized that life could be more rewarding freed from the accepted—but clearly questionable—North American norms.

In England, his subsequent marriage to Halina joined him with a Polish/English family (post-WWII refugees accepted by the U.K.) whose values more resembled those he grew up with than those that have defined and determined the Canadian version of the “American dream."

During the last 20 years of a 40+ year teaching career, Mike recalls, he walked to work most every day, even if the school to which he was assigned as a daily substitute was up to four kilometres from his door.

He always prepared coffee at work and drank from the same ceramic mug(s), never sipping from a Tim Horton's throwaway—for the obvious environmental reasons.

As well, along with student volunteers, he tidied and swept the classroom at day’s end, imparting the twofold message, he hoped, that we are all responsible for our surroundings and that it is important in life to leave things as we find them—or better. “Custodians loved me,” says Mike. “Other teachers? Not so much.”

He notes, as well, that he felt misgivings from day one of his teachings.

“The school system seemed to prioritize acceptance of the status quo and fitting in rather than critical analysis and outside-the-box thinking—education serving as a pillar of society's vested interests," he explains.

"With climate change, for the first time since the 60's, it is the students who are impatient and have shown their willingness to draw a line in the sand: ‘No more business as usual or we leave the classroom in protest.’ I’m proud of them.”

Upon semi-retirement, he got involved with policy creation at the federal level, only to realize that despite excellent ideas and public consensus on many key issues, our first-past-the-post electoral system makes a mockery of the will of the people.

His frustration led him to a grassroots approach, culminating in the establishment of Sustainable Orillia. Mike adds, “The Youth Council's work alone has justified the cause we had in mind from the outset.”

This Shillolo family, all three generations, demonstrate how parental perspectives and example can rub off on the next generation. As Zoe says, “My grandfather and mother have both played a big role in the reasons I am so interested in making a difference in the world.”