PROFILE: Giving back to the community a priority for local officer

'I love the job, the best part is being able to have a positive effect on my community, where I grew up, it’s really important to me,' says Orillia OPP Const.
Feb 22, 2021 9:30 AM By: Tyler Evans 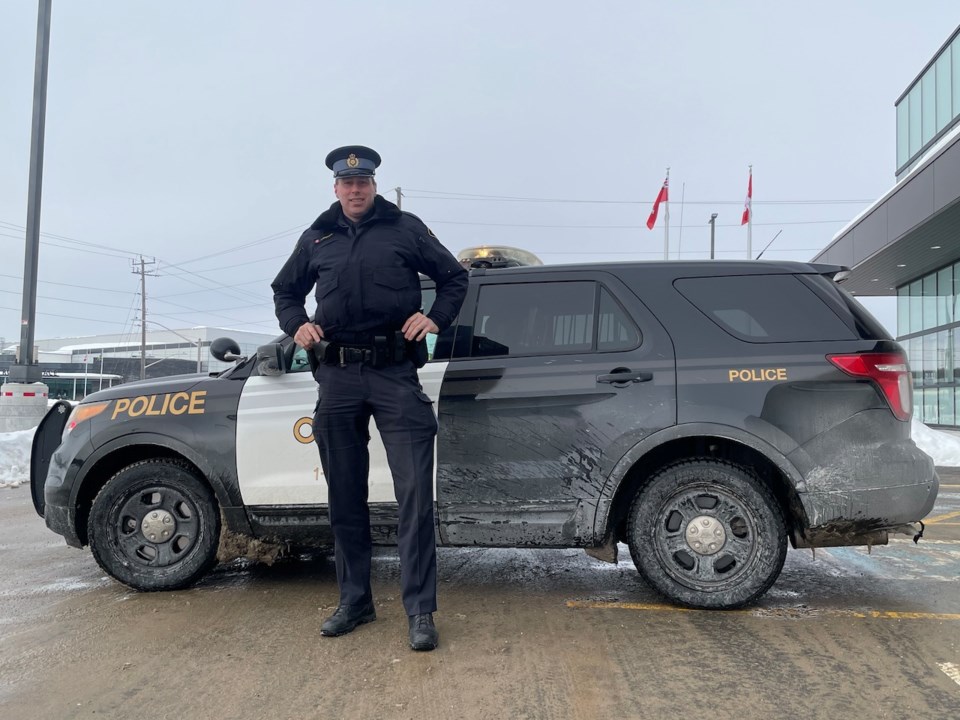 Police officer, university basketball star, family man and local coach Ted Dongelmans has always had a passion for making a difference and giving back to the Orillia community.

The now 46-year-old got his start playing basketball in Grade 8 when he attended Couchiching Heights Public School.

“In Grade 7, I was on every school team except for basketball. At the start of Grade 8, coach Wolfgang Jejna came to me and said, 'You’re going to play basketball this year,'” Dongelmans recalls.

The near six-foot-ten gentle giant hit a massive growth spurt when he got to Grade 9, which didn’t help him improve his basketball skills at Orillia District Collegiate and Vocational Institute (ODCVI).

“I was not very good. I was a project through a good part of high school, but I started getting a bit of interest from universities in Grade 11 and 12 because I was six-foot-seven or seven-foot-eight at that point,” Dongelmans said.

During lunch hours and after school hours, Dongelmans would spend time practising lay-ups and basic fundamental skills with coach Ian McMillan, which helped him begin to improve.

“Once I got to Grade 13, I started getting a fair bit of attention because I was six-foot-nine and was starting to show a little bit of promise,” he said.

Dongelmans finished his high school career as one of the most improved players in the program; he was also one of the smartest after learning from coach Andy Power.

“Coming out of high school, I was one of the better-educated players of my era. I had a better understanding of basketball than a lot of my teammates did because Andy was a very well-rounded coach and really got me to the next level,” he explained.

After playing one season with Dalhousie University in Halifax, Dongelmans decided he wanted to play for coach Peter Campbell who tried previously to recruit him to the Laurentian University basketball team in Sudbury.

In Dongelmans' four years with Laurentian, the team won their first-ever OUA Championship in 1997-98. Two years later, in 1999-2000, they did it again. Dongelmans was awarded the OUA East MVP during his tenure and was named to the all-Canadian team on three occasions.

Dongelmans credits his on-court success to his late start in the game and his lack of talent early on.

“For me, a big part of it was my physical development. When I started playing the game late, I was always trying to play catch up and physically I was really thin, not very strong, and not very coordinated,” he said.

“Because I wasn’t as good as everyone else, and because I started late, it gave me the drive to get better. I learned to work hard to get to where I wanted to be.”

After playing at the university level, Dongelmans decided to go pro. He played professional basketball in Switzerland for two years from 2000 to 2002, but had little success.

“Coming into my second season, I was coming off ankle surgery and I didn’t have a very good season at all,” he explained.

“I had the choice to go back and travel around and try out for teams or hang it up. At that point, my motivation wasn’t there to keep going.”

Dongelmans, at age 27, moved back to Orillia, got married, and was looking to write the next chapter of his life.

“I was still kind of figuring out what to do, and at the end of that summer I got hired on with the Central North Correctional Centre in Penetang, and it was just a job at the time,” he explained.

“I ended up making the tactical team there in the jail, which I had a lot of fun doing.”

After four years of working as a correctional officer, a mentor suggested Dongelmans should become a police officer.

“Before that, I never gave it much thought. I don’t have any police in my family, I didn’t know any police, but it piqued my interest and I thought it was a good fit for me,” he said.

Dongelmans was hired on with the OPP 14 years ago and looked after Highway 407 as a rookie officer. Now, he’s a constable working in his hometown of Orillia.

“I love the job, the best part is being able to have a positive effect on my community, where I grew up. It’s really important to me,” he said.

Part of Dongelmans's job is working in Orillia high schools as a school resource officer, which he’s done now for the past four years.

“It’s been very rewarding. I love helping people and helping kids figure out what they need to do to get to the next level and learn the skills that they need to be more effective,” he said.

Dongelmans says working with local youth gives him an opportunity to give back to the community that gave him his basketball and policing careers.

“I feel I need to give back to the community because I’ve had a lot of people and influences in my life that got me to where I ended up being, and without any of them, things may have been different for me,” he said.

While Dongelmans says the job of being a police officer is rewarding, it can also be difficult.

“Policing is from zero to 100 and back to zero. Emotionally, sometimes, it’s hard to deal with, but that’s just the nature of it,” he said.

Dongelmans says he is thankful there are a lot of resources available for emergency services in regards to post-traumatic stress disorder and mental health concerns.

“The resources available are tenfold to what they were when I first got on the job,” Dongelmans said.

“Because we are more aware of the problems as a policing culture, the organization is taking steps to help us be healthier mentally, address issues quickly, talk about them, and get help when we need it.”

Away from being a police officer, Dongelmans still spends a lot of his time on the hardwood, coaching youth basketball. He has coached basketball for more than 15 years and is the current president of the Orillia Youth Basketball Club, which oversees the Lakers program.

“I love the energy, and I love that with my experience from playing at a high level, I have a ton to offer these kids,” he said.

Dongelmans hopes his knowledge can help students of the game get to the competitive levels he once experienced.

“If I can make the difference for even one or two of these kids, to educate them and train them well enough to get to the next level, then I will have achieved my ultimate goal,” he said.

But the main goal for Dongelmans isn’t creating superstars, but rather good contributors to society.

His whole family revolves around the basketball world and staying active; his wife Stephanie was also recognized as a three-time all-Canadian and two-time OUA East Player of the Year in university. He is also the father of son, Joe, and daughter, Emma, who both love basketball, among other pursuits.