Province shows 'no regard for health' of Lake Simcoe, group says

'Lake Simcoe is in an emergency situation,' official warns, noting plans for 55 km of new highways around the watershed will make things even worse
BarrieToday Staff Jul 13, 2021 5:30 PM

NEWS RELEASE
SIMCOE COUNTY GREENBELT COALITION
*************************
Earlier this month, the province released its Master Transportation Plan for the Greater Golden Horseshoe.  Its purpose is to outline the future “vision” of what transportation planning will look like for the foreseeable future.

According to mapping within the discussion document, our regional future includes more highways and pavement around Lake Simcoe.

Despite strong opposition to the Bradford Bypass that will bisect the lake’s largest and most important wetland - the Holland Marsh - and drastically increase GHG emissions in the area, the government is doubling down on highways in this sensitive watershed.

An additional highway that will connect the 404 to Highways 12/48 will wrap about the south eastern edge of the lake was included in the planned projects. 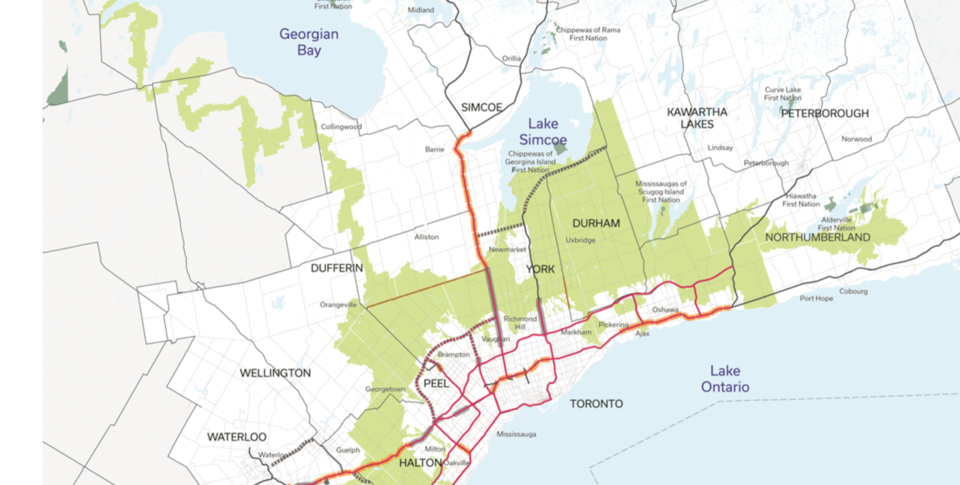 Clearly, the Bradford Bypass is just a small piece in a larger picture of highway widenings and new highways in the Lake Simcoe watershed which is already struggling to stay healthy.

“These highway plans do the opposite of what is needed to improve the lake’s health by guaranteeing an increase in salt loads to the lake, and by removing wetlands and forests. Lake Simcoe is in an emergency situation," warned Malcolmson.

"We must reduce phosphorus and salt sources dramatically, increase natural cover and keep every inch of greenspace and wetland we have. The Lake Simcoe Protection Plan, which is the law, says all this," she said.

"So once again the province is ignoring the law, and the science. All I can conclude is that the province puts development above all other considerations and has no regard for the health of the lake and the communities surrounding it.”

The discussion document also outlines the public’s feedback about their priorities for transportation including the top three: making transit as convenient as driving, making getting around healthier for people and the planet and to make better use of roads and railways we already have.

But plans for the Lake Simcoe area do the opposite by proposing 55 kilometres of new highways to facilitate building bedroom communities in rural areas with few jobs.

“I guess those public priorities will only be given credence if you live in vote-rich GTA,” says Margaret Prophet, Executive Director of Simcoe County Greenbelt Coalition. “Between the Bypass and this new highway, we're essentially building another Highway 413 right around the shores of Lake Simcoe.

"Who benefits from that? asked Prophet. "Not Lake Simcoe or the economies or communities that depend on its health. With all of our communities needing help and businesses struggling, spending over $1 billion to build more highways around Lake Simcoe is the best they can do?"

“They’re increasing salt sources with two new highways, bisecting and polluting the Lake Simcoe’s headwaters and largest wetland with the Bradford Bypass and then telling us that this is inevitable due to growth that they’re encouraging in the area," said Lloyd.

"These things are choices that are being made for us, not inevitabilities! Climate change is inevitable.  How and where we grow are policy choices. The public wants different transportation investments, but instead we get more of the same.”

Blythe Wieclawek, SCGC Environmental Youth Advocate, says “refusing to progress past highways and sprawl is only further jeopardizing the future of this area's children - telling us anything otherwise is unconscionable.

"Knowingly putting more salt into the lake while politicians parade their love for [the lake] is simply hypocritical," said Wieclawek.

"Heading up a master transportation plan where the first priority is to improve transit connectivity, but then offering infrastructure that ensures we stay in our cars is disconnected and dangerous policy making especially as we are in a climate emergency. This plan does nothing for the youth of the area and only makes our future more dangerous.”

The province is seeking feedback on the master transportation plan until Aug. 28, 2021. There is a survey that you can fill out here: https://www.ontario.ca/form/consultation-greater-golden-horseshoe-transportation-plan-discussion-paper

You can also send them an email via: GGHTransportationPlan@Ontario.ca.

Footcare Solutions: Orthotics for every walk of life

Order Catering Online - Enjoy a relaxing holiday season and leave the food preparation to us.