In a world sad with the demise of so many wildlife species, red-bellied woodpeckers are finding a way to flourish, reports outdoors columnist
Dec 8, 2019 11:00 AM By: David Hawke 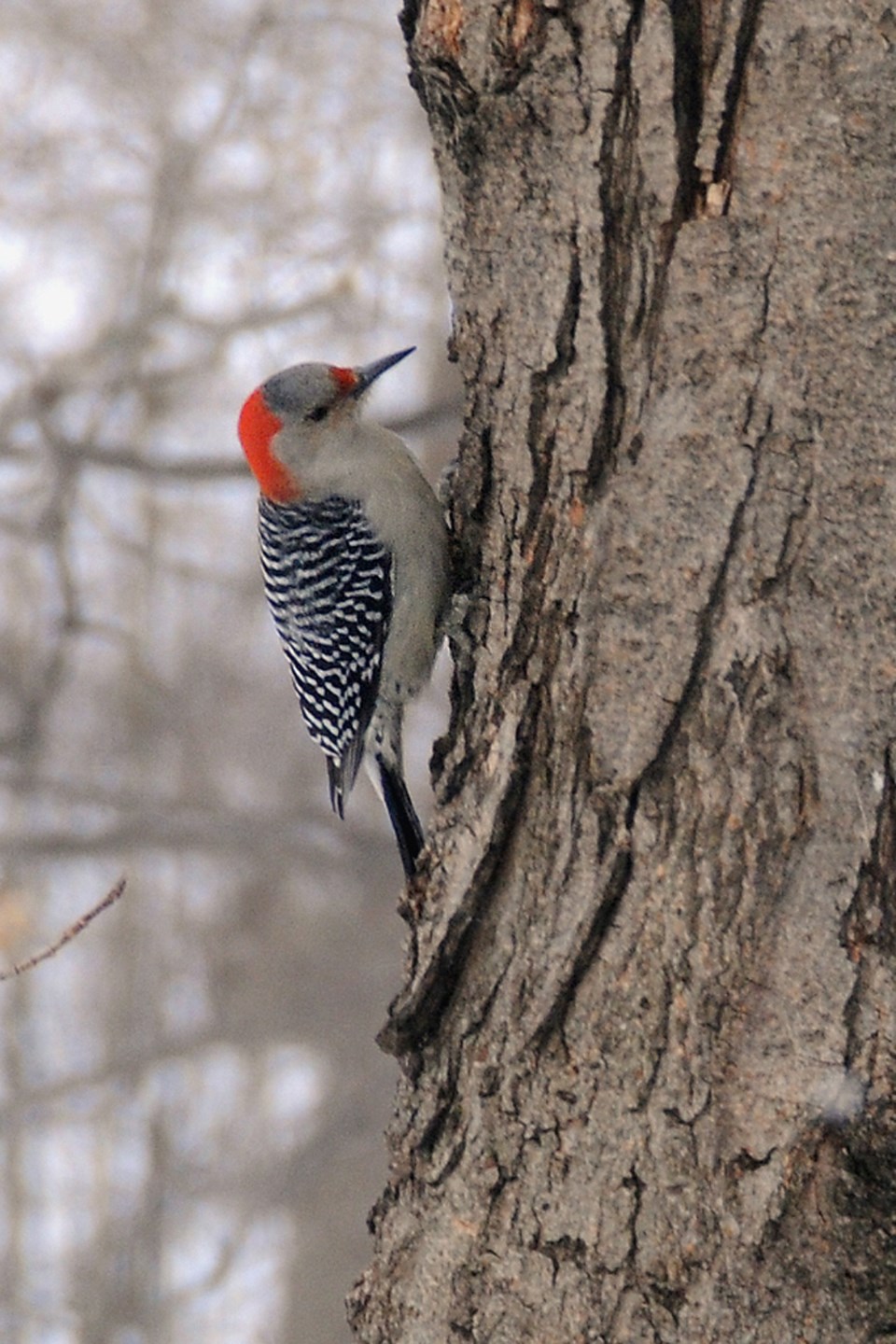 A red-bellied woodpecker showed up a year ago - and recently returned. The species is a rare one in that its population is actually strengthening. David Hawke/OrilliaMatters

I must admit I was rushing when I went out the door... places to go, people to see... so my sudden appearance was indeed a surprise to the gathered flock of birds.

Blue jays bolted this-away, chickadees flitted that-away and two black squirrels almost head a head-on collision as escape branches were grasped for! But then a new shape was noted, a new pattern of feathers, enough of a difference that I halted half-way across the deck for a better look-see.

Grey body about the size of a blue jay, black and white ladder pattern across its back, red nape, and stuck to the side of a tree like a hairy woodpecker... by George it's a red-bellied woodpecker! We had one at our feeders a year or so ago (see picture), so this sighting was significant for our backyard bird list.

Adding itself to a list already comprised of hairy, downy, pileated, sometimes red-headed, and occasionally a yellow-bellied sapsucker and northern flicker, this new woodpecker shares a few traits with those who have come before.

Notable is the positioning of its toes... with two facing forward and two extending back it is labeled as being a zygodactyl (Scrabble players take note). Thus equipped it can hitch along a branch or up a trunk with the aid of very stiff tail feathers for backwards bracing.

In a world sad with the demise of so many wildlife species, here is an example of a population that is actually strengthening!

Since round about 1950 this woodpecker species has been expanding its range northwards and westwards from a home base of eastern North America centered in the Carolinas.

This interesting phenomenon has been flagged by the summer-based North America Breeding Bird Survey and the wintertime Christmas Bird Count, both programs being international in scope and observations being supplied by thousands of volunteer birdwatchers.

So why, and how, is this happening? Red-bellied woodpeckers have become a very closely watched species in recent years as there are those who are trying to hitch the range expansion to climate change, assumedly that warmer and shorter winters are allowing these birds to overwinter in what was once inhospitable conditions.

But is that really what is happening? Maybe, maybe not.

Some researchers are suggesting that habitat changes coupled with an excellent adaptability of this species for change has made for this strengthened presence.

While usually, normally, they are a bird of mature hardwoods (especially oak) there seems to be an adaptation to living within forest fragmentation, utilizing bird feeders, feeding on the fruits of ornamental urban shrubs, and finding ample nesting trees as the beech, chestnut and elms die off.

There is also a thing known to bird researchers as Bergmann's Rule. This is a way of looking at geographical variation of a species.

The Rule states that the further north a species occurs the more likely it is to be larger in size than its southern counterparts. The larger body can withstand cold temperatures better than small birds that could freeze straight through.

In 2014 Kirchman and Schneider published a report in The Wilson Journal of Ornithology of their investigations into the possibility that red-bellied woodpeckers are growing bigger in the north and thus are surviving better.

Seems society now frowns upon the "collecting" of birds in that old traditional way.

So, while a fascinating theory of big birds moving north, it didn't really prove anything. Which brings us back to the question: what's going on out there?

Another thought is that males (which are slightly larger to begin with) are adapting to these changing winter conditions, and are luring females northwards in the spring during the mating season.

As the young are forced out of their natal areas in the autumn, it is suggested that females retreat south (smart option) while males stay and establish a year-round territory along the north border of the known range.

The first time I heard of this species being around the neighbourhood was in 1986 at Tiny Marsh when a birder (Dan Stuckey) reported seeing one (I had to look it up in a field guide to see what he was talking about).

Nowadays over five million sightings of red-bellied woodpeckers have been submitted to eBird (an web-based bird info sharing program).

If you have a bird feeding station set up, keep a watch for one of these birds to show up. We are at its current northern range and while somewhat uncommon today it may become common as chickadees within a decade or two.