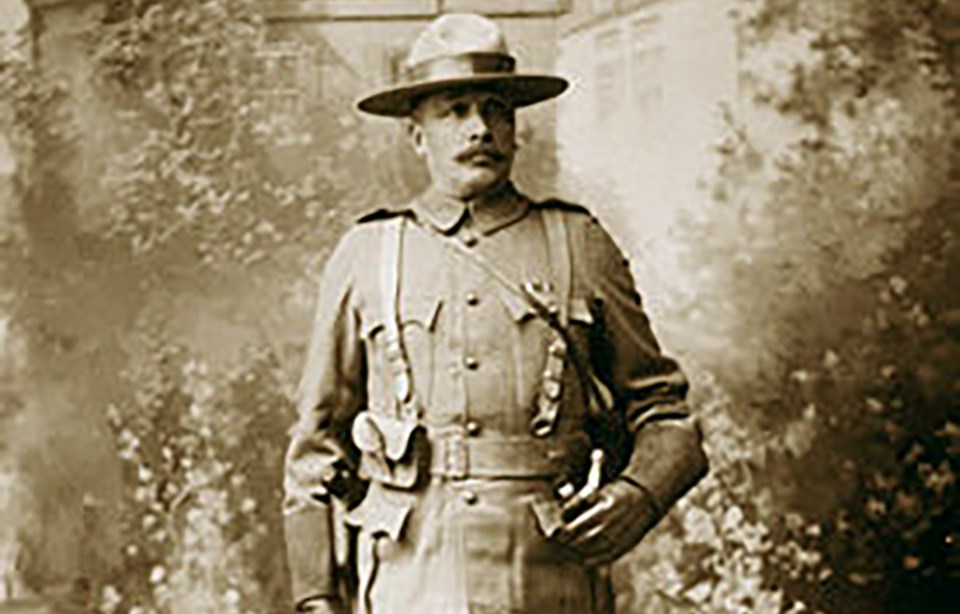 Sir Sam Steele, one of the heroes of the Boer War. SUBMITTED

Doug Wrigglesworth was all set to talk to the BWG Local History Association on Saturday about Canadian involvement in the Boer War.

The self-described “history nerd” was especially excited to talk about one of the heroes of the Boer War, Canadian Sam Steele, born in the former Medonte Township near Orillia.

Social gatherings were cancelled, public buildings like the BWG Public Library, where the association meets, were closed and social distancing became a necessity.

The public talk may have been cancelled, but Wrigglesworth was happy to chat about his interest in the Boer War, and in Steele.

The Boer War of 1899 to 1902 was fought between the South African Dutch settlers (Boers), and the British. It was a brutal war of the late 19th century, driven by Colonialism and the thirst for resources.

Wrigglesworth’s interest was sparked not so much by British military history, although that is one of his fields of interest, but by his interest in Sherlock Holmes.

Wrigglesworth is a ‘Sherlockian’ – a fan of author Arthur Conan Doyle and his creations, Sherlock Holmes and Dr. John Watson.

Sherlockians “play the literary game, in which Sherlock and Watson were real,” he explained. It involves following connections to real people and real events contemporary with the action in the stories published largely between 1887 and 1927.

When Wrigglesworth was reached by a reporter for this story, he was addressing copies of Canadian Holmes, the journal of the Bootmakers of Toronto, a chapter of the Sherlock Holmes Society of Canada.

He explained the Boer connection:

In 1900, Conan Doyle “picked up his stethoscope, that he had laid down ten years before, and volunteered for a hospital in South Africa in the midst of a Typhus epidemic” in support of the British forces.

Conan Doyle also wrote several books in the years that followed, justifying the British actions against the Boers – and it was those political books, not his creation of Sherlock Holmes, that earned Conan Doyle a knighthood from King Edward VII.

“It all connects,” Wrigglesworth said. The topic was also, he said, “an excuse for me to make up a talk on my particular Canadian hero – Sam Steele.”

Wrigglesworth remembered going to the movies as a kid, “and having Gene Autrey and those guys and not having any Canadian heroes.”

Then he discovered Steele, the “man of iron,” in the history books.

Born just outside Orillia in 1848 or 1849, Steele “didn’t do well on the farm,” Wrigglesworth said, but he was passionate about following a military career. He joined the Militia while still a teen, to fight the Fenian raids, and later joined the Red River Expedition, in 1870.

Fascinated by the west and the tales of James Fennimore Cooper, in 1873 he became the third officer sworn in by the North West Mounted Police – rising swiftly through the ranks.

Steele was involved in maintaining order as the Canadian Pacific Railway was constructed and suppressing Riel’s North-West Rebellion, in 1885.

He arrived too late for the Battle of Batoche, but “he went and did his thing, won a couple of battles with his small troop,” said Wrigglesworth, and was promoted to Superintendent.

When the Gold Rush hit the Yukon in 1896, it was Sam Steele who commanded a contingent of the North West Mounted Police to block the passes between the Alaska panhandle and the Yukon, requiring all miners to have at least a year’s supply of food before they could enter.

Steele also brought order to a corrupt and lawless Dawson City, although his tough stands didn’t always make him popular.

Steele’s connection to the Boer War? He had met Lord Strathcona, then Donald Smith, while the CPR line was being built, and impressed Smith with his ability to keep order.

In 1900, he was offered the command of Lord Strathcona’s Horse, a mounted regiment that Steele was asked to recruit “from his cowboys and mounted police,” Wrigglesworth said.

Strathcona’s Horse proved to be one of the most effective battalions in the fight against the Boer forces. While in South Africa, Lt.-Col. Steele met and impressed Major General Baden-Powell and in 1901, was offered command of a division of South African Constabulary.

Baden-Powell, later the founder of Boy Scouts, had one more connection to Steele: he borrowed the Stetsons worn by the Strathcona Horse and based on those worn by the Mounties, for his scouting movement.

Steele returned to Canada in 1907 but remained active. He was 66 when World War I broke out, and was promoted to Major General. He travelled to Britain, only to find the British felt he was too old for active command, and his appointment as C.O. of the British Army South-Eastern Division was the source of continuing conflict, until he was sent back to Canada.

“He was an interesting guy,” said Wrigglesworth: a flawed hero, with the prejudices of his time. “He wasn’t exactly the white Stetson guy that Gene Autrey and Roy Rogers were. He was tough, and took no nonsense” – and was memorable, blemishes and all.

City set to celebrate 'a Canadian hero' later this month
Jun 7, 2019 3:00 PM
Comments
We welcome your feedback and encourage you to share your thoughts. We ask that you be respectful of others and their points of view, refrain from personal attacks and stay on topic. To learn about our commenting policies and how we moderate, please read our Community Guidelines.