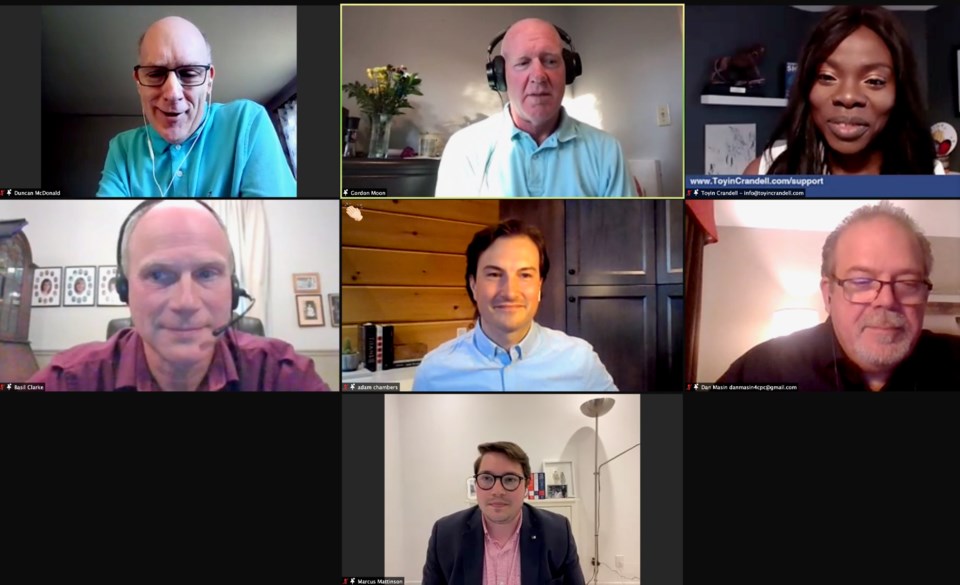 The five people who are hoping to be named the federal candidate for the Simcoe North Conservatives got together virtually for the first time Wednesday evening to share their views and priorities.

Since no candidates have been vetted yet by the national party, a local Conservative decided to take a grassroots social media approach to host a Zoom meeting for the hopefuls — Adam Chambers, Basil Clarke, Toyin Crandell, Dan Masin and Marcus Mattinson — and for members of the public who wanted to watch.

At one point, there were 81 people signed in, including the host, moderator and potential candidates.

The participants were given the opportunity to introduce themselves.

Chambers, a lawyer who grew up in Midland, cited his experience working in government, including his time as principal secretary to the late Jim Flaherty when he was finance minister.

Chambers also serves on the board of directors for the Waypoint Centre for Mental Health Care and has co-founded non-profits that help at-risk youth find jobs in the trades.

He said fiscal responsibility is among his main focuses.

“The current government doesn’t have a plan,” he said. “They’re treating the economy like a science experiment.”

Clarke, who is mayor of Ramara Township, used his time to reflect on his past and how it relates to the present.

When he was 20, he recalled, he talked to his father about his plans for the family farm once he “inherited” it. His dad laughed and asked Clarke what made him think he was going to inherit it.

“People that are given gifts don’t appreciate it. They must earn it,” his dad told him.

“When it comes to the farm, I am merely the steward,” Clarke said, adding he doesn’t stretch the operation beyond its means and that he would treat his role as MP in a similar way.

Like Chambers, Crandell sees fiscal responsibility as a top priority. She runs a financial coaching company out of Victoria Harbour and said business owners want to feel like they’re a priority coming out of pandemic.

She referenced her years of support for the Conservative Party of Canada through donating and volunteering, as well as running for the party in Etobicoke North when Stephen Harper was prime minister.

“People are ready for someone with the life experience to show that they mean what they say, they say what they mean … and I am that woman,” she said.

Masin is a mortgage broker who was born and raised in Toronto and now lives in the city and Penetanguishene.

“They say home is where the heart is, and my heart is in Simcoe North,” he said.

His job has allowed him to assist people who have been turned down, and he feels his skills can be transferred to the role of MP.

Mattinson is a bilingual communications professional with a decade of experience with the Conservative party. That includes his time as a constituency assistant for Simcoe North MP Bruce Stanton, who is not seeking re-election.

No matter who gets the nomination, it should be everyone’s duty to ensure Conservative Leader Erin O’Toole becomes prime minister, Mattinson said.

“It’s important to stand up for Canadians, especially in this time.”

Each participant was given questions a couple of days in advance of Wednesday’s meeting. They were asked to pick one issue, explain why they support it and why it is critical to the party.

Chambers said there is a “unifying issue across the country … and it’s about the economy and creating economic opportunities.”

Conservatives would be in a position to work toward economic recovery, Chambers said, and would focus not only on urban areas, but all parts of the country.

Clarke had international affairs on his mind.

“We are now discovering that our good friends, China — they’re 90 per cent sure that COVID escaped from a laboratory in Wuhan,” he said.

“The Canadian people are sick and tired of Justin Trudeau defending communist China.”

Clarke also said Huawei shouldn’t be allowed to operate in Canada and claimed “Trudeau loves the fact that China controls the internet” — a reference to Bill C-10, which has been criticized for having components some believe would infringe on Canadians’ freedom of speech and expression.

Crandell again brought up the economy, saying it is “in a huge mess.”

Last month, she noted, the Parliamentary Budget Officer warned the debt-to-GDP ratio would not drop to pre-pandemic levels until 2055.

“The truth is that somebody is going to have to pay that money back,” she said.

“This is mission critical. This is why we, as Conservatives, have to win the election.”

Masin said the Liberals are ethically lacking and that he would focus on reaching out to different parties and levels of government to get things done.

“Most Canadians are fed up with the American style of politics,” he said.

Mattinson said reliable, high-speed internet is an important issue, as is Bill C-10.

“The attack on freedom of speech is one of the most important issues of our time,” he said.

“We have to protect people’s rights.”

The participants were then given a “surprise” question — more of a task, really. They were told to say something nice about, or make a case for, one of the others seeking the nomination.

Chambers said he respected Clarke for putting his name forward for public office, being elected and his role as a farmer.

Clarke praised Crandell for being “a die-hard Conservative.”

“I think she’s got a very solid ethical background and I think that’s the kind of candidate we’re looking for,” he said.

Masin, Crandell said, has a “commitment to integrity” and works hard for his clients.

“He would put that same level of care and morning-’til-night dedication into representing our community,” she said.

Masin used his limited time to return the praise to Crandell. When he was reminded he was supposed to be talking about Mattinson, he said, “You’re a great guy, buddy.”

Mattinson was the last one to speak, and he noted he and Chambers worked on Parliament Hill around the same time.

Regardless of who wins, he said, “We’re going to gain another great member of Parliament.”

Because none of the five have been vetted yet by the federal party, a date for a nomination meeting has not been set.

The meeting was recorded and can be viewed by contacting the applicants.