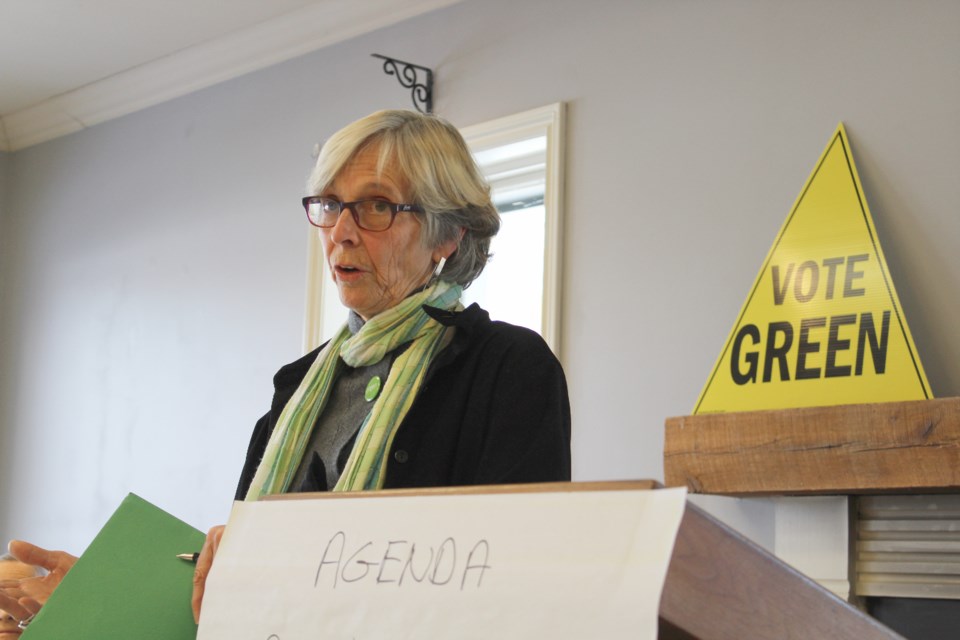 A familiar name in Simcoe North politics will again represent the Green party, but this time she'll be on the provincial ballot.

During a nomination meeting Sunday at Swanmore Hall in Orillia, Valerie Powell was selected as the Simcoe North Greens' candidate for the June 7 provincial election.

"Since the first time you put your trust in me as your candidate for Simcoe North in the federal election in 2008, much has changed," Powell told her audience. "It felt radical and it felt like it was time for change."

It still feels like it's time for change, she said, but added the Greens have been taking a more realistic approach in recent years. A decade ago, many Greens "felt like they owned the issues" of the day, such as proportional representation and climate change.

"We foolishly thought we were the only ones who could solve those issues," Powell said.

The Greens have made inroads since then, she noted, pointing to federal Green Leader Elizabeth May winning a seat in Parliament in 2011 as an example.

Also, three Green members of the legislative assembly were elected in British Columbia in 2017.

"Ontario is next," Powell said, voicing her support for Ontario Green Party Leader Mike Schreiner. "Greens are not going away. We are here to stay."

The provincial party will hold its convention at the beginning of February, when the platform is expected to be rolled out.

Powell said her "key interest" is proportional representation, an alternative to the first-past-the-post system of electing politicians.

"If B.C. gets proportional representation, it will help the other provinces," she said of the upcoming referendum on the issue in that province. "I think it's coming. It has to, eventually."

While Powell is focusing now on winning in Simcoe North, she is also looking beyond June 7. She is hoping to connect with younger residents of the riding who might be interested in carrying the Green banner in future elections.

While Simcoe North, a Tory stronghold both provincially and federally, is not targeted as a riding the Greens will win, "we will win eventually," Powell said.

Eighteen eligible voters, of the local riding association's 40-plus members, cast ballots at Sunday's nomination meeting, choosing Powell over the second option: "none of the above."