Feedback will lead to recommendations that will be presented to police, military personnel in Simcoe County
Nov 28, 2018 1:48 PM By: Nathan Taylor 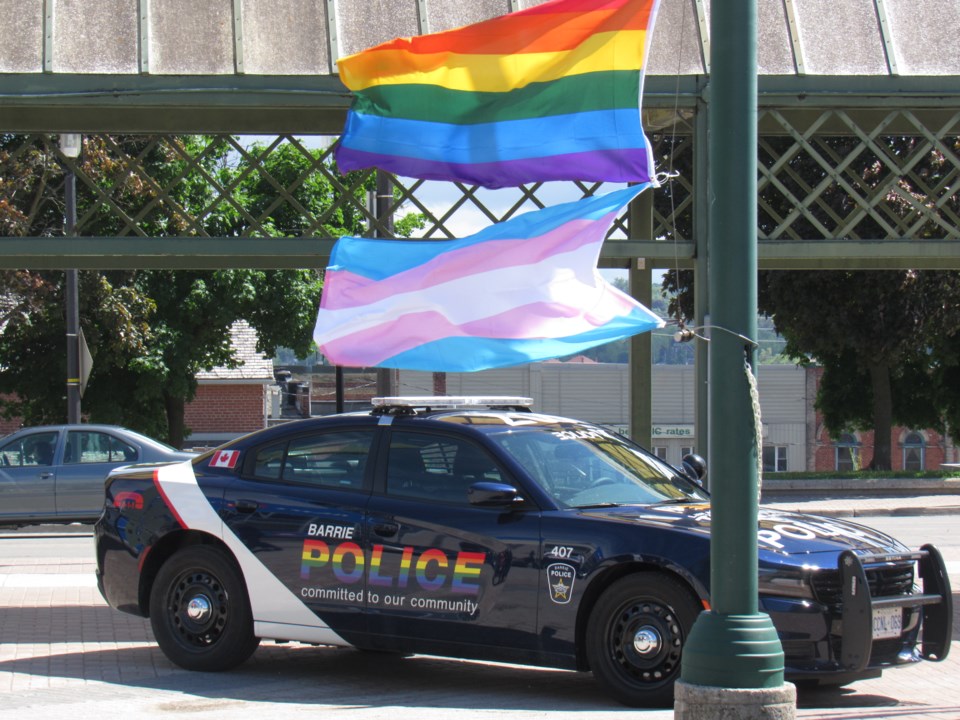 The rainbow flag, the transgender pride flag and the rainbow Barrie Police cruiser are shown. Fierté Simcoe Pride wants to know what people think of police and military taking part in local Pride events. It has launched a survey to gather feedback. Shawn Gibson/Village Media

The question of whether police should be able to take part in Pride events has been raised in recent years in big cities across Canada. Now, that discussion is happening on a local level.

Fierté Simcoe Pride wants to know how people feel about the involvement of police and military personnel in events in Simcoe County, so the organization has launched a survey.

“This will inform a lot of our understanding and help us make good decisions,” said Fierté Simcoe Pride president Brandon Rhéal Amyot. “We’ve been thinking about this for some time because this is a discussion that’s happening across the country and across the world, even.”

The issue was thrust into the national spotlight in 2016, when Black Lives Matter stalled the Toronto Pride Parade and issued a list of demands to organizers, one of which was to stop allowing floats from police.

“Black Lives Matter in Toronto and in other cities really brought that conversation to a head,” Amyot said. “We’re starting to think of our movement as not this one homogenous thing. It’s political, it’s celebratory, it’s about change. It’s not just one thing.”

Police in Simcoe County have participated in some Pride events in the past. They took part in last year’s Barrie Pride Parade, and South Simcoe Police have attended flag raisings and other events. While the issue hasn’t been a prominent one in this area, Fierté Simcoe Pride is being “proactive” about it by gathering public opinion.

“It is different (in Simcoe County) in some respects,” Amyot said. “That’s another good reason for doing this survey. We need to make local decisions. There’s always more work to do.”

A couple of questions in the survey are about what actions police and the military could take to improve relations with the gender and sexually diverse (GSD) community and how they could better address the concerns of that community.

The feedback gathered by Fierté Simcoe Pride will lead to recommendations, which will be presented to police and military in the county.

Police and the GSD community in Simcoe County have enjoyed a relatively amicable relationship, but that hasn’t always been the case.

“There is a history,” Amyot explained.

In 1983, police arrested 30 men at the Orillia Opera House and charged them with gross indecency after spying on them in the washroom as part of their investigation. Names were published.

“It was a hard time for the local community,” Amyot said. “We think of Orillia as a small town now. Imagine what it was like 30 years ago.”

As the GSD community prepares, in 2019, to mark the anniversaries of two historic events — 50 years since the Stonewall riots in New York City and 50 years since the partial decriminalization of homosexuality in Canada — “it’s important to have this discussion now,” Amyot said.

“What does the next 50 years looks like and what changes need to be made going forward?”

Heat wave reminds us of the importance of trees, shade
Jul 12, 2020 11:30 AM
Comments
We welcome your feedback and encourage you to share your thoughts. We ask that you be respectful of others and their points of view, refrain from personal attacks and stay on topic. To learn about our commenting policies and how we moderate, please read our Community Guidelines.