Swimmers to cross lake for a good cause 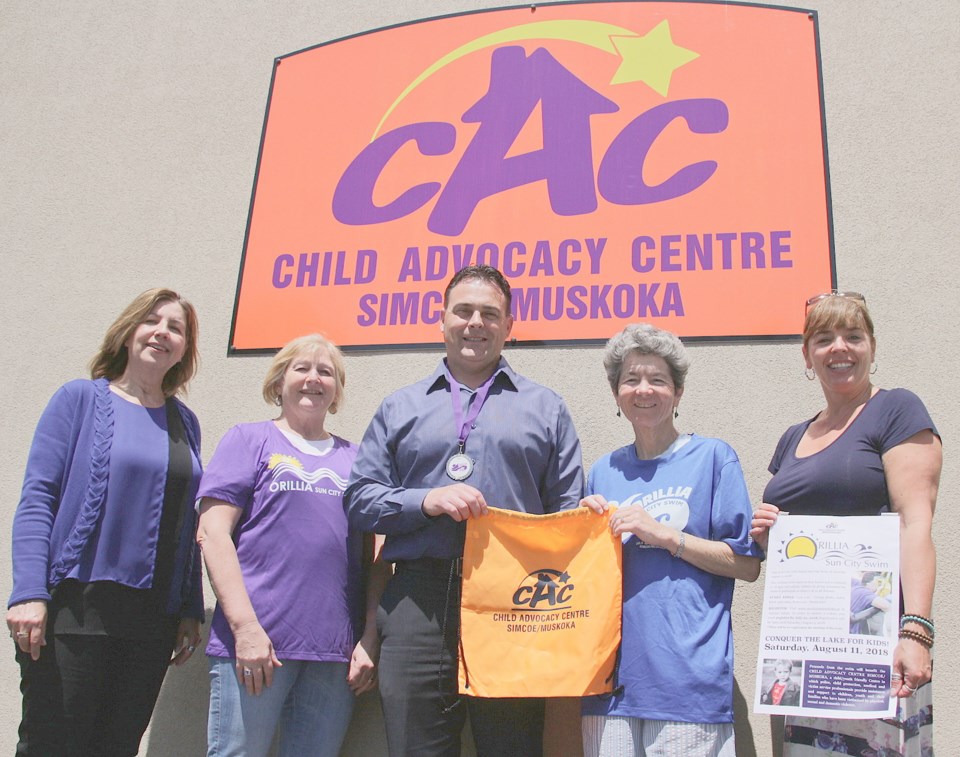 Swimming across Lake Couchiching every year is like nostalgia for Brenda Jenkins.

“I'm grateful that I'm able to do it still,” said the founder of Sun City Swim, who will be taking on the 4 km swim, starting at Fern Resort, again this year to raise funds for the Child Advocacy Centre Simcoe/Muskoka (CACSM). “I'm excited that the legacy is continuing and it's still alive and well.”

Jenkins started the swim 27 years ago as a fundraiser for non-profit organizations in the community.

“The swim has followed me in my social work career,” she said, adding there have been six beneficiaries of the swim over the years, including the Orillia Soldiers’ Memorial Hospital Foundation.

The CACSM has been the recipient since the local branch opened in 2014.

“Last year, we raised approximately $15,000,” said Tracey Carter, executive director of the CACSM. “That money directly supports the kids within this community.”

The CACSM supports youth, children and their families who have experienced physical or sexual abuse.

The centre has seen an increase in incidences of human trafficking, said Carter.

Since the Orillia centre opened, community partners, the OPP and Child Protective Services have conducted more than 600 interviews at the centre.

“We offer the youth, child and family immediate support by providing them a safe, neutral space, and helping them prepare for the interview,” said Carter. “This is a confidential space and that's a key piece in helping the young people and their families feel they can move forward.”

The centre also connects families with services in the community to heal, as well as providing support during court proceedings, which can be a lengthy process, she said.

That is why events such as the Sun City Swim, which will take place on Aug. 11 at 8 a.m., are so important, said Carter.

“This is the biggest annual fundraiser for the Orillia centre,” she said, adding it's also a fun time for swimming enthusiasts and community members. “The work we do is tough work. For us, this is an opportunity to support very important work, but also to have fun.”

For Jenkins, the biggest payouts are the physical satisfaction of achieving a goal and the emotional fulfilment she gets from seeing the money go to a community organization.

“I think what's the most wonderful thing for me is all the community spirit and the co-operation and the goodwill of all the boaters and all the volunteers,” she said, explaining volunteer boaters patrol the water and keep the swimmers safe.

Jenkins will start practising for the swim in earnest as soon as the lake water is warm enough.

When she was younger, it took her more than an hour and half to complete the swim, but now, being older than 60, it takes her more than two hours to complete, However, there is the option of doing a 4 km or 1 km distance.

“It can be a stepping stone for some who start with the 1k and then can go on to do the 4k,” she said. “Or they can cut back and do the 1k if they've been doing the 4k for a number of years.”

For more information on the Sun City Swim and to register or sponsor the event, visit cacsimcoemuskoka.ca/sun-city-swim.html or call the CACSM at 705-327-0118.

Pandemic is having a huge impact on shuttered local venues
Apr 1, 2020 6:15 PM
Comments
We welcome your feedback and encourage you to share your thoughts on this story. We ask that you be respectful of others and their points of view, refrain from personal attacks and stay on topic. To learn about our commenting policies and how we moderate, please read our Community Guidelines.