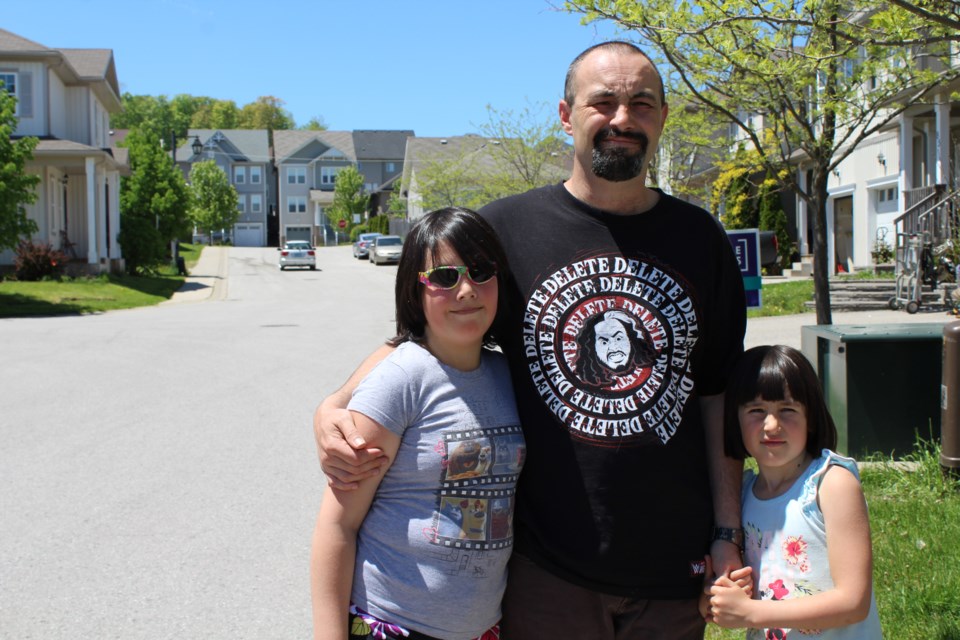 Brian Graham, shown in front of his West Ridge Boulevard home with daughters Lela and Eva, is upset that his kids will have to walk to school starting in the fall after it was determined bus service will be taken away. Nathan Taylor/OrilliaMatters

A change in busing has an Orillia man concerned about the safety of his kids and others in his neighbourhood.

Brian Graham’s four children attend Notre Dame Catholic School, and three of them take the bus. They were sent home with letters late last month informing their father they would no longer be picked up by bus at their West Ridge Boulevard home.

“I‘m worried about their safety on this walk from where we are,” he said.

The “walk zone” for elementary school students in Simcoe County is 1.6 km.

When the Simcoe County Student Transportation Consortium (SCSTC) reviewed its walk zones — something it does annually — it determined the Grahams were 1.502 km from the Atlantis Drive school.

“Walk paths are reviewed by the SCSTC on a case-by-case basis,” said John Barbato, the consortium’s CEO and general manager. “SCSTC reviews walk paths to confirm they meet with SCSTC and school board policies, applicable legislative requirements, and provide for consistent service throughout Simcoe County.”

When asked what the justification was for the change, Barbato replied, “The SCSTC scheduled reassessment of the walk zone to (Notre Dame) took place this year and confirmed a consistent walk path now exists for students to/from school from the areas affected by the change — this was one of many similar changes made throughout Simcoe County for the 2019-20 school year.”

That isn’t good enough for Graham, who is concerned about the condition of sidewalks and other paths in the winter.

“It just doesn’t seem logical,” he said, noting there are many children in that area who take the bus.

It also makes it difficult for working parents to change their schedules, he said, adding he had to turn down a couple of job opportunities because of the change, which will come into effect at the start of the 2019-20 school year this fall.

“Some of these kids are going to have to walk to school by themselves. I don’t want to have to change my kids’ school,” he said, but added he is considering it.

“If they are not satisfied with the response they receive, they may appeal the transportation decision following the appeal process outlined on the SCSTC website,” he said.

Severe thunderstorms possible this afternoon: Environment Canada
Jul 10, 2020 11:00 AM
Comments
We welcome your feedback and encourage you to share your thoughts. We ask that you be respectful of others and their points of view, refrain from personal attacks and stay on topic. To learn about our commenting policies and how we moderate, please read our Community Guidelines.