As part of Dinner à la Art, the 'uproarious' comedy She Stoops to Conquer will be streamed April 9
Mar 6, 2021 4:45 PM By: OrilliaMatters Staff 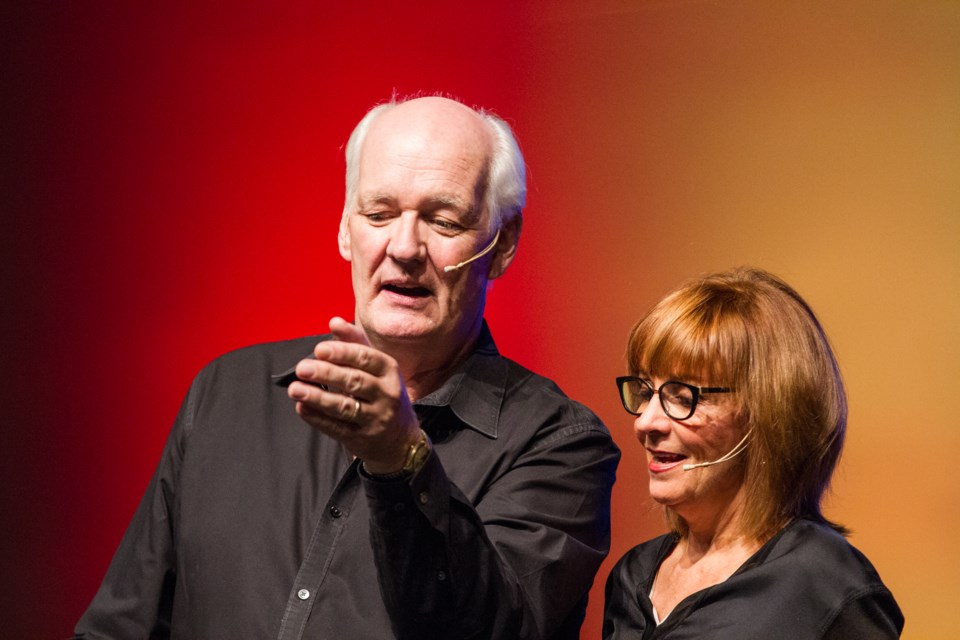 Colin Mochrie is shown with Debra McGrath in a file photo. Donna Hopper/SooToday

NEWS RELEASE
TALK IS FREE THEATRE
*************************
Talk Is Free Theatre has announced that internationally renowned comedian Colin Mochrie will star in an exclusive online event with acclaimed artists as part of Dinner à la Art. Directed by Richard Ouzounian, the uproarious comedy She Stoops to Conquer by Oliver Goldsmith will be streamed for one night only on April 9, 2021 at 7 p.m.

Colin Mochrie is best known for his work on Whose Line Is It Anyway?, and his featured roles in The Red Green Show, Murdoch Mysteries, and many more.

The cast also includes Gavin Crawford, whose television show, The Gavin Crawford Show, won the Gemini Award for comedy, and Dora Award winner Rebecca Northan, who is best known for her hilarious roles on Alice, I Think, and This Hour Has 22 Minutes. Multi-award winning TIFT alumni and Stratford leading actor Gabi Epstein will be playing a featured role along with local professional Jason Allin, whose one-person production Chaplin: About Face was commissioned by TIFT.

Joining the cast are Dora Award winning performer Malindi Ayienga, who debuted her one-person production last summer as part of TIFT’s Plural of She festival, Brendan Chandler, the current star of TIFT’s indefinitely touring production of Tales of an Urban Indian, and Noah Beemer who has performed with such companies as Young People’s Theatre and TIFT to name a few.

The price of admission to any of these exclusive readings is a $30CAD minimum purchase from one of the local participating restaurants or retailers.

Some things have not in changed in the world of romance since 1773 when She Stoops to Conquer was first performed. Egotistical men still make fools of themselves pursuing women who are far more intelligent and sensible than them.

To illustrate how contemporary this classic is, director Richard Ouzounian has assembled a cast featuring some of the finest comedians available today. The Zoom stage is set for hilarity.

The titles and stars of the remaining three readings will be announced every two days continuing March 3, 2021. Please follow Talk Is Free Theatre’s social media channels for updates.