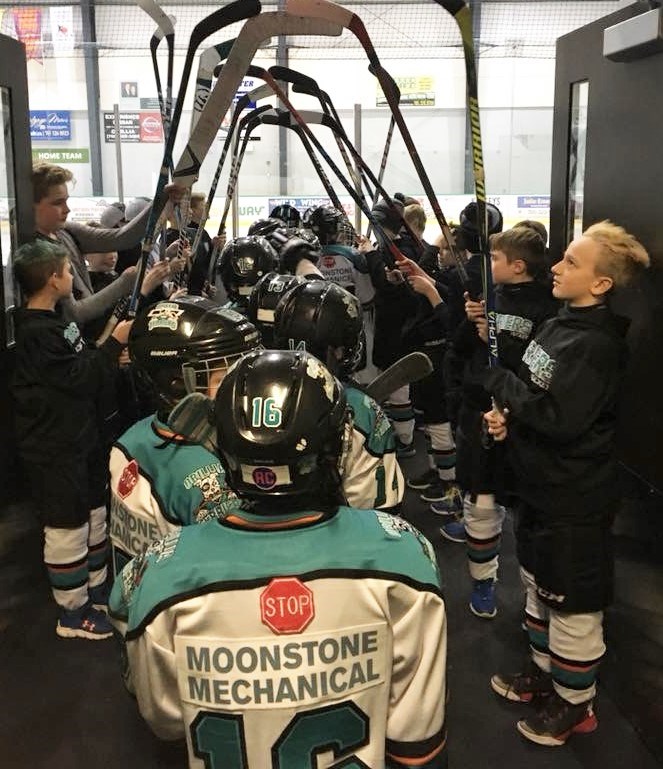 The Orillia Moonstone Mechanical novice A Terriers head out to the ice for Game 2 under the raised sticks of the minor peewee Terriers on hand to cheer on the squad.

In second round action of the Ontario Minor Hockey Association (OMHA) playdowns, the Orillia Moonstone Mechanical Novice A Terriers faced off against Simcoe County rival Barrie Colts. Barrie came out strong in Game 1, but the Terriers found the scoreboard first, when the puck deflected off a Colts player and into the net. Greydon King was credited with the goal. Hudson Inglis, Brock McKay and Ronin Black each added goals to increase the lead to 4-0. Barrie did not give up, adding a goal of their own late in the second. Eric Shellswell drove to the net to meet a rebound off of Jackson Cook’s shot, and put it up top for a 5-1 lead. Barrie answered on the next shift and scored the final goal of the game. Terriers took Game 1 5-2.

With a hometown crowd in attendance for Game 2, the Barrie Colts caught the Terriers sitting back on their heels to start the game. Barrie came out hungry for a win and the Terriers found themselves behind 3-0 after the first period. As the second progressed, the Terriers came alive and started playing their game. With four mins left in the second, Inglis put the Terriers on the scoreboard with assists to Josh May and Jack North. Orillia did not back down in the third; they dominated the play and North and Preston Tryon each added a goal to tie the game. At the end of regulation, the score was tied and the teams found themselves going into overtime. A 10-minute overtime period was unable to decide a winner, so each team took a point from the game.

Back on home ice for Game 3, the Orillia Terriers came out strong, playing a strong defensive game against the Colts. Despite being under the weather, Josh May was an offensive force, scoring a hat trick in a 4-1 win. Shellswell stood strong in front of the net and poked in a loose puck to score the fourth goal. Assists in the game went to Inglis (2), North (2), McKay, Black and Colten Sharland.

Needing a win or a tie to take the series, the Terriers travelled back to Barrie for Game 4. Seven minutes into Game 4, May picked up where he left off, putting the Terriers on the board first. May’s goal was assisted by Jackson Cook. Barrie wasn’t going to go quietly, as they scored to tie it up before the end of the first. Goalies Sam Weaver and Gunner Wolfe stayed focused and stood strong in the net, with North, Shellswell, Craig Scott, Kyson Campbell and Jackson Long supporting them in front of the net. After two periods of play, the Terriers led 2-1 on a goal from McKay. With four minutes left to play in the game, Hudson Inglis took the puck at centre, deked and stickhandled his way to the net and capitalized, making it a 3-1 game. The Terriers did not give Barrie a chance to pull their goalie, keeping the puck in the opposition’s end for the final three minutes of the game. And just as the buzzer was about to sound and the cheers were going to ring out, May put the icing on the cake, scoring with five seconds left; the assist went to McKay. The Terriers took Game 4 4-1 and will now face Innisfil in the OMHA semifinals.