Rotary Students of the Month for May are Jessica Winchester (OSS), Jack Scott (PF) and Veda Sharpe (Twin)
May 15, 2019 9:15 AM By: OrilliaMatters Staff 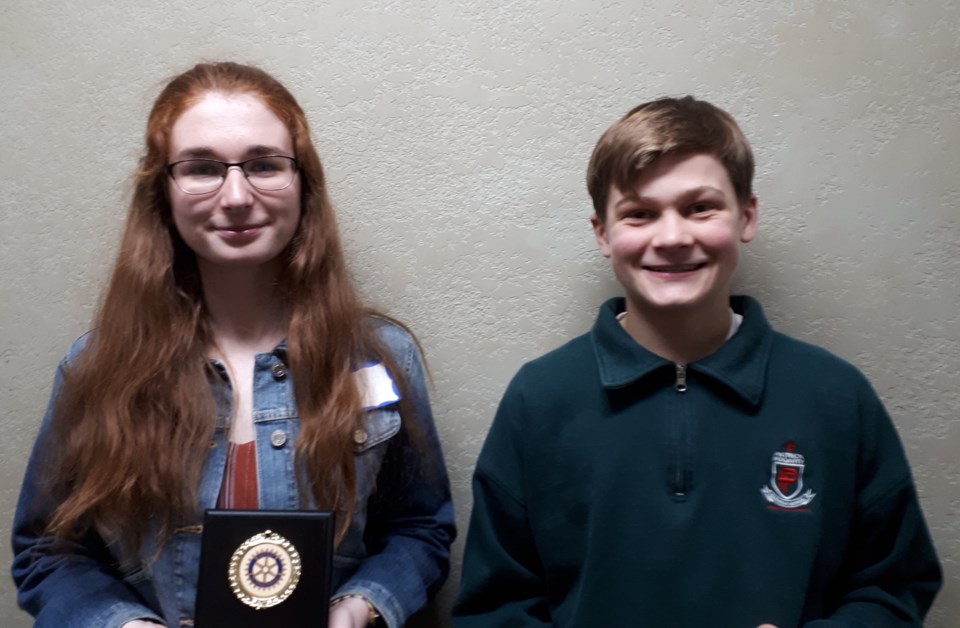 Jessica Winchester, a Grade 12 student at OSS, is dependable, hard working, dedicated, kind and caring. She has been an active member of the Music Department for the past four years and is currently on the Music Executive. She plays the trumpet in the Senior Stage Band, the Dixieland Band and she is section leader of the trumpets in the Senior Concert Band. She recently returned from a Senior Concert Band trip to Memphis and New Orleans.

Jessica has also demonstrated her leadership serving on Student’s Council for the past four years as well as the Relay for Life Planning Committee.

In addition, Jessica has been part of the Nordic ski team since Grade 9, participating at the GB level and qualifying for OFSSA in her Grade 11 and 12 years.

Despite all her many extra-curricular accomplishments, she has managed to maintain an over 80% average throughout high school. Jessica will be studying Forensic Biology at Trent University next year. Jessica was the overwhelming choice for this month’s Rotary Student of the Month at OSS.

Jack Scott, Grade 9, is an honour roll student at P.F. He is an active member of Student’s Council, he is a peer mentor and he recently participated in the Math Olympics.

At the end of May, he will also be participating in Relay for Life in memory of his grandmother.

Jack is an incredible wrestler and has medalled in all the tournaments the school attended. To ensure he was at his peak physically and mentally, he would go for a 5km run before school and practice his wrestling skills every day after school. He was a GBSSA silver medalist and qualified for OFSSA.

Veda Sharpe (Twin) will receive her award and recognition in June. She was unable to attend due to a lock down at the school on the day of the presentation. Stay tuned to hear more about Veda’s accomplishments in the weeks to come.

Congratulations to all these students on being Rotary Student of the Month for May 2019!

Man, 40, dies after being pulled from waters of local lake
Jul 5, 2020 12:10 PM
Comments
We welcome your feedback and encourage you to share your thoughts. We ask that you be respectful of others and their points of view, refrain from personal attacks and stay on topic. To learn about our commenting policies and how we moderate, please read our Community Guidelines.