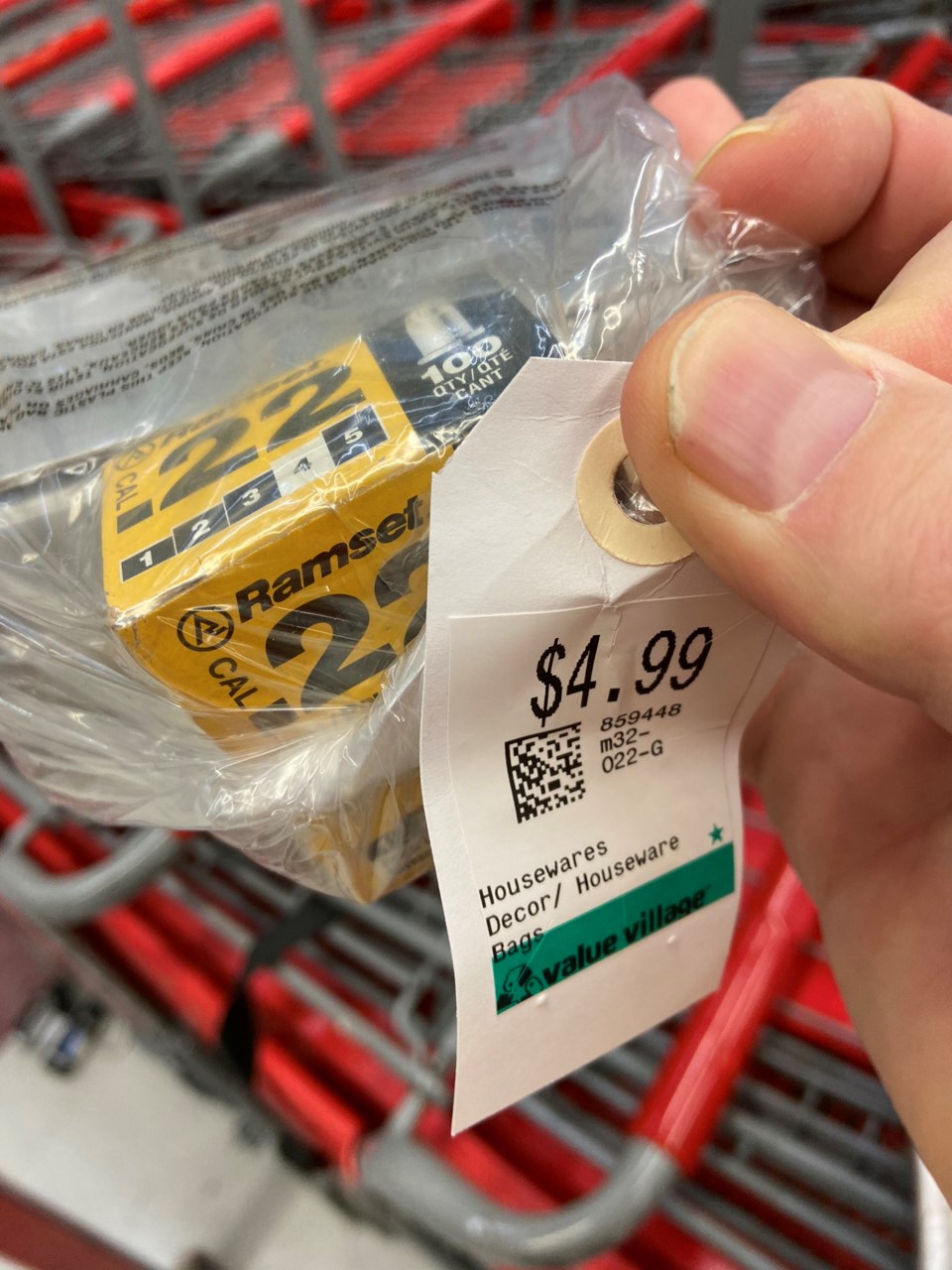 A thrift shopper at Newmarket's Value Village was surprised to find what appeared to be .22 calibre bullets on sale for $4.99 in the housewares section. Supplied photo/Kenneth Armstrong

A thrift shopper at Newmarket’s Value Village pulled the trigger Monday and handed over to store management what appeared to be a box of .22 calibre bullets packaged for $4.99 in the housewares department.

The yellow-and-black Ramset box is emblazoned with the number “.22” and, on first glance, certainly appears to contain bullets for a firearm.

But it turns out the .22 calibre gunpowder cartridges are the bullet-shaped propellants used in a powder-actuated tool, commonly known as a Ramset gun or Hilti gun, named after their respective manufacturers.

It’s a powerful and efficient type of nail gun used in construction to fire fasteners into concrete or steel without pre-drilling.

Much like firearms, the tools are known for their force and recoil. And the sale of the cartridges are subject to strict conditions that include being kept behind a sales counter or in a locked cabinet where only hardware store employees have access.

According to Natural Resources Canada, an explosives licence is required to purchase and store 50,000 or more explosives cartridges for use in these tools.

Kenneth Armstrong said the box of bullets was an unexpected find.

“I’m relieved they weren’t ammunition and happy they have been taken off the shelf and won’t be a danger to anyone who might use them improperly,” he said, adding that Value Village management appeared surprised to see the item, as well. “At the end of the day, if something very heavy had fallen on it, it could potentially explode these things, they’re explosives. My concern is that there was a possibility that somebody could get hurt.”

When reached on Wednesday, a Value Village spokesperson confirmed the .22 calibre nail gun loads have been removed from store shelves.

“I can fully understand the confusion, the company should rethink their packaging,” the spokesperson said. “When we first looked at the box, they looked like bullets. But we took it off the shelf to avoid any confusion. The package does say they are not for use in firearms."

Value Village’s store manager did not return a request for comment at the time of publication.

About the Author: Kim Champion

Kim Champion is a veteran journalist and editor who covers Newmarket and issues that impact York Region.
Read more

TIP OF THE WEEK: It's time for climate-friendly travel options
Sep 29, 2020 6:30 PM
Comments
We welcome your feedback and encourage you to share your thoughts. We ask that you be respectful of others and their points of view, refrain from personal attacks and stay on topic. To learn about our commenting policies and how we moderate, please read our Community Guidelines.