County of Simcoe brings in $782K from sale of surplus timber from Simcoe County Forests in Summer 2019, which fully funds annual forestry operations
Sep 20, 2019 7:45 AM By: Jessica Owen 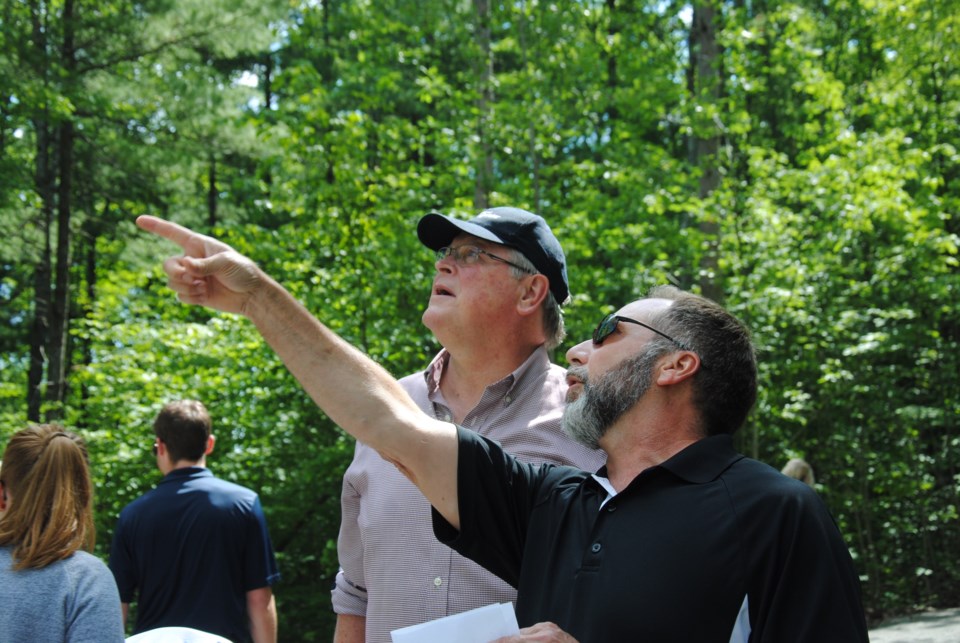 Simcoe County forester Graeme Davis points out some of the tree species in the Simcoe County Forest. OrilliaMatters File Photo

There’s one department overseen by the County of Simcoe that doesn’t cost the taxpayer a dime – and this year, they brought in big money.

The Summer 2019 timber sales report came before Simcoe County council last week, showing the county raked in $782,355 from the sales of their surplus timber. The money will go toward fully funding the forestry department’s operations for another year, with leftovers to go into reserves earmarked for future forest expansion acquisition costs.

“The forestry department is unique in that sense,” said Graeme Davis, forester with the county. “It’s a somewhat unique model even beyond Simcoe County.”

“Forestry is a long-term business. We take a long-term view here. We’re like a self-contained business unit,” he added.

Approximately 1,000 hectares of the county forests are inventoried annually. Staff determines which trees should be sold for timber. They may also recommend other treatments, including tree planting, invasive species control, controlled burning or pre-commercial thinning.

When commercial timber harvesting is recommended by staff, trees are marked and tallied and volume is estimated in order to provide detailed information to prospective buyers.

The standing timber is then sold to the highest bidder. Timber sales encompass approximately 600 to 700 hectares annually, which is generally divided into 25 to 40 individual sales.

“We assess for multiple factors before making decisions on moving forward,” said Davis. “It’s wonderful that the program continues to pay for itself. It’s tremendous that we can continue to expand the forests. Simcoe County’s model is unmatched anywhere in Ontario.”

The Simcoe County Forests were first planted in 1922 and were managed by the Ministry of Natural Resources. According to Davis, it took until the 1980s until they started operating as revenue-neutral.

“It started to pay for itself,” he said.

In 1996, the County of Simcoe took on the management of the Simcoe County Forests. Since the forests’ inception, more than 20 million trees have been planted to replenish the land.

Davis said the forests are already self-sustaining in terms of growth, and therefore don’t require replanting to make up for the trees that are cut.

“They’re designed quite specifically to be thinned out over time,” he said. “In most cases, we’re working with natural regeneration.”

“We have fairly tight criteria we look for, such as our Official Plan, looking at how to enhance the natural corridors,” said Davis.

Over the last decade, Davis estimates the county of obtained an additional 3,000 acres of forest.

From Sept. 23 to 27, the County of Simcoe is celebrating National Forestry Week. As part of the county’s celebration, they’ll be opening the Red Pine House: Forestry Education Centre, located on the Simcoe County Museum property that will house exhibits relating to the history of the Simcoe County Forests.

For more information on Simcoe County Forests and the Forestry department of the County of Simcoe, click here.

Parent presses province for answers on school-bus cleaning during COVID
Sep 24, 2020 7:30 AM

'Won't be gathering for Thanksgiving:' Trudeau says COVID-19 2nd wave underway
Sep 24, 2020 6:47 AM
Comments
We welcome your feedback and encourage you to share your thoughts. We ask that you be respectful of others and their points of view, refrain from personal attacks and stay on topic. To learn about our commenting policies and how we moderate, please read our Community Guidelines.