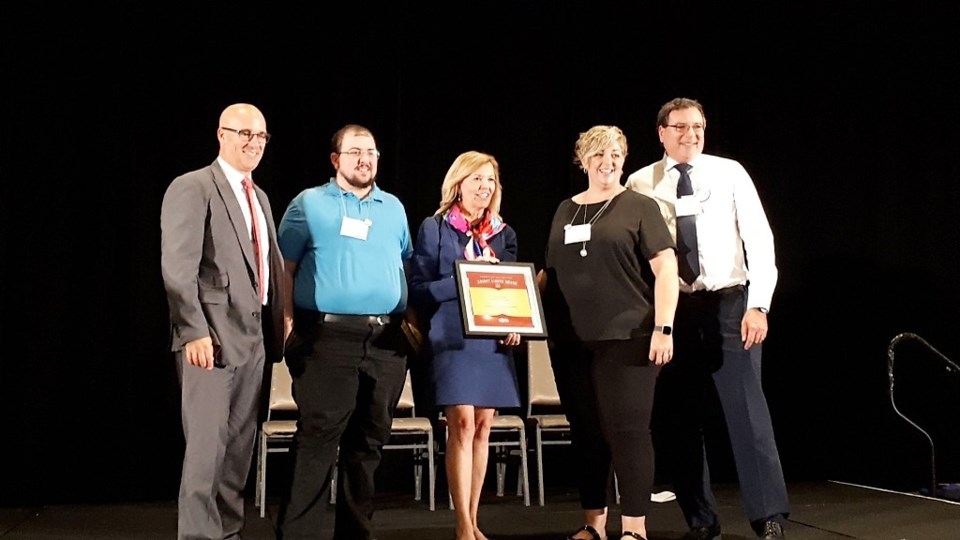 The Couchiching Family Health Team was given a major honour last week for shining a light on an under-served segment of the population.

The group won a Bright Lights Award for community and social accountability from the Association of Family Health Teams of Ontario (AFHTO) on Sept. 19, recognizing the work they’ve done on their Trans Health Services program, which launched late last year.

“I was there with our peer support navigator, and we were both pretty close to tears,” said Angela Munday, director of clinical services with the Couchiching Family Health Team in Orillia. “It’s quite an honour to be recognized by your peers to be doing something innovative and shows we are accountable to our community.”

“When I think about how little there is out there for the transgender population... it makes me very proud to work here, on a team that’s able to say we’re on the cutting edge of services that are coming out,” she added.

“(OSMH) was looking to make their services more inclusive for the LGBTQ population. They put in a proposal (for this program) to the LHIN, but they were turned down because they wanted this program to be in the community, not in the hospital,” said Munday.

“They kind of came to us in the eleventh hour and asked (us), and we said 'Absolutely,' with no hesitation,” she said.

The funding went toward hiring a four-day-per-week nurse practitioner and a full-time peer support navigator who is, themselves, transgender. The duo work in collaboration to provide the best service they can for transgender patients throughout their journey.

“Patients generally will see both of them, but it just depends on the patient’s needs,” said Munday. “The team will help them work through the patient’s thought process and help them with whatever they need.”

The reasoning behind starting the program comes from major barriers transgender people face when trying to access health care.

According to a Trans Experience Study done in North Simcoe this year, Munday said 54 per cent of transgender people avoid needed health care, 33 per cent avoid going to the local emergency department while 16 per cent will even avoid calling 911 when they are in urgent crisis.

“They’re afraid of how others will react to their identity,” she said. “That’s really what we’re trying to target with this program.”

Another component of the program sees the nurse practitioner providing training for ways to deal with transgender patients for primary-care providers, in partnership with Rainbow Ontario.

“So, we’re not only trying to provide front-line care... we’re also trying to build the capacity within our region, so trans healthcare becomes part of regular healthcare,” she said.

Munday said currently in Ontario, programs that serve primarily the transgender population are extremely rare, and ones that receive provincial funding to do so are even rarer.

This program is the only one of its kind in Simcoe County. It’s based on a project originally undertaken by The Gilbert Centre in Barrie in conjunction with a local university.

“This is the first one,” said Munday.

In the first year of the program, which officially launched on Oct. 26, 2018, it has seen roughly 90 patients reach out for care.

Looking forward, Munday said they’ve been approved for funding from the LHIN to add a mental-health therapist to the team.

“We’re excited about that because we know the rates of depression and suicide are much higher for the transgender population. That is coming in the next few weeks,” she said.

Another new addition is a speech therapist through OSMH who specializes in voice feminization therapy. It will be one of only two places in all of Ontario that provide the therapy (the other is St. Michael’s Hospital in Toronto).

“We have two people working through that therapy right now... and we are hopeful we will be able to continue to have that therapy free of charge,” said Munday.

“It felt like it was a win for the transgender population as well, who have been stuck in the dark for a long time,” she said.

Orillia Fall Fair cancelled
Jun 4, 2020 6:44 PM
Comments
We welcome your feedback and encourage you to share your thoughts. We ask that you be respectful of others and their points of view, refrain from personal attacks and stay on topic. To learn about our commenting policies and how we moderate, please read our Community Guidelines.