Three men and a presentation about birds held local naturalists enthralled at the Orillia Museum of Art and History
Jan 14, 2018 8:30 PM By: OrilliaMatters Staff 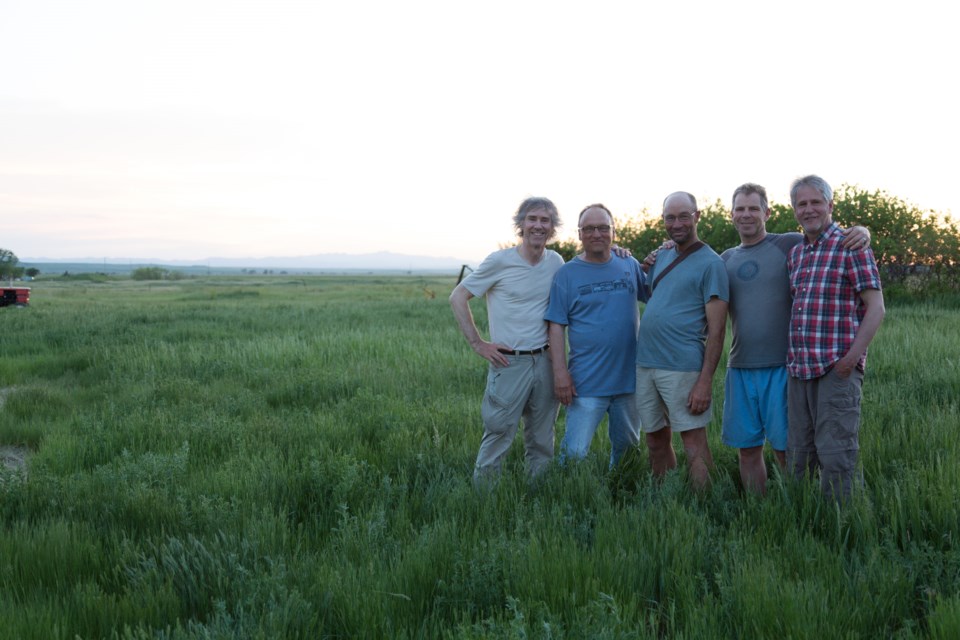 Provided photo shows Chris Evans, Mike Ferguson, Michael Melius, Ian Cook and Alex Mills, birders in the field in the grasslands of South Dakota.
NEWS RELEASE
ORILLIA NATURALISTS
************************
At the Orillia Naturalist’ Club meeting on Wednesday, Jan. 3 at the Orillia Museum of Art and History, a group gathered to hear the travels of a group of three avid birders from Barrie.

The three presenters were: Ian Cook, a naturalist since he was six years old; Alex Mills, a Simcoe County naturalist since before he was a teen who is currently a biology professor at York University teaching courses in population ecology, evolution, migration, and conservation biology; and Chris Evans, an avid naturalist, nature photographer, canoeist, and yoga instructor who is also a retired electrical engineer with Hydro One.

Their target location was in South Dakota to visit and be guided by a fellow birder,who lives in a small cabin, off the grid, and is passionate about the nature that surrounds him.

They were joined by Mike Ferguson, a keen birder from Oshawa.

It was a trip to the Great Plains, the Badlands, and the Black Hills of South Dakota. They returned by way of the Ontario Rainy River District. Sometimes they were two, or five, or sometimes they were three, but they were all crowded, with their camping gear, in a Dodge Caravan.

They saw and photographed some wonderful sights, which they shared with us. We were all sorry when the presentation came to an end.

They were looking for western grassland birds especially, birds that may be similar to ones that are here, but have differences. They crossed the Mississippi and the Missouri Rivers, and then reached the grassland of South Dakota.

It looked like a sea of long grass spotted with sage brush. Here they found unique birds, not spectacular but unique. Some of their favourite birds were species of sparrows, with very interesting calls, which they played for us. We realized what a different experience it would be to be surrounded by these different calls. Long-billed Curlews are specialities of the west. Their curved long bills probe into deep holes in the earth to find and eat insects. Prong horned Antelope were seen frequently.

They moved on to the Badlands National Park. Prairie Dogs were common, only in parks,and their burrows create the habitat for the Burrowing Owl – a small owl which lives underground, and is a favourite of everyone .

When they went to the higher elevations in the Black Hills, they saw and heard Rock Wrens, and Canyon Wrens in still higher locations.

They crossed into Canada to visit the Rainy River district, where White Pelican breed, then along the north shore of Lake Superior, and were especially impressed by Neys Provincial Park – a hidden gem.

Throughout the trip they saw four species of grouse. In the grassland they watched the Greater Prairie Chicken display on a lek (a display ground) and had videos of this, almost unbelievable. They were able to get quick views of the Sharp-tailed Grouse, which have a similar type of display (the closest lek is Manitoulin Island), Ruffed Grouse are common. A highlight was a spectacular view ( and video) of a Spruce Grouse, with his black ruff of neck feathers, strutting around their feet, unconcerned about the birders’ presence. Spruce Grouse are known in Algonquin Park, but few have seen their display.

We were reminded how lucky we are to be so close to the jewel – the Carden alvar, where some of these western birds can be seen (eg. Sedge Wren).

The guest speaker will be Ryan Post on the topic: Hydrogeology: the underground foundations to ecosystems

He will focus on the examination of the geology and hydrogeology, of the Nottawasaga Valley Conservation Watershed, especially as it applies to the Minesing Wetlands.