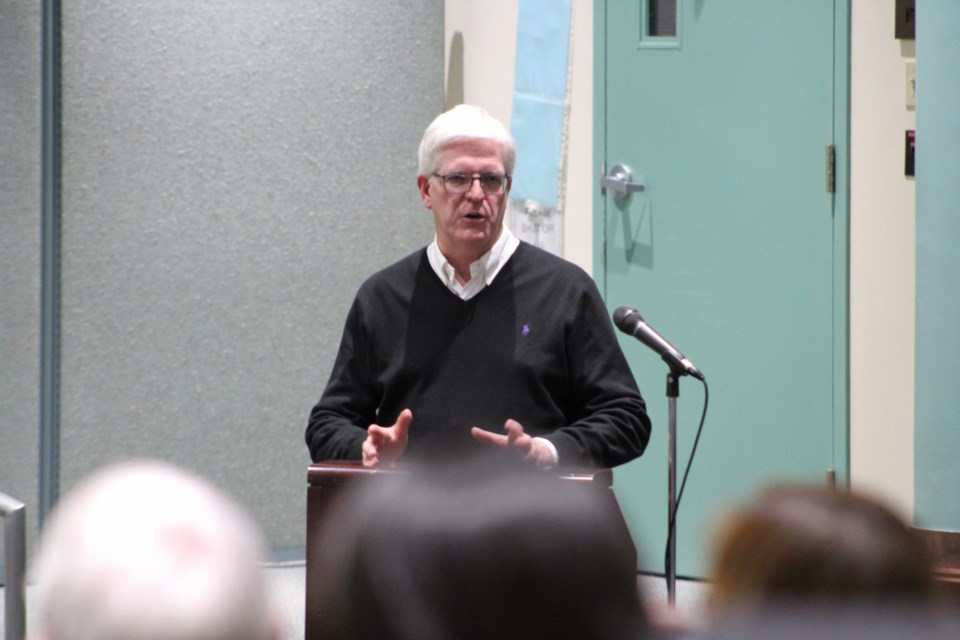 Bryan Smale, of the University of Waterloo, speaks Monday at city hall during the kickoff of the Community Wellbeing Survey. Nathan Taylor/OrilliaMatters

Orillia has an opportunity to make history when it comes to gauging the well-being of area residents.

A kickoff event for the Community Wellbeing Survey was held Monday at city hall, where the researchers behind the Canadian Index of Wellbeing (CIW) explained how survey results can help inform decisions and policies that lead to meaningful change in communities.

To get to that point requires co-operation among multiple partners, and Orillia is well on its way.

The effort, headed by Information Orillia, already has the support of the City of Orillia, County of Simcoe, Orillia Police Services Board, Simcoe Muskoka District Health Unit and the Local Health Integration Network. Georgian College and Chippewas of Rama First Nation are considering signing on as partners. If they do, it will be a first in Canada.

“It would be the first time the CIW has garnered a student perspective and an Indigenous perspective,” explained Michael McMurter, chair of Information Orillia.

The survey will be undertaken in May and June.

“It’s timely because the province has just mandated that municipalities must come up with community well-being plans,” Mayor Steve Clarke noted, describing the survey as “a stepping stone” toward that goal.

Bryan Smale, of the University of Waterloo, is the CIW director. He said the CIW, which “has proved to be successful in communities,” strives to find out what issues are important to the various segments of the population in each area. However, because the CIW is nation-wide and doesn’t reflect the unique needs of individual municipalities, the survey is a useful tool.

One of the goals is to collect data that represent the marginalized population, including the homeless. That’s where a partnership with a food bank, for example, comes in handy.

“Where do homeless people get clean water?” he said.

The survey results provide solid evidence that can be used by decision makers to address areas of need, he said. For example, the Ontario Trillium Foundation, which provides more than $130 million a year in grants, has been using CIW data to assess the impact of that funding.

Coun. Ted Emond, who is on the board of Information Orillia, is excited about the survey and the opportunity to look at local issues from a perspective other than financial.

“The greatest frustration I’ve had is that when people come to us seeking a grant or a proposal … I have to make an assumption about what the (social impact will be),” he said.

Implementing this survey will be “a wonderful legacy” in the area, he added.

The need for solid evidence is urgent, Smale explained, citing a University of Waterloo study that showed the country’s GDP has steadily increased since the 2008 recession while well-being “has flatlined since then.”

To address those issues at the local level, co-operation is key. As an example, though not connected to the CIW, Smale recalled a conversation he overheard at a coffee shop in another town between a food bank director and a municipal arts and culture director. The latter wanted to get people interested in the arts at a young age, particularly those from low-income families who might not have as much access to arts programs. The food bank director saw an opportunity that would help both of them. He offered space at the food bank for the municipality to host that programming. Some people are reluctant to use the services of a food bank — a matter of dignity — and a program like that would give parents another reason to visit and, while there, “pick up a few things” from the food bank, Smale said.

While a partnership with Georgian College and Rama First Nation would be the first of its kind in Canada, Orillia is already bucking the trend. It is the only municipality where the survey is not being spearheaded by the local government. Information Orillia is a non-profit organization, which will ensure continuity regardless of who is elected to city council.

The survey will include a random sample of 25% of the occupied households in the participating municipalities. If Rama joins the effort, a census survey will be used because of the small number of households.

A report will be issued to each municipality.

More information about the CIW can be found here.