What does the future hold for the Leacock Museum? 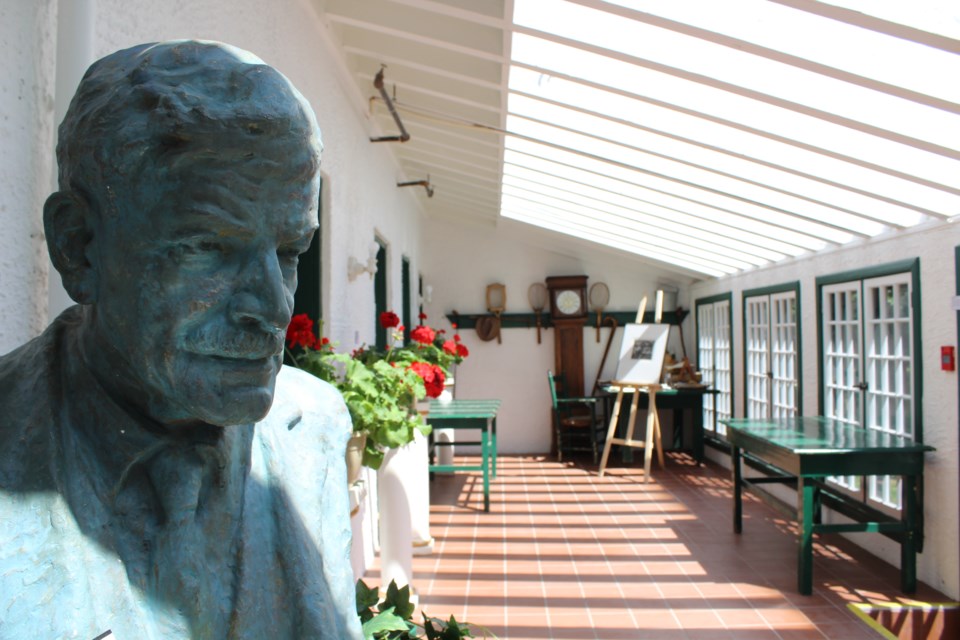 A bust of Stephen Leacock sits in the sunroom of the late humorist's home in Orillia. Nathan Taylor/OrilliaMatters

And is a museum in his honour worth supporting?

Those are questions city councillors grappled with recently during budget deliberations when they were asked to pony up $70,000 for a masterplan that focuses on the future of the Leacock Museum.

There was much debate and lots of differences of opinion, but in the end, council approved the expenditure; the money will come out of the Leacock Home Reserve Fund.

Leacock, one of Canada’s most famous authors and humourists, died 75 years ago. His books, including Sunshine Sketches of a Little Town based on his adopted hometown of Orillia, cloaked as Mariposa, continue to resonate.

But his former lakeside retreat on Brewery Bay, on the shore of Lake Couchiching, where he loved to write, is not exactly a hot spot these days.

Last year, the facility generated just $22,500 in gross admission fees, which are collected in the form of donations from visitors. The idyllic property, which also boasts Swanmore Hall and a cafe, ran a deficit of about $281,000 last year.

While there was a consensus that the museum and property could be better used, Coun. Jay Fallis said he was not in favour of spending $70,000 on a plan.

“This money is much better spent on the museum itself rather than analyzing how we make it viable,” said Fallis.

The rookie Ward 3 councillor said many citizens have told him the city should not be in the museum business and believe Leacock is no longer relevant.

“I think those should be debunked,” said Fallis. “It’s really important we realize history is relevant, that protecting our city’s history is of the utmost importance.”

However, he said the money would be better spent on redeveloping Swanmore Hall, calling it an “opportunity to invest in a really important institution in our city.”

Ward 4 Coun. Tim Lauer also opposed the masterplan. He was on council in the late 1990s when the Museum 2000 and Beyond study was developed. It was full of grand ideas and visions, fell apart and was never acted on.

“At this point, I’m not in favour of spending $70,000 just to create, perhaps, a plan that won’t really be all that feasible,” he said.

He said he loves the museum and the property.

“My own feeling is I love the place the way it is right now,” said Lauer. “It’s a park ... a really nice place to go. I don’t think we have to make it into a circus.”

Ward 4 Coun. Pat Hehn said she sees “such potential” in the site.

“It’s lost is oomph and it needs help to get it back,” said Hehn. “If it is going to take a study … to keep it vital, then I support it.”

He said “there are opportunities there to vastly improve the ability of that park to deliver services to our community, but we need professional help” to guide the process.

“We need to look at revitalizing this property and breathing new life into it,” said the mayor, who credited staff for its “phenomenal, energetic efforts. Yet despite that, the property is struggling for that kind of vibrancy. When we’re contemplating $22,000 in gross revenues a year, I think it’s an issue.”

Lauer countered it’s “premature” to create a masterplan. He suggested Orillia Museum of Art and History (OMAH) officials, who have transformed that institution into a success story, could collaborate with Leacock museum staff before seeking outside help.

Coun. Mason Ainsworth agreed. He said he would rather see a working group of staff and community stakeholders created to guide the process.

Lauer said creating a master plan and hosting workshops “sounds nice” but he believes, in the end, the city will “over-promise and under-deliver.”

“I think it’s just a bit misleading to invite the public into this kind of format at this particular point, paying $70,000 … and then just let it sit on the shelf because we can’t afford to do anything.”

However, a majority of council were in favour of the initiative.

According to a report to council, the scope of the work will involve “a full facility audit that looks at the site’s current uses in relation to industry standards and trends for the purpose of developing a strategy to optimize the use of the property, improve the visitor experience and meet the needs of the community.”

The plan would consider all of the site’s facilities including the grounds, gardens, boathouse, museum and Swanmore Hall.

The process is expected to take 10 to 12 months and would include: