Where will Orillia's next leash-free dog park be located? 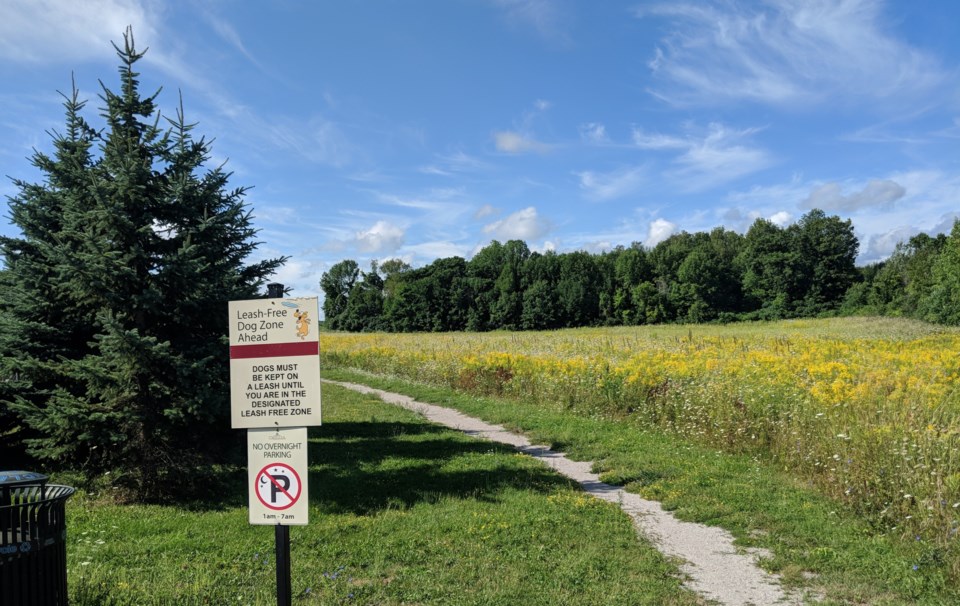 For dogs, this is like a path to heaven as it leads to the leash-free zone at Clayt French Park in west Orillia. Dave Dawson/OrilliaMatters

Orillia won’t be going to the dogs any time soon.

The city currently has two leash-free dog areas - at Clayt French Park and at Kitchener Park. They are popular destinations for dog owners.

While there has been some chatter about adding a third dog park to the inventory, there are no plans - at this point - to do that.

However, to prepare for that possibility, city staff, along with members of the recreation advisory committee (RAC), have developed a policy governing the creation of the dog-friendly areas.

In essence, city staff reported at this week’s council committee meeting, a leash-free dog area requires a minimum of one acre, must be fenced, must be ‘buffered from adjacent land uses’ and ‘buffered from internal’ park uses while being compatible with the park’s design and layout. In addition, there should be supporting amenities, staff noted.

Based on these new guidelines, only six city parks were deemed eligible for a potential leash-free area:

But that doesn’t mean dogs should be wagging their tails in anticipation of new play areas.

It just means that when any of those six city parks are designated for improvements, a leash-free dog area would be considered as part of a site-specific analysis.

Currently, only Foundry Park and Morningstar Park are eligible parks that are also designated for improvements in the city’s 10-year capital plan.

“I know previously council has talked about adding a third dog park to our inventory,” said Ainsworth. “It’s nice that, especially moving forward, we do have an area we can look at and say, ‘This is the criteria moving forward’ ... and we also have some options, potentially, to look at in the future.”

Ainsworth said it’s a step “in the right direction” and is an issue that can be explored during budget deliberations.

Cipolla, however, said he was disappointed Scout Valley wasn’t more of a priority.

“Some parks on the list are close to residential areas,” said Cipolla. “We have an opportunity here for Scout Valley (which is) 200-plus acres.”

Cipolla said he spoke with naturalist Bob Bowles who is in favour of a leash-free trail at the park.

However, Ray Merkley, the city’s manager of parks, recreation and culture, noted the Couchiching Conservancy oversees stewardship of the city-owned park.

“If we were to try to (create a leash-free dog area) inside Scout Valley, certainly the Couchiching Conservancy would have to have input into that,” said Merkley.

“(Scout Valley) is one of the six that made the list that would be considered feasible,” said Merkley.

However, he noted it is not “currently within the 10 year budget plan.”

According to the report, parks that were smaller than 2.5 acres were deemed ‘undersized’ and not big enough for a dog park. Those parks included:

Parks with less than one acre remaining outside of the required buffers from existing uses and/or borders residential areas were also removed from consideration. They included: