COLUMN: Across Canada, on Cooch ... there's something in the ice

With a wicked winter vortex well underway, although welcomed, too, by a wind-free, bright blue sunny day, pristine were the conditions for Orillia’s Hockey Day.
Feb 27, 2021 12:30 PM By: John Epstein 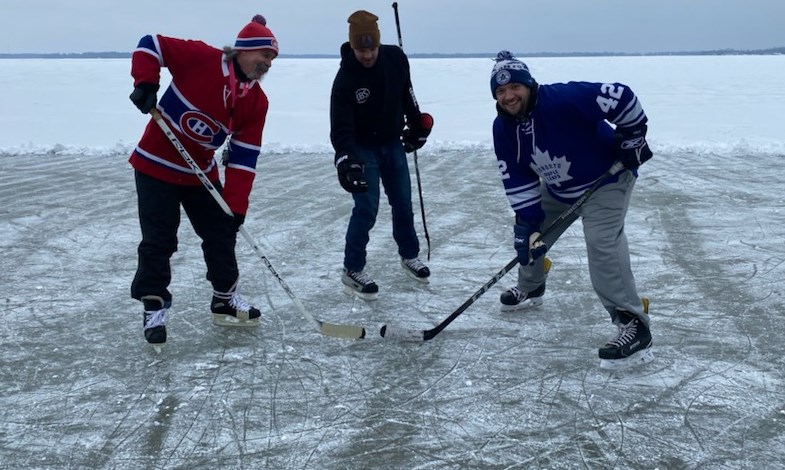 A slice of classic Canadiana ... there must be something in the ice, says columnist John Epstein, left. He will face off with readers in a regular monthly column - starting today.Supplied Photo

Editor's Note: We welcome a new columnist to the OrilliaMatters team today. But John Epstein won't be new to many of you; he was a popular regular columnist at The Orillia Packet & Times. The long-time local restaurant owner, who has been deeply involved in the community since arriving, will be contributing a monthly column starting with today's offering about Hockey Day in Canada and its echoes in communities like Orillia.

With a wicked winter vortex well underway, although welcomed, too, by a wind-free, bright blue sunny day, pristine were the conditions for Orillia’s Hockey Day. Moreover, Hockey Night in Canada’s marquee matchup, the Leafs versus the Canadiens, was set for two Saturdays in succession. What could be better?

However, there was sad news with the passing of former Montrealer, Ralph Backstrom, at age 83. In the prose of Ken Dryden’s great book, The Game, he regales of Backstrom and Henri Richard cutting the diamond-hard, clear ice to shreds, slicing this way, skating-and-chasing that way, keep-away with the puck, at practice one day.

Dryden describes the escapade as so spectacular, that all on the ice stopped in awe at the display.

Backstrom hailed from Kirkland Lake, known for its productive mines, and its production of hockey players. Off-the-shelf, or by catalogue, the tough little town has offered NHL GMs, skaters, and scorers, and scufflers for years.

They’ve even inventoried brother sets, among them – Larry and Wayne Hillman, and the Plagers, Barc, Bill, and Bob – sounds like a western. Even the Mahovliches of Timmins, came to town for a game now and then.

I like to think that it’s all in the ice, like Dryden described, a slight twist on that ‘something-in-the-water’ thing.

Here in Orillia, so smooth was the ice on ‘Cooch’, that some rookies who had set up an east-west facing rink on Saturday, rotated it on Sunday, so that pucks that were ‘iced’, slid no more to Mnjikaning.

Bass Lake, not to be outdone, boasted a makeshift Zamboni and magnificent ice as well. Both ‘ponds’ offered a handful of games, with wide-ranging skills, and everyone playing magically like they did when they were 10.

At Lake Tahoe, it was altogether different for the NHL’s outdoor game. Its ice surface paled in comparison; actually, it just melted. Conversely, in Canada the winter sun’s for light, not heat.

That NHL game would’ve best been played in boots.

And, whatever that was that Texas tried, it failed fantastically. Ice is best outside, not inside, unless it’s for a Cancun Cruz, Rum-n-Sun-Run, now the Lone Star State’s latest bar craze.

Back at Lake Tahoe, a local braggart was heard stating that it was soon to be christened one of the Great Lakes. Now, I can gaze at a map for hours on end, so that half-day, between-periods intermission proved perfect. I grabbed a favourite book, Maphead, to check out that silly claim.

It also showed the outline of Lake Michigan to be identical to that of Sweden. There’s cooler stuff still, like Wisconsin’s a mirror image of Tanzania, though to me, the latter’s more certainly the Soviet, Leonid Brezhnev.

I flip further on so as to scrutinize that ‘Great Canadian Rectangle’ some call Saskatchewan (SK). Wow, have a look – flood it, freeze it, and it’s a friggin’ rink. Ok, so the corners are not ideal, they’re hard and fast, and overly sharp for sure, but so are SK-born, Gordie Howe’s elbows, and, we’ve all been raised to revere them, the Canadian equivalent to that American benevolence shown Abe Lincoln’s beard.

I’m studying Saskatchewan because I’ve encountered a bizarre theory that’s attacking Canadian hockey supremacy. It must be an Olympic year, then again, we are in the Age of Conspiracy, and there’s support for this connivance growing in Congress.

So, as every Canadian knows, all of our hockey rinks are precise miniature replicas of our ‘Great Canadian Rectangle’. Per the tradition of our ‘Grand White Northness’, Canadian teams start every international hockey game defending from the north end of the rink, meaning, we do so for two of the three periods. With me?

Now, there’s this Dark Web Dude (DWD) emphatically frothing that Saskatchewan’s not a rectangle, but, that it’s actually a quadrilateral, whatever that is. I suspect that DWD and Tahoe-Guy are one and the same.

The crux of his conjecture is that the north-end of all of our country’s rinks is a few degrees narrower than the south, and thus easier to defend. Moreover, whether the locale of the game is foreign or domestic, the ‘Ice Guy’ that signs off on it is always Canadian.

There’s more … that Loonie-at-centre-ice thing? Quaint as it may be, DWD’s calling it a charade to distract while the boards are put in.

There’s been talk of the U.S. contesting Canada’s medals, and, Lord have mercy, rumours of an asterisk for SK-native, Johnny Bower’s 37 shutouts! This matter’s surely headed to Canada’s Supreme Court; do we even have one?

Let the conspiracists, the courts, and the cartographers do as they may, there’s no such thing as a quadrilateral anyway; latitude and/or longitude, legislate away.

For, when those Olympics roll around here again, we’ll ride those Hillman-Plagers, maybe with the Mahovliches, Backstrom, Bower, and Howe, in the fold. It’s certainly a recipe for pond hockey gold.

Some of our guys, they’ve gone on now, but they’re not so far away as to not play on such a day.

John Epstein is a former, 25-year Orillia business owner who left southern Ontario for the north years ago, and has never been back. He is now a freelance writer, whose column will appear monthly in OrilliaMatters.