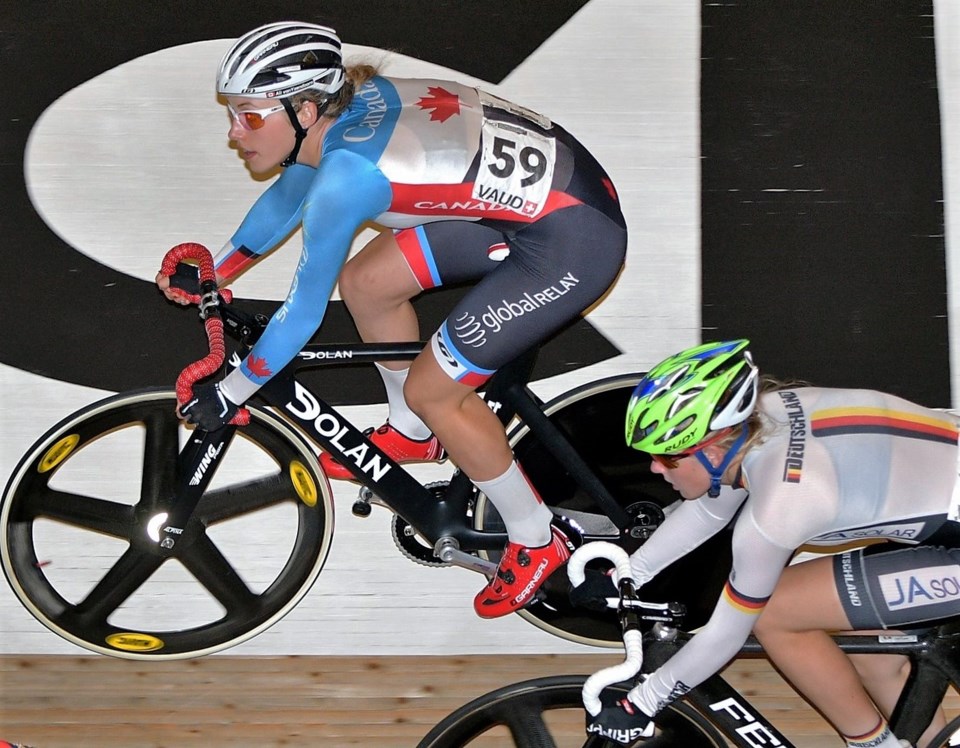 Ali Van Yzendoorn, shown competing at the world track championship, is one of six nominees for Orillia's Athlete of the Year award.

Editor’s Note: Six accomplished athletes have been nominated as Orillia’s top athlete for 2017. Over the next several days, OrilliaMatters will profile the nominees. Today, we feature Ali Van Yzendoorn.

When it comes to cycling – on the track or on the road – Orillia’s Ali Van Yzendoorn is among the world’s best.

While those performances were exceptional, Michael Suraci, the high-performance manager of the Ontario Cycling Association, said Van Yzendoorn is more than just a great athlete. “(She) is a role model,” he wrote in a letter supporting the cyclist’s nomination as Orillia’s athlete of the year. “She leads by example, giving 100 per cent effort at every training session and always striving to improve.”

On top of that, the 19-year-old brings a positive approach to training and competing. “It is rare that Ali isn’t wearing a big smile on her face and creating a positive presence at every training session,” said Suraci. “She has been one of the most grateful athletes that has come through our programs, always taking time to thank coaches and other who have supported her development.”

Marg Schreurs, who nominated Van Yzendoorn for the city’s top athletic award, said the driven local athlete “is very passionate about cycling, training tirelessly on a daily basis. She awakes very early every day to ensure she completes the required training and distance for the day, often riding 100 kilometres before going to school. In winter months, she trains on her bike trainer in her home or trains at the Velodrome, which is a three-hour return trip from Orillia.”

She always ensures safety is a priority in “this risky sport” and strives to live a healthy lifestyle. “She eats very clean and healthy to maintain her physical health and she regularly attends physio appointments to manage and prevent injury,” said Schreurs.

Despite a busy training schedule and the demands of her first year of studies at the University of Waterloo, Van Yzendoorn always finds time to help others. In 2017, she volunteered with the local GIRLSTRONG program, a running, empowerment and healthy living program for girls in grades 3 to 8. She also assisted at the Sun City Swim, volunteered at the Soldiers’ Memorial Hospital Gala, and is currently mentoring younger cyclists. In November, she “made a special trip back to Orillia from Waterloo to be the guest speaker at the Ontario Winter Games” media event.

“Ali is an amazing young lady,” said Schreurs. “She has many wonderful qualities, one being that she always has a positive attitude and is willing to help others; whether it be sport related, peer related, fundraising for other organizations, assisting with extra-curricular activities. Ali is always willing to help and always with a smile.”

Despite her success, she remains humble, said Schreurs. “What impresses me the most is how gracious and humble she is. She has competed provincially, nationally and internationally. When she is congratulated or acknowledged for her efforts, she is very sincere in her thanks, almost shy. She doesn’t gloat, she doesn’t over-react, she is simply grateful and humble, and that speaks volumes.”

The athlete of the year is chosen by a nine-member panel of local judges. The award will be handed out during a meeting of City Council Feb. 12. The award was first presented in 1952 after Norm Davis created a trophy for the honour. Past winners include Walter Henry, Bill Watters, Brian Orser, Jerry Udell and Ethan Moreau.