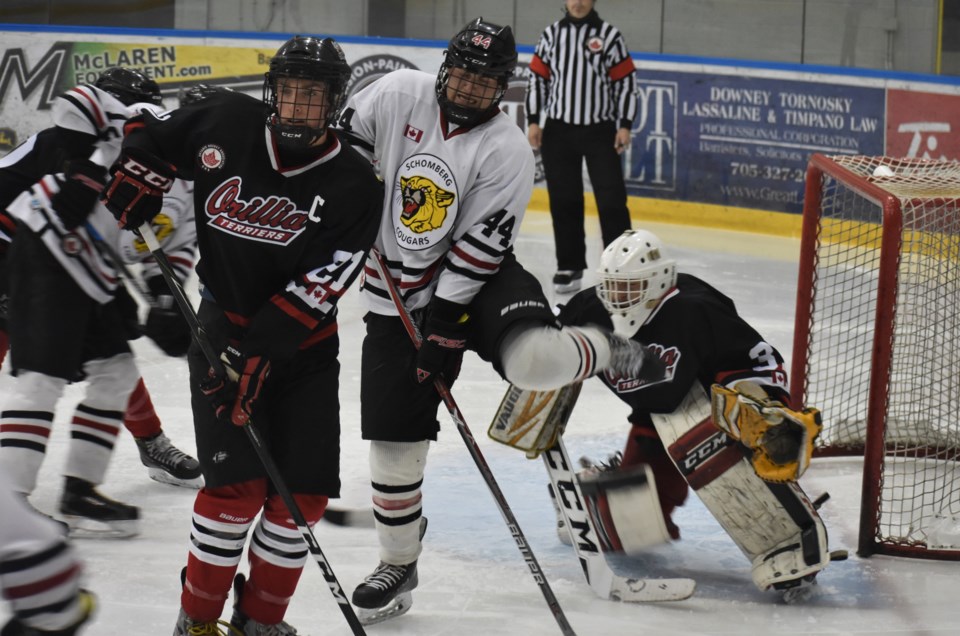 Orillia Terriers goalie Derek Haourt will have his hands full as his team battles the Stayner Siskins in the first round of the Provincial Junior Hockey League playoffs. Haourt is shown above trying to see through a screen as defenceman Konnor Blimke tries to block a shot during a late-season game against Schomberg. The first-round series begins Thursday night in Stayner with Game 2 slated for Saturday night at 7:30 p.m. at Rotary Place. Dave Dawson/OrilliaMatters

To say the Subaru of Orillia Terriers are facing a David vs. Goliath battle in the first round of the Provincial Junior Hockey League playoffs may do a disservice to the biblical fable.

The Terriers completed the worst regular season in their history on Saturday when they were crushed 10-3 by Midland. It was a game that typified their season. The Terriers finished dead-last in the North Carruthers Division after a dispiriting 4-37-0 season.

Perhaps the worst thing about finishing last is that they now face the first-place Stayner Siskins in the opening round of the playoffs. Stayner was as close to perfect as you’ll find in Junior C hockey. The deep, tough and talented team finished the season with a 40-2-0 record, easily the class of the league.

When it comes to specialty teams, the Siskins dominated. Stayner’s power play operated at a 27.75% efficiency compared to Orillia’s 7.85%. The Siskins penalty-killing unit was impressive, killing off 90.27% of penalties; Orillia’s was worst as they killed off just 71.43% of penalties.

Goaltending was another telling difference between the two clubs. Stayner’s Marcus Semiao was first in wins (25), first in goals against average (1.69) and first in save percentage (.946). As you might imagine, the Terriers’ netminding duo were at the opposite end of the spectrum. Derek Haourt sports a 6.97 GAA and a .847 save percentage in 24 games while his partner, Curtis Penwell, ended the regular season with an 8.87 GAA and an .813 save percentage.

JD Falconer led the league in scoring; the Siskins star amassed 103 points and had a league-high 56 goals. For the Terriers, veteran Corey Miller was the top forward with 10 goals and 21 assists.

The best-of-seven series kicks off Thursday night in Stayner. Game 2 will be played Saturday night in Orillia. Game time at Rotary Place is 7:30 p.m. The Terriers will also host Game 3 on Tuesday, Feb. 6 at 8:20 p.m. Game 4 shifts back to Stayner Feb. 8. If necessary, a fifth game will be played in Stayner Feb. 11 with a sixth game slated for Rotary Place Feb. 13 while a seventh game would be held Feb. 15 in Stayner.