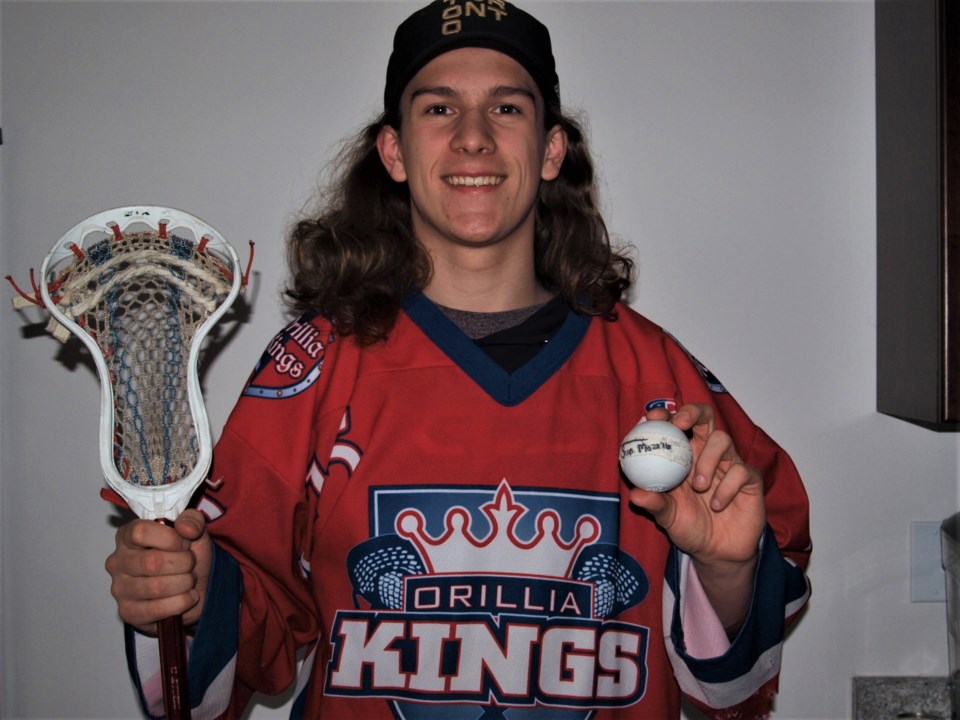 Michael Montgomery has been nominated for the Orillia Athlete of the Year award. Dave Dawson/OrilliaMatters

Editor’s Note: Six accomplished athletes have been nominated as Orillia’s top athlete for 2017. Over the next several days, OrilliaMatters will profile the nominees. Today, we feature Michael Montgomery.

Possessing a lethal blend of skill and speed in addition to smarts, a dedication to hard work and a passion for lacrosse, it’s no wonder Michael Montgomery was selected 15th overall by the Peterborough Lakers in last year’s Ontario Jr. A Lacrosse League midget draft.

They saw in Montgomery a raw young player with talent. And he was a winner. He was a key member of the Orillia midget squad that won a provincial championship. Last summer, he made the jump to Jr. B lacrosse and made an almost seamless transition, scoring 14 points in 20 games and earning rookie-of-the-year honours with the Experience Nissan Kings.

And while he loves the fastest game on two feet – he began playing when he was three – he is not a one-sport wonder. Montgomery, who describes himself as a “gym junkie”, has played multiple sports while attending Twin Lakes Secondary School, where he is also a regular on the school’s honour roll.

“I have taught and coached (Montgomery) on multiple occasions over the last four years,” said Twin Lakes teacher Andrew Corry, who wrote a letter of support for the 17-year-old’s athlete of the year nomination. “As a student, he has earned the top mark in my class each time I have had him in my class thanks to his insight and hard work.”

Corry has also coached the driven teen who has been one of the school’s top track and field, volleyball and basketball players over the past four years. “He has been my basketball MVP and continues to thrive as our team captain and best all-around player this season,” said Corry. And, in every sport Montgomery “has always been a fierce competitor … leading our volleyball, basketball and 4 x 100 teams to many victories.”

In addition to his athleticism, he is also a leader. “He has been a consistent, mature and reliable leader during big wins and tough losses,” said Corry. “Most importantly, he has demonstrated excellent character while competing before, during and after games.”

While Corry has been impressed with Montgomery, he said “perhaps the most impressive aspect of Michael’s athletic endeavours is that despite all of his success in all of the sports he has played at Twin Lakes, he has not even represented our school in lacrosse which happens to be his best sport – the sport he has been drafted for and will play at the collegiate and, probably, the professional level.”

Amanda Tevelde, who nominated Montgomery in conjunction with Corry and Nicole Marwick, says the local teen is always willing to help others. “When he sees someone in need of help he will be the first one to jump and help out,” she explained. “He is able to lift his teammates up when they are down and he is the first to give another player props when needed.”

For Corry, Montgomery is worthy of the city’s top athletic award. “When I think of all of the characteristics that define an Athlete of the Year for a school, a district or a city, there is no better choice that Orillia can make than Montgomery,” said Corry.

The athlete of the year is chosen by a nine-member panel of local judges. The award will be handed out during a meeting of City Council Feb. 12. The award was first presented in 1952 after Norm Davis created a trophy for the honour. Past winners include Walter Henry, Bill Watters, Brian Orser, Jerry Udell and Ethan Moreau.