Braedan Downer was a spark plug offensively and a leader off the ice; 'His leadership is unmatched and his peers truly look up to him,' says coach
Oct 17, 2020 7:00 PM By: Tyler Evans 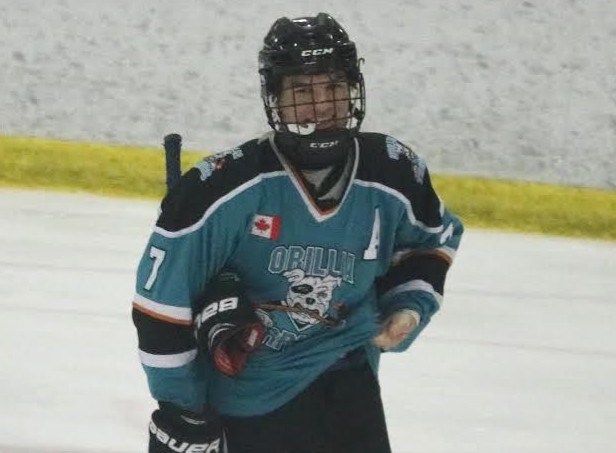 Last year the Orillia Terriers Major Midget A team made it to the Ontario Minor Hockey Association (OMHA) championships after finishing with a 54-4-4 record in the regular season, tournament, and playoffs combined.

One of the key contributors to the Terriers' success, from an offensive and leadership standpoint, was left winger, Braedan Downer.

The Patrick Fogarty Catholic Secondary School graduate netted 37 goals and 20 assists in 34 games last season, which was tied for the lead in points for the York Simcoe League.

The statistics don't mean much to Downer.

“I could have scored zero goals and had zero assists, as long as our team won I would have been happy,” Downer said.

“I wanted to win for my teammates, coaches, parents and everyone who has supported me. It meant a lot to me to have the success that we did.”

Unfortunately, the COVID-19 pandemic claimed the OMHA final before it could get started, leaving the Terriers as co-champions with the Elmira Sugar Kings.

However, Downer was still recognized for his terrific season as he earned an Ontario Hockey Federation scholarship.

“I was really excited about that; it was a really cool achievement,” Downer said.

Downer was awarded $1,000 towards his academic studies at Queen’s University where he has been accepted for the four-year Commerce program.

When Downer applied for the program last fall, he was tasked with doing a personal statement essay that his hockey career assisted with.

“I was able to include that I have developed different leadership skills and teamwork skills and how those skills are going to be beneficial for me while in the program and in my future career,” Downer said.

As for his hockey career, Downer believes he has come to a crossroads where he can hang up the skates and transition into helping local youth develop their skills.

“I’m going to steer away now from being a player. I’ve played since I was four and I’ve done my best to soak out everything I could from it,” Downer explained.

“I kind of want to volunteer back with Orillia to help give kids the same experiences that I’ve had and help kids fall in love with the game like I did.”

“Let’s just say he was the major spark plug of our team. Any time we needed a big goal, he scored it. He was an offensive threat every time he was on the ice, he was as fast as lighting,” Borrelli said.

Borrelli said that it was a no-brainer to name Downer as an assistant captain for last year’s team, as Downer not only led his teammates on the ice, but also in the locker room and in the community.

“He got the rest of the players motivated. His presence in the dressing room, you cannot replace. His leadership is unmatched and his peers truly look up to him,” Borrelli said.

Borrelli said it came as no surprise to him or the other coaches when they heard Downer was offered a scholarship.

“He is a very book-smart kind of guy, very good in school. He is dedicated, knowledgeable and he’s one of the best kids I have ever coached,” Borrelli said.

Ice Dogs overcome COVID challenges, sizzle on ice (6 photos)
Oct 17, 2020 6:00 PM
Comments
We welcome your feedback and encourage you to share your thoughts. We ask that you be respectful of others and their points of view, refrain from personal attacks and stay on topic. To learn about our commenting policies and how we moderate, please read our Community Guidelines.