With Wayne Middaugh filling in at skip, Team Howard picked up a victory on Saturday in Calgary
Mar 6, 2021 5:29 PM By: Brad Coccimiglio 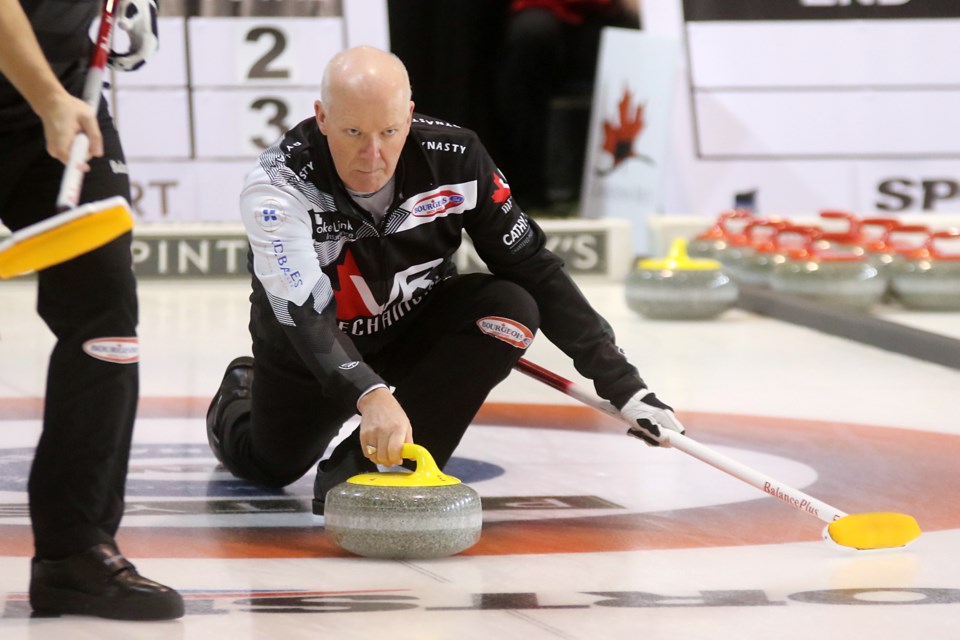 Team Howard is off to a good start at the 2021 Tim Hortons Brier in Calgary.

The Penetanguishene-based rink, skipped by Glenn Howard and in the tournament as one of three Wild Card teams, opened action at the annual event with a 9-5 win over Team Northwest Territories, skipped by Gregory Skauge.

With Howard nursing an injury suffered prior to the tournament, Team Howard alternate Wayne Middaugh stepped in and skipped the team in Saturday’s victory.

Getting an opportunity to be back at the Brier is an exciting one for Middaugh.

“It’s unbelievable,” Middaugh said in media availability provided by Curling Canada. “You play your whole life as a kid to get to play in the Brier.”

Howard called it “cool” to have Middaugh at the tournament with him and being able to play.

Middaugh suffered a broken leg in 2016 that shortened his career.

“He threw a hell of a game today and I’m really happy for him to be out here playing,” Howard said.

Middaugh’s return to action was a welcomed one by other teams.

“It’s great to see him out there,” Team Northern Ontario skip Brad Jacobs said in his media availability following the draw. “The guy is a legend. We all grew up watching him and idolizing him. I love how he approached the game. I always loved the emotion that Wayne brought to the game.”

“He’s just an absolute legend,” Team Northern Ontario third Marc Kennedy added. “You look at him out there and it puts a smile on your face to know that he’s back playing the game he loves.”

Against Skauge, the Howard rink, which also includes third Scott Howard, second David Mathers, and lead Tim March, jumped out to a lead early, scoring three with the hammer in the second end.

After Skauge got on the board with a pair in the third, Team Howard added two more in the fourth end.

Leading 6-5, the Howard rink sealed the win with three more in the ninth end en route to the win.

Team Howard returns to action on Sunday afternoon at 3:30 p.m. against Dustin Mikkelson and Team Yukon.

-With files from the Canadian Press

About the Author: Brad Coccimiglio

A graduate of Loyalist College’s Sports Journalism program, Brad Coccimiglio’s work has appeared in The Hockey News as well as online at FoxSports.com in addition to regular freelance work with SooToday before joining the team full time.
Read more