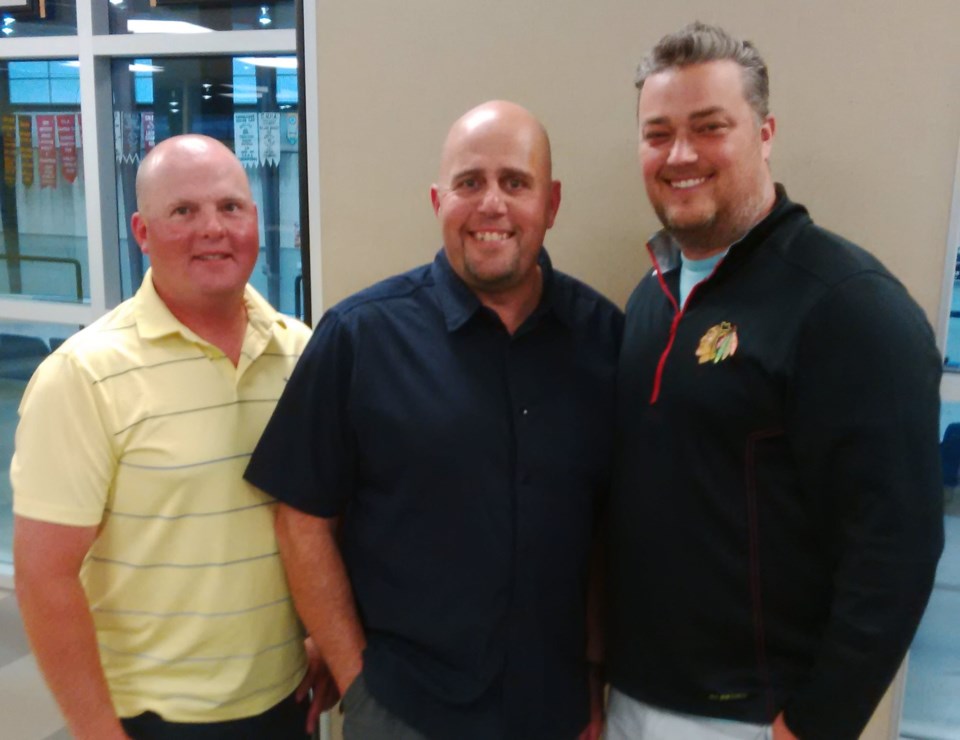 Head coach Nick Ricca, middle, and assistant coaches Dallyn Telford, left, and Jason Hooper are hoping to turn the fortunes of the Orillia Junior C Terriers around in 2017-18. Contributed photo

To say the off-ice team behind the Orillia Terriers junior hockey team is looking for better results in the upcoming 2018-19 season would be an understatement.

The Georgian Mid-Ontario Junior C Hockey League club finished as the doormats of the eight-team loop last season with just four wins in 42 regular-season starts followed by a four-game sweep in the playoffs.

Coaching and management changes along with a rotating roster and a number of games in which there weren’t enough bodies to ice a full lineup resulted in a disappointing season for both the team and its fan base.

President Jamie Clarke and his management team have spent a lot of time this off-season to make sure that kind of year is a thing of the past.

Clarke solidified the coaching staff early in 2018 by naming Nick Ricca as his bench boss. Ricca will be joined by assistant coaches Dallyn Telford and Jason Hooper.

Hooper is the lone returning coach from last season and will also act as the team's vice-president.

The Terriers have also announced the signing of its first nine players for 2018-19.

Heading that list is defenceman Ayden Dooley who was drafted in the 10th round (183rd overall) by the Oshawa Generals in the 2018 OHL Priority Draft after starring for the minor midget Preds last season.

Dooley will be the club's 16-year-old signing (each club is allowed just one). He attended the Gens’ spring camp in April and was told by that organization that he figures in their long-range plans and his development in the junior level at home would be beneficial.

"He'll get a chance to play in all situations with us and playing against bigger, stronger and older kids will help him in the long run," said Ricca. "As a 16-year-old, he needs the opportunity to play and he'll get it with us."

The Terriers also announced the signing of four key returnees including Jake Beard who re-joined the Terriers last season after a stint with the Cambridge Winter Hawks. He had seven goals and an assist in just 12 regular season games in 2017-18 and added four goals and two helpers in just four post-season contests.

The other veterans include the top two team scorers from a season ago, Gravenhurst native Corey Miller, who led the club in points with 31 (10g, 21a) in just 35 games, and runner up Luke Charlebois, who had 28 points (12g,16a) in 41 games along with Ben Schryer.

The other first-year juniors signed include the Dewey brothers, Jacob and Jared, Colton Macdonald and Josh Brown from the minor hockey ranks.