'The phone has been ringing off the hook. We will have a pretty much full tee sheet over the next three days,' says local golf club official
May 21, 2021 7:00 PM By: Tyler Evans 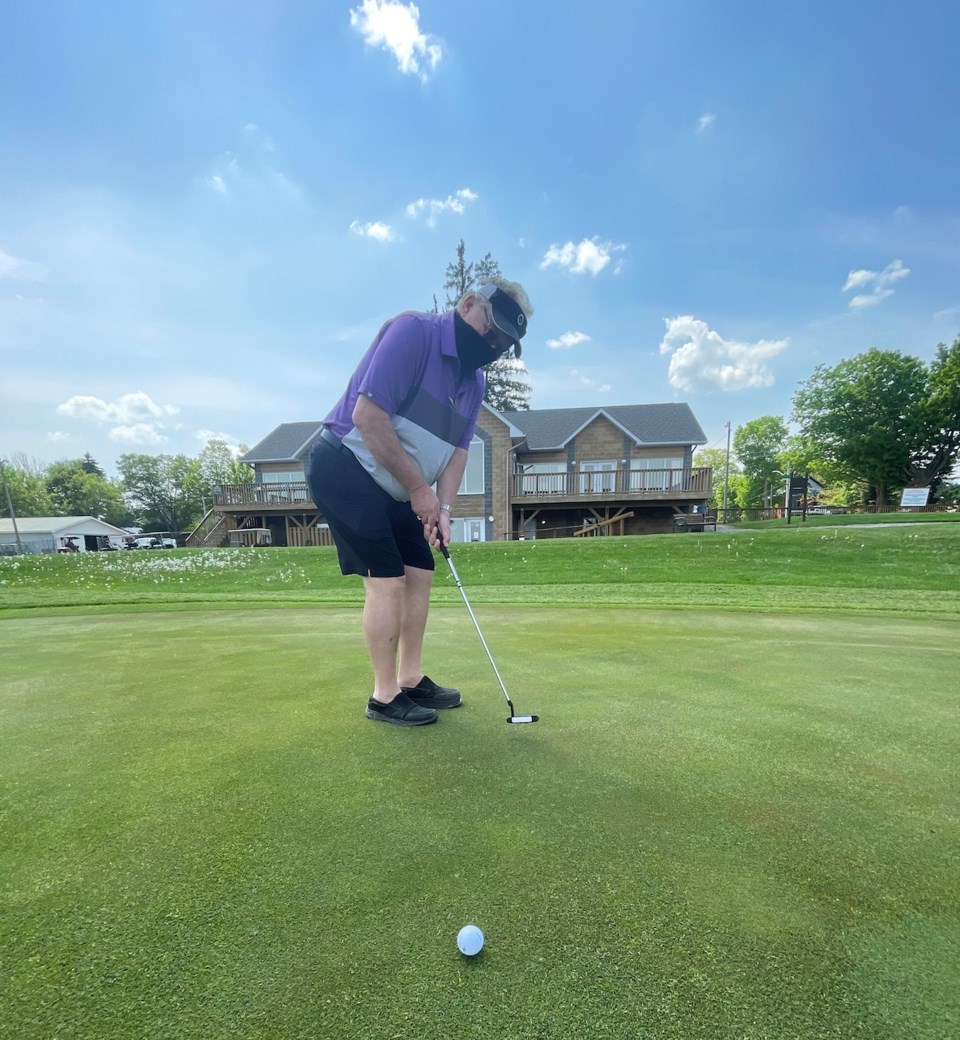 Edward Novosky, the president of Couchiching Golf & Country Club, is looking forward to welcoming golfers back to the course this weekend after a more than a month-long hiatus. Tyler Evans/OrilliaMatters

Just in time for the kickoff to the nicest weather portion of the golf season, Premier Doug Ford announced Thursday that golf courses can open their gates for the Victoria Day long weekend.

“I was a little surprised, I really didn’t think they would open us until after the long weekend,” Novosky said.

Since Ford’s announcement, the Peter Street North club has been receiving phone calls non-stop from golfers looking to book a tee time.

“The phone has been ringing off the hook since three o’clock yesterday afternoon. We will have a pretty much full tee sheet over the next three days,” Novosky said.

“There are still a few times available for each day, but the choice times are taken.”

Luckily for Couchiching Golf & Country Club, the course needed very little maintenance prior to opening for the weekend.

“We are pretty well good to go, my staff has been available lately, so we’ve been able to prepare and fine-tune things while we were stuck waiting,” Novosky said.

“We were ready to open the day Ford closed us down; most things were in place in terms of restrictions and protocols as they are pretty well the same as last year.”

“We had pretty good weather and there wasn’t much for people to do, so we don’t want to put a number on it, but we think the revenue we lost was significant,” he said.

While golfers are excited to return to the course this weekend, so are employees who were left out of work for more than a month.

“They are glad to be back ... and we were hoping patios could be open so we could bring our restaurant staff back as well. Unfortunately, they will be waiting a couple more weeks,” Novosky said

Trehaven Golf & Country Club is operating this summer under new ownership. Manager Cai Liu is surprised courses will be opening this weekend, and she is excited to meet her loyal customer base from the previous ownership.

“We were a little bit surprised for sure, but luckily we already had everything prepared to open. We are excited to see everyone this weekend,” Liu said.

Most of the maintenance work that needed to be done on Friday to get the course open on Saturday was COVID-19 protocol-related, she noted.

“Most of the things we had to do was for safety. We had to add dividers to the power carts to prove extra protection for customers, we had to put up signs to encourage people to keep their two-metre distance, we put out hand sanitizer, we also have more staff working to keep things organized,” Liu explained.

While Liu expects a high volume of golfers this weekend, she says the Hawkestone course will remain clear of crowds.

“I think we will be very busy, but we are only taking groups of four people and they can only show up 15 minutes before their tee time, so it should be good and safe,” she said.

Trehaven still has tee times available for Sunday afternoon when kids can play for free and on Holiday Monday.

Liu estimates the course lost at least $50,000 in revenue due to the month-long closure.

Lake St. George Golf Club general manager Dustin Louth says he heard rumours courses would soon be opening but admits he was shocked when he heard the Ford's announcement.

“We were set up and ready, so we didn’t have to make a big last-minute push, thankfully. We are excited to get going,” Louth said.

Louth expects this weekend to be the busiest of the golf season, noting the Washago course's online tee-sheet crashed yesterday because of the demand of people trying to access the site.

“It’s been insane, the phone has not stopped ringing. We have a little bit of room on our 9-hole course, but other than that the entire weekend is pretty much booked,” Louth said.

“We are expecting it to be very busy, it’s going to be good to see all the regular faces.”

Louth estimates that while stuck being closed, his family-operated course easily lost over $100,000.

“We’ve still had to maintain the golf course while we were closed, greens, tees, around the rough. It’s a big piece of property that we have to look after, and to not have any money coming in is not really viable for business for very long,” Louth said.

Louth’s employees were also left without their regular source of revenue during the stay-at-home order restrictions.

“This is their summer job. We employ high school and college students, and this is what carries them through the winter with the pursuit of their education,” he said.

Hawk Ridge Golf & Country Club will not be opening this weekend according to managing director David White, who said the course is targeting the middle of next week for its opening day.