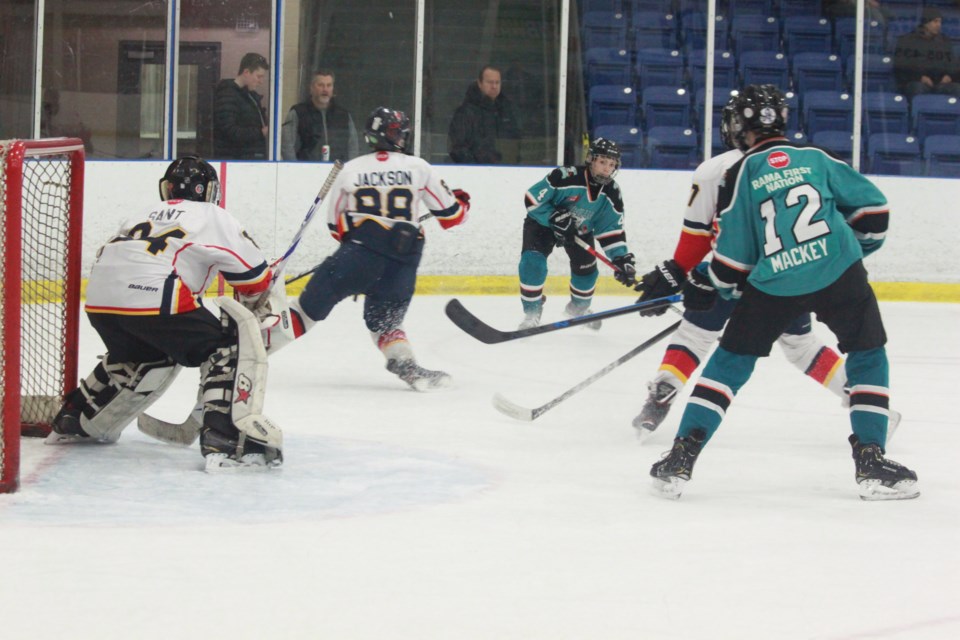 The Rama First Nation Minor Bantams tackled TNT in the second round of the Ontario Minor Hockey Association (OMHA) playdowns.

In game one, the TNT Tornados scored two goals in the opening 18 seconds of the game on a sleepy Terrier team. Trying to dig themselves out of a hole, Orillia started to pick up some momentum by the end of the first period.

Early in the second period, Cameron Weishar scored on the Terriers' first powerplay in the period to cut the lead by one. Connor Varley tied the game up shortly after.

With a few minutes left in the game, the Terriers got goals from Cameron Dooley and Marcus Petroff to pull the Terriers ahead and seal the win 4-2.  Connor Sampson made some key saves in the middle frame to keep the TNT players off the scoreboard further. Assists in the contest went to Dooley, Varley, Bennett Mackey and Cohen Robitaille.

In game 2, TNT again opened the scoring in the second period, but found themselves in penalty trouble. Orillia took advantage of the powerplays when Hunter McLaughlin scored two powerplay goals to take the lead 2-1. Assists on the goals went to Caden Banville and Jordan Blunt.

Orillia’s Dooley scored an early third-period powerplay goal on assists from Varley and Weishar to put the local squad up 3-1. Nathan Fogarty scored to seal the deal with his first of the series on an assist from Robitaille. Ryker Jacobs registered the 4-1 victory in net.

Orillia hosted the Tornados for game three. TNT put the first goal on the board, but Weishar quickly tied the game 1-1 at the end of the first period on the powerplay.

TNT controlled most of the second period, scoring two goals to give them a 3-1 lead chasing Sampson from the Orillia net.

Orillia started to build momentum but were running short on time. With under six minutes left, Varley scored to cut the lead to 3-2. Petroff scored with less than a minute left on a power play to tie the game at 3.

With under two minutes left in the game, Dooley potted the go-ahead and game-winning goal. Assists in the contest went to McLaughlin (3), Petroff, Eric Taher, Weishar, Banville and Mackey.

The Terriers take on their nemesis, the Georgina Blaze, in the OMHA quarter finals. Game one is Friday, Feb. 14 7:30 p.m. at Rotary Place.