Battered and bruised, Orillia came up just short in title game; 'I hope the memory of what they accomplished together this season will last with them forever,' coach says
0
Sep 9, 2019 10:15 AM By: OrilliaMatters Staff 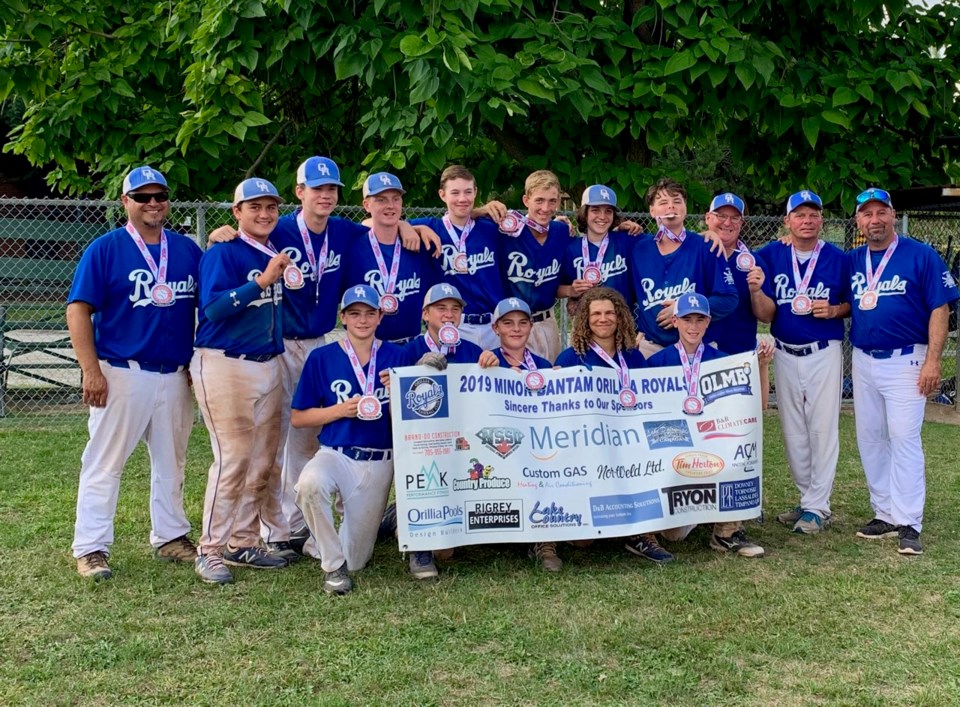 The Meridian Credit Union 14U (Minor Bantam) Orillia Royals finished off an incredible season by placing second at the provincial championships over Labour Day weekend in LaSalle, Ontario.

The Royals had to overcome some nerves in their opening game against the Welland Mustangs, but settled in nicely by the third inning and cruised to an easy 12-2 victory.

The pitching duo of Reece Boyle and Bodhi Taylor were practically untouchable, allowing only three hits. A three-run triple by Kris Inglis highlighted the Royals’ offence, and Tyler Nichol added two RBI of his own going 3-for-3.

Orillia’s defence and running game ultimately made the difference, throwing out numerous Welland runners on the base paths and stealing a total of 13 bases of their own. Boyle and Nichol led the way with four stolen bases each, and Will Timpano had two timely stolen bases of his own early in the game when the Royals needed it most. James Pritchard made two exceptional plays in the bottom of the final inning to stifle any chance of a Welland comeback.

Game 2 was all about pitching and defence, as the Royals managed to squeak past the LaSalle Titans 2-1 in a 9-inning walk-off win. Matthew Klingspohn allowed only two hits over four and two-thirds innings, striking out nine, and then Nichol closed things out for Orillia, allowing only three hits and no runs over four and one-third innings in relief.

The Titans held a 1-0 lead until the bottom of the sixth, when Boyle laid down a perfect bunt to score Timpano and tie the game. Both teams played exceptional defence to keep the game tied until the bottom of the ninth inning, when Boyle took advantage of a lead-off walk to steal second base and advance to third on a wild pitch. With one out and five Titans players crashing home plate to prevent the suicide squeeze, Klingspohn still got the bunt down to score Boyle for the heart-stopping winning run.

In Game 3 on Saturday night, the Royals faced the Ottawa Whiskey Jacks in another nerve-wracking contest. The Royals’ aggressive run game spotted them a two-run lead in the first inning, when Boyle and Nathan Molloy crossed the plate on Ottawa walks and defensive miscues. Orillia took a 5-0 lead in the third, thanks in part to a timely double by Molloy and single by Klingspohn.

Dylan Rankin kept the Jacks’ bats in check for three scoreless innings, allowing only two hits. Emitt McDonald came on in relief and shut down an Ottawa rally, leaving the bases loaded. Ottawa scratched out two more runs in the fifth, making it a one-run game, but Kyle Heckendorn, fighting through injury, made some key plays in the Orillia outfield to keep Orillia in front. With almost no daylight left to finish the game, Inglis took the mound in the seventh inning and got the job done for Orillia, striking out the final Ottawa batter with the bases loaded.

Orillia received a rude wake-up call on Sunday morning, when the Sault Ste. Marie Black Sox took control of the game early, jumping out to a 4-0 lead through the first two innings. Orillia chipped away at the Sox lead, scoring three runs in the fourth, and another in the fifth. Bodhi Taylor was excellent in relief on the mound for Orillia, allowing only one more Sox run through his four and two-thirds innings, and the Royals found themselves down by one heading into the seventh.

Klingspohn led off the seventh with a much-needed single, and Matthew Bush moved him to third base with a perfectly executed sacrifice. Molloy tied the game for Orillia with a great squeeze bunt to score Klingspohn, and set the stage for the Royals to take the lead by beating out the throw at first base. Molloy made his way to third by stealing second and advancing to third on a wild pitch, when Taylor scored him with another perfectly executed squeeze bunt and also reaching base. McDonald added an insurance run for Orillia by knocking in Taylor, and then Taylor shut down the Soo offence in the bottom of the seventh to preserve the incredible come-from-behind win for Orillia.

Entering Sunday night as the only remaining undefeated team, Orillia squared off against the London West Tincaps. Unfortunately, the magic in Orillia’s white shirts finally ran out, and they couldn’t keep pace with London’s high-powered offence, resulting in the Royals’ first loss of the double-knockout tourney. Boyle, Klingspohn, Bush, Rankin, Timpano, Nichol and Taylor all had hits for Orillia in the loss.

Monday morning started with a feisty rematch between Orillia and LaSalle, with London on the sidelines awaiting the winner. The two closely-matched teams went toe-to-toe in a battle that lasted 11 innings before the Royals finally found a way to earn the 9-5 win and send the home-town crowd away disappointed.

Both teams made some excellent defensive plays in extra innings to keep the game tied, but the heroics for Orillia came in the bottom of the eighth inning. After LaSalle led off the inning with a deep double, Inglis made a highlight-reel catch in right field and threw out the runner tagging up at second base for a much-needed double play. LaSalle still managed to get the winning run to third base before the inning was over, but Bush came up huge with a diving, game-saving catch in centre field for Orillia to end the inning.

The Royals finally managed to take the lead for good in the 11th, when Timpano squeezed in Boyle, and Rankin singled in two insurance runs with two outs. Taylor, Boyle and Nichol each had two hits and one RBI for Orillia. Klingspohn, Nichol, Boyle and Rankin were all excellent on the mound for Orillia.

Unfortunately for Orillia, the 11-inning, 4.5 hour semi-final game vs. LaSalle left them with little gas in the tank for the championship game only 30 minutes later against the rested London Tincaps.

Battered and bruised, Orillia played with all the heart and courage they could muster, but the toil of the seven-game weekend finally caught up to them, losing 10-5 in the championship final. Klingspohn went 2-for-3 with two doubles, Boyle went 2-for-2, and Nichol knocked in three RBI at the plate for the Royals. The Royals were excellent defensively once again, with key contributions by Heckendorn, Inglis, Pritchard and Molloy.

It was a season to remember for the Royals, compiling an overall record of 38 wins, only five losses, and four ties, with three of those losses coming at the hands of the provincial champion London West Tincaps.

“I know we all wanted very badly to win a provincial championship, but finishing second is something the boys should be very proud of,” said Head Coach, Tim Timpano.

“More important than the medal, they played with the heart of a champion, they had each other’s backs and they left everything they had on the field," said Timpaon. "These boys will surely go on to bigger and better things, but I hope the memory of what they accomplished together this season will last with them forever.”

Hockey, fun, food and fundraising are goals of tournament (5 photos)
Jan 18, 2020 6:00 PM
Comments
We welcome your feedback and encourage you to share your thoughts on this story. We ask that you be respectful of others and their points of view, refrain from personal attacks and stay on topic. To learn about our commenting policies and how we moderate, please read our Community Guidelines.