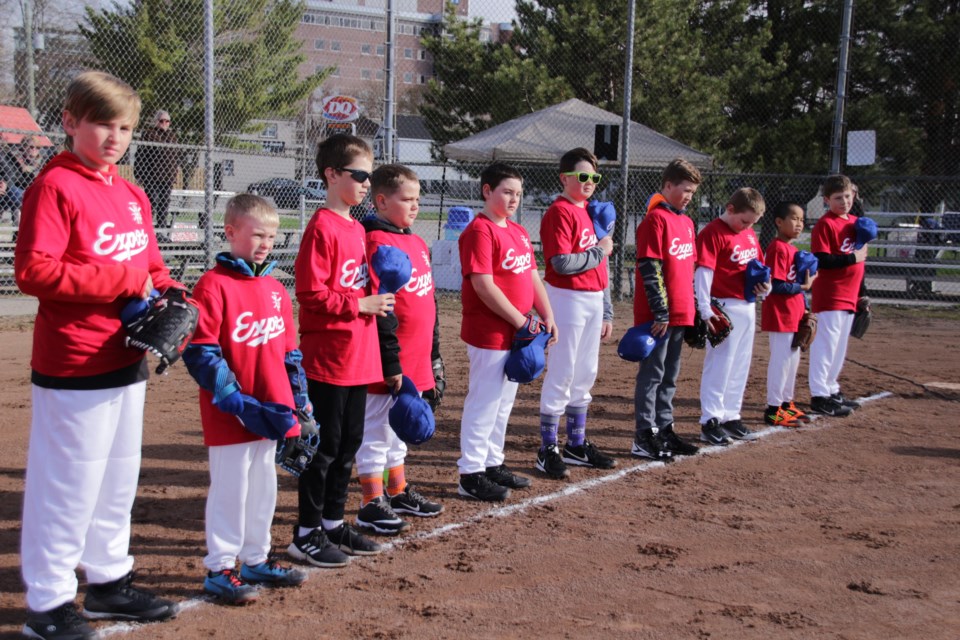 Players from the Domino’s Pizza Expos and Mr. Appliance Marlins stood respectfully for O'Canada prior to the kick-off of the 2019 Orillia Legion Minor Baseball season. Mehreen Shahid/OrilliaMatters

The Ontario government's three-stage roadmap to re-opening the province will keep local athletes off outdoor baseball diamonds and soccer pitches for training purposes until at least Stage 1 which is slated to begin on June 14.

But organized games and competition will not be permitted to start until the province reaches Stage 3, which is projected to begin on July 26.

Orillia Legion Minor Baseball (OLMB) president Wes Winkel is concerned that by the time players are finally allowed to compete, the majority of the baseball season will have been lost.

“We can’t have a whole year of baseball with just training; these kids have been training and practising since last year. It’s hard to keep kids engaged without getting them into games,” Winkel explained.

“The end of July is in the latter part of our season. For minor baseball, it would be very hard to operate once we get past Labour Day because kids who temporarily live here for the summer at a cottage go back home, a lot of kids go off to school and other minor sports like hockey start up.”

When sports leagues were handcuffed from playing games last summer until the end of July, the City of Orillia decided not to issue any permits to local sporting organizations for field rentals. Winkel says a repeat could potentially destroy the foundation of OLMB.

“If we do that again this year, then we may not see a return from many kids involved," warned Winkel. "The kids need a return to normalcy through sports for mental and physical health, the social aspect, and, most importantly, for the long-term survival of the game itself.”

City of Orillia director of business development and communications, Jennifer Ruff, says the city has been communicating with various user groups and leagues as they navigate the changing legislative framework.

“Once we have more clarity on when leagues can operate, staff will work with the Emergency Management Committee on a safe return to team sports,” Ruff said in an emailed statement to OrilliaMatters.

Winkel says Orillia Minor Baseball has teamed with Baseball Ontario to lobby the provincial government to make changes to the restrictions on organized sports.

“It seems that our concerns and efforts to get the government to make changes have fallen on death ears,” Winkel said.

“However, I am confident that change is coming. There is enough noise in the system that I don’t think they will be able to stick to it. The time is now, not July 26.”

OLMB executives will meet this week to make decisions on how to make a season work immediately, whether the provincial government makes changes or not.

“There has been discussion among the different baseball organization presidents in the province to find ways to play the game with only 10 people,” Winkel explained.

“As a baseball fan, I am not a big fan of altering the game that drastically but going another season without baseball is not an option.”

Orillia & District Soccer Club (ODSC) board member John Copp says the organization's executives are also looking for ways to get their players back on the field as soon as possible.

“It’s not going to be easy for us, but as an executive, we will figure it out,” Copp said.

Copp says the ODSC is excited to at least get players back to training during the province's Stage 1 of re-opening in the coming weeks.

“There is a benefit to having people out training, so we are ready to have our players return for that on June 14, and we are hopeful that we can move forward with that,” he said.

While getting back on the pitch in any capacity is a plus after almost two years without outdoor sports, Copp says some players are getting fatigued with the repetitiveness of training without any game action.

“We are going to try to express to them that if they start training in June there is real potential that there will be scrimmages and games one month later, I think that will make them very hopeful,” he said.

Copp is also optimistic there could be some changes to the provincial government’s re-opening plan which would allow for organized games before July 26.

“We’ve seen that things can change very quickly with regulations and vaccinations. The dates are such a moving target, so we are hopeful that we can finish off the last couple weeks of the season with some games, which would make it worthwhile,” Copp said.

“I know that our provincial body is doing absolutely everything that they can to open things up faster, but all we can do right now is be hopeful and remain ready to offer the best basic program that we can when we are given the nod to go.”

While Copp says it will take extra efforts to get players engaged and interested in soccer again once the sporting landscape returns to normal, he believes the game of soccer will be able to offer something unique from the various hobbies that youth have picked up during the pandemic.

“I think each sport offers different things to people: golf, tennis, rock climbing and things like that are all individual sports, and nothing can replace a team sport,” Copp said.

“I encourage our players to get off the couch, get moving, and get active because you are going to have to be ready to get out onto the green grass and go as soon as the province says it’s time.”

Orillia Slo-Pitch League (OSPL) president Mike Borrelli is cautiously optimistic that his players won’t have to wait until July 26 for in-game action. He is hopeful for a July 1. start.

“We are preparing for a July 1. starting date. Slo-Pitch National is telling us that they believe something is going to be announced very soon,” Borrelli said.

“With vaccines going at a rapid pace now, we might be able to play sooner rather than later."

Borrelli says he hasn’t even considered what it would mean for the OSPL if games can’t resume before July 26.

“To tell you the truth I haven’t even thought about it yet, but if we can’t start until then we would still want to run a league,” he said.

Borrelli says the demand for slo-pitch is still high and he isn’t worried about there being a potential lack of interest from players returning later this summer.

“We aren’t worried about that; we think people will want to play as soon as the province gives us the green light,” he said.

“We are getting lots of emails and lots of phone calls. People are watching baseball on TV and they want to get out and play the game,”

"I am hopeful that at the rate vaccines are being administered that we will see more activities open with the ability to operate safely and we will continuously monitor key public health and health care indicators including these vaccination rates, case rates, hospitalizations and ICU occupancy, and the risks of new COVID-19 variants," Dunlop said.

"Step Two will permit the further expansion of outdoor activities and resumption of limited indoor services with small numbers of people where face coverings are worn and with other restrictions in place. This would include outdoor gatherings of up to 25 people for outdoor sports and leagues.

"More information for each step of the Roadmap is being developed as the environment continues to change and will be shared in the coming days and weeks," said the local MPP.

"I continue to have discussions with sport and recreation stakeholders to understand their unique needs and to find a path forward. I recognize that return to play is not only important for the mental and physical health of all of our athletes, but it is also key to rebuilding the province’s social and economic wellbeing."