'This is something I’ve really been working for, this is a really exciting time, and I can’t wait to get started with my new team,' says local power forward
Jun 4, 2021 8:37 PM By: Tyler Evans 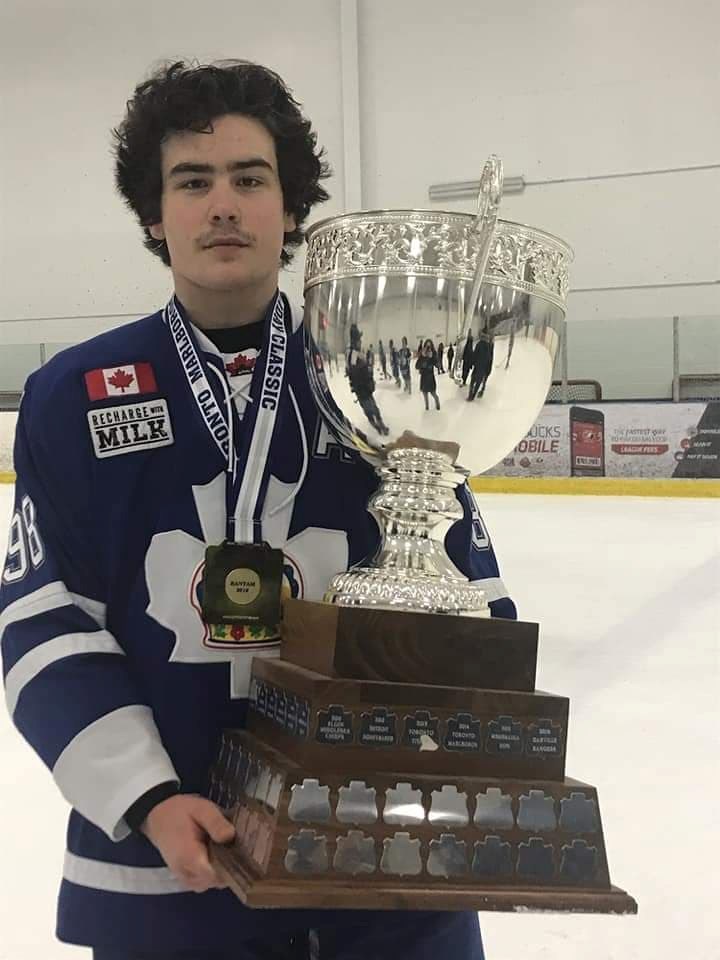 Orillia's Colby Barlow played three seasons with the AAA Toronto Marlboros and is shown with the spoils of victory following the 2018-2019 season.Supplied Photo

"The Attack have such a great organization and an absolutely amazing team. It’s an honour to be drafted to Owen Sound,” Barlow told OrilliaMatters just moments after talking with Attack general manager Dale Degray.

"This is something I’ve really been working for, this is a really exciting time, and I can’t wait to get started with my new team.”

The 16-year-old right-winger came up through the region's 'AAA' program, the North Central Predators, headquartered at the Rama MASK. Last season he played with the Toronto Marlboros AAA organization.

Surrounded by his parents, brothers, sisters, grandparents, aunts, and uncles, Barlow anxiously awaited as the first round played out on YouTube on Friday night.

This year’s OHL draft was loaded with high-end talent, and many hockey analysts had projected Colby to be selected within the top five picks. Despite being drafted eighth, Barlow says he enjoyed the process and wasn’t too worried about his position.

“You aren’t guaranteed anything. You hear all these different rumours from different people, but it ended up the way it did, and I’m really happy with the result,” he said.

While Barlow wasn’t worried about draft position, waiting nearly half an hour to hear his name called did bring him some anxious moments.

“I’ve been anxious for the last few weeks, especially tonight,” he said.

“It’s just awesome to finally see where I’m going with my next chapter.”

Now that Barlow knows where he will be playing, his focus has immediately shifted toward becoming an impact player for his new squad.

“I know I’m going to be putting in a lot of work in over the summer, and I will be showing up to camp the best player that I can be,” he said.

“I’m excited for the opportunity to make the team. I’m for sure ready to put the work in and earn it. It’s something I’m going to work really hard for.”

For the talented teen's dad, Dean, and the rest of the Barlow family, it was a proud moment when OHL commissioner David Branch called Colby’s name.

“We put a ton of work and sacrifice into the process, and it really took a village,” Dean Barlow said.

“It took a lot of people, a lot of support, sponsors, family and friends to get Colby to where he is, and obviously, Colby did his job.”

The Barlow family is excited to be able to continue following the forward's hockey career just two hours away from home.

“Owen Sound is a great place. Dale Degray does an amazing job as a GM, and we can’t wait to get to the next step.”

Dean Barlow reminded his son that now that he’s made it this far, not to take the opportunity for granted.

"This is Colby's opportunity to show everybody that he's meant to be there while helping Owen Sound win games.”