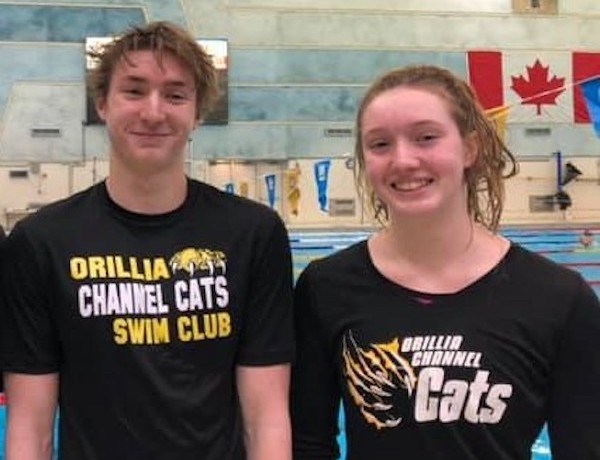 Caleb Near and Blythe Wieclawek, shown after shining at a recent competition, have qualified to represent Orillia and the Channel Cats at the upcoming Canadian Junior Championship. Submitted photo

To end her meet, she raced in 200 metre backstroke and dropped five seconds from her best time and broke the club record in that event as well (2:30.57).

Caleb Near competed in 50 freestyle (11th) 200 metre freestyle (17th) and set a new club record  (2:03.40). Also, in the 100 metre freestyle, Near qualified for a spot in finals as well as making the Canadian Junior Championship standard in that event (54.79) placing 6th overall.

Near wrapped up his meet with the 200 backstroke, placing 4th overall just missing his personal best time.

Near and Wieclawek are preparing for the upcoming Canadian Junior Championships in Calgary later this month and will be competing against the fastest age group swimmers in the country.