Perfect Lakers use OT to roar past Thunder for gold medal 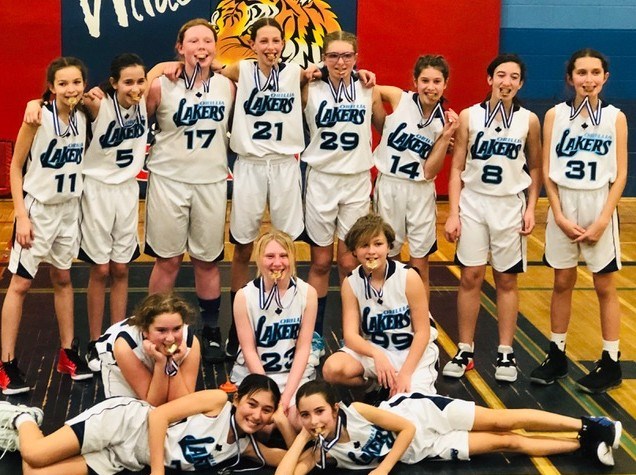 The Northern Slimery U12 Orillia Lakers struck gold at the Barrie Royals Winter Classic. Back row, from left: Ellaina Murdoch, Hilary Carr, Ali Roston, Emma Dongelmans, Emma Pilger, Anna Meeder, Molly Macmillan and Lily Balaisis. Middle row: Ashlyn Kiley, Jordana Graves and Ryan Lazier. Front row: Sienna McParland and Isabella DiSabatino. Contributed photo
NEWS RELEASE
ORILLIA LAKERS
********************
The Northern Slimery U12 Orillia Lakers competed in the Barrie Royals Winter Classic this past weekend and went a perfect 4-0, earning the gold medal.
The Lakers played the York North Avengers in the first game of pool play, and although York was able to keep the score close in the first half, the Lakers pulled ahead in the second half, winning 45-26.
The Lakers' second game put them up against the host Barrie Royals. The Lakers were able hold a lead the entire game, winning 33-14.
The Lakers' last game in pool play was against the Huntsville Hurricanes. The Lakers defeated Huntsville 56-9 earning a spot in the gold medal final against a tough Etobicoke Thunder squad. The Thunder led the first three quarters, but the Lakers were able to come back in the fourth quarter to tie the Thunder 28-28, forcing overtime.
In a tense overtime battle, the Lakers were able to prevent the Thunder from scoring to win 32-28! The coaches are very proud of the girls and how they were able to compete with composure and play hard the entire weekend representing Orillia with pride.
Congratulations Lakers!
********************

Wintry weather puts Terriers' playoff game on ice
Feb 27, 2020 5:54 PM
Comments
We welcome your feedback and encourage you to share your thoughts on this story. We ask that you be respectful of others and their points of view, refrain from personal attacks and stay on topic. To learn about our commenting policies and how we moderate, please read our Community Guidelines.