Teams return to Orillia Saturday night; 'Let's show the hockey world we are a city of champions and support our team,' says GM
0
Feb 6, 2019 5:30 PM By: Dave Dawson 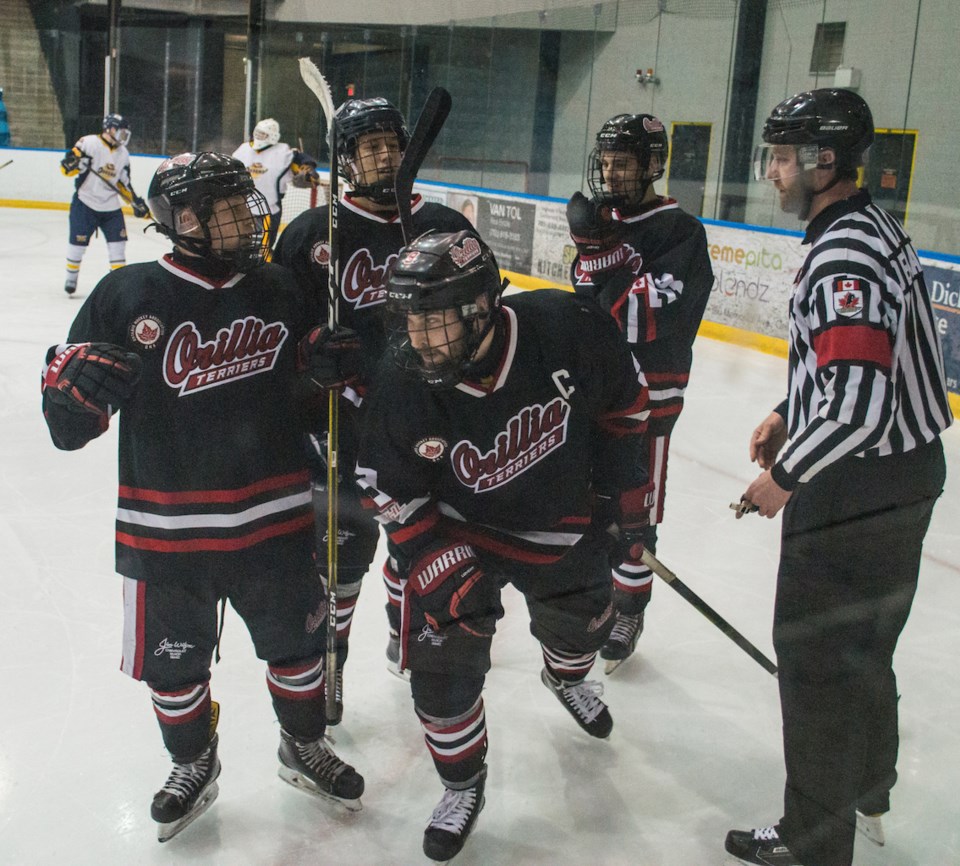 Terriers captain Jake Beard hopes to close out his junior hockey career with a Schmaltz Cup. The Terriers begin their quest tonight in Penetang. Tyler Evans/OrilliaMatters

The Orillia Terriers will kick off what they hope is a lengthy playoff run tonight, when they travel to Penetang to take on the Kings in the opening game of the best-of-seven playoff series with their long-time rivals.

While the Kings earned home-ice advantage by virtue of their slightly better regular-season record, the Terriers enter the series with confidence, says the team’s general manager, Andrew McDonald.

“I have high expectations for this group,” said McDonald. “We have beaten every team in our loop and I feel we can compete and even beat anyone in the playoffs.”

The GM said the team rebounded well from last year’s disastrous campaign in which they managed just four victories.

This year, the Terriers skated to a 19-19-1-3 record and finished fifth in the eight-team Carruthers Division of the Provincial Junior Hockey League, just a single point behind Penetang.

But it wasn’t all smooth sailing. After jumping out to a surprising 11-5 record, rookie head coach Nick Ricca resigned his post over a disagreement with management.

Assistant coach Dallyn Telford took the reins and the team began to struggle. But even when they lost, they were competitive and had a chance to win almost every game.

The Terriers and Kings played each other six times during the regular season; Orillia outscored the Kings 29-27 and earned three wins, lost twice in regulation and, in their most recent game, dropped a 5-4 overtime decision.

“We did get four past him in a losing effort,” said McDonald. “This tells me he is beatable.”

The Terriers will have their own former OHL player back in the lineup for their playoff run.

Orillia native Kyle Heitzner, who turned his back on his OHL dream to come home and chase a title with the Terriers, has only played a handful of games due to injuries and two suspensions.

“His leg is healed and his suspension is served and he’s chomping at the bit to get back into action,” says McDonald.

The opening two games of the series go tonight and Friday night in Penetang.

McDonald said having the stands packed with raucous fans can be a momentum-changer in the playoffs.

“Community and fan support is crucial,” said the GM. “ We need our barn packed and rocking so they know whose rink they’re in.”

Tickets are $5 for students and seniors and $10 for adults.

There is also a Booster Club that will be serving cold beer and 50/50 tickets will be sold to aid the local Legion.

“Let’s show the hockey world we are a city of hockey champions and support our team,” said McDonald.

He said the team will be measured by its success in the post-season.

“As a GM, it’s a bit of a funny place to be because, even after a great regular season if we don’t get past the first round of the playoffs we are exactly where we were last year,” said McDonald.

If a decisive seventh game is required, it would be played Feb. 17 in Penetang.

Fierce Potatoes burn Flames in championship thriller
Jan 26, 2020 6:30 PM
Comments
We welcome your feedback and encourage you to share your thoughts on this story. We ask that you be respectful of others and their points of view, refrain from personal attacks and stay on topic. To learn about our commenting policies and how we moderate, please read our Community Guidelines.