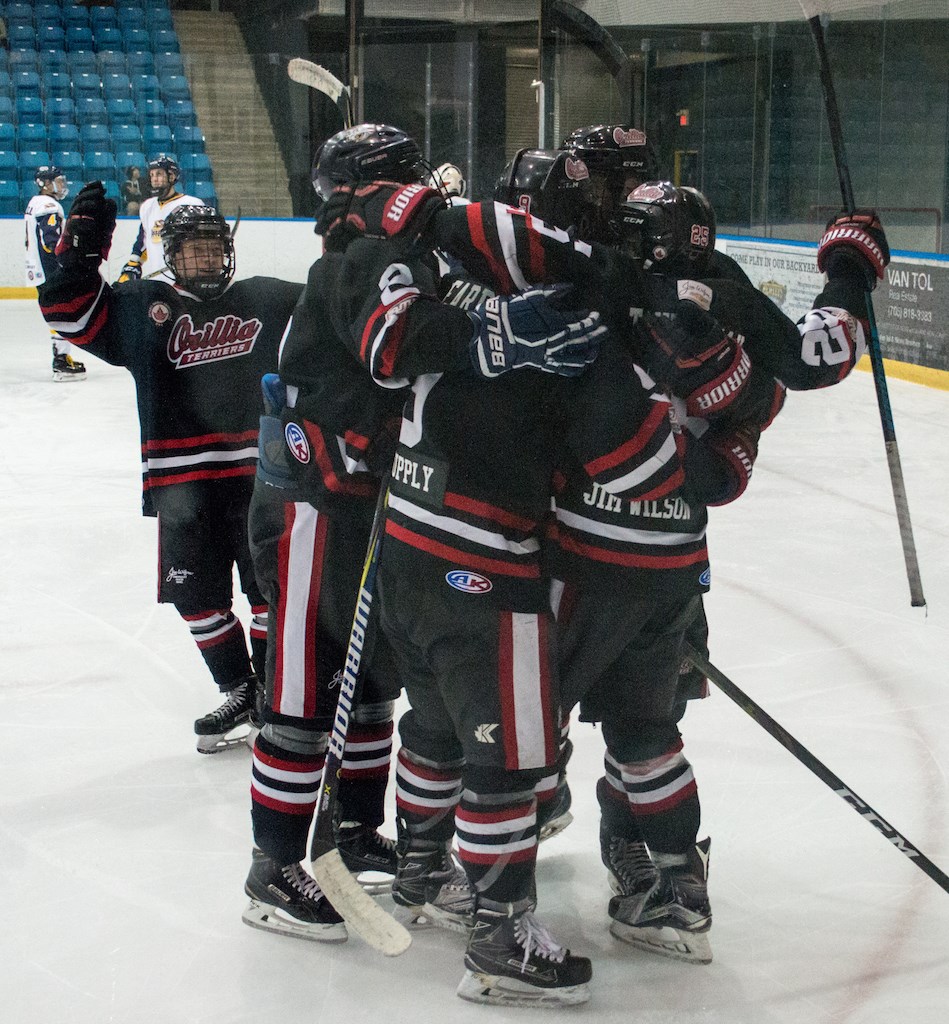 The Orillia Terriers had lots to celebrate in Penetang last night, as they eked out a 5-4 overtime win. Tyler Evans/OrilliaMatters

In a roller-coaster game that had more ups and downs than our recent topsy-turvy weather, the Orillia Terriers steered their way to an impressive playoff victory Wednesday night.

With less than five minutes remaining in the first overtime period, defenceman Matt Priest's shot from the point found its way into the net to give the visiting Terriers an improbable 5-4 victory over the host Penetang Kings.

Things could not have started much worse for the Terriers. The Kings scored on their first shift of the game, when Andrew Snowden beat Orillia netminder Jason Cumbo just 39 seconds into the contest.

But the Terriers stuck to their game plan, endured the early push and then made their own push.

Nevin King, an Elmvale native, tied the contest, before Kyle Heitzner tallied a late goal to gave his squad a 2-1 lead after 20 minutes.

Heitzner and Will Prentice scored second-period goals to help the visitors build what looked to be a safe 4-1 lead.

However, former Terrier Trenton Micks scored with just 18 seconds left in the middle stanza to give his team some life heading into the final frame.

In the third, the Kings surged and got to within one when Micks scored on the power play early in the period.

Then, with the goalie pulled in favour of an extra attacker, Braedon Dorion scored a last-minute goal to knot the contest and send it to overtime.

Penetang had lots of chances to win the contest, but Cumbo stood tall.

And then the Terriers did what Penetang could not: They took advantage of the power play. Priest's game-winner came just nine seconds after a Penetang player was sent to the penalty box.

The win gives the Terriers a 1-0 lead in the best-of-seven Provincial Junior Hockey League quarter-final series. Game 2 will be played Friday night in Penetang.

The Terriers are hoping to have lots of fan support when they host their rivals Saturday night in Game 3 of the series, at Rotary Place. Game time is 7:30 p.m.

TERRIER TALES: It was an impressive return to the lineup for Heitzner. In his first game after suffering a broken ankle and serving a 10-game suspension, the former Barrie Colt forward had three points. The Kings outshot Orillia 56-45 in the back-and-forth contest in Penetang. Due to a rash of injuries, including to captain Jake Beard, the Terriers used a pair of local major midget players: Will Prentice and Ben Hofstetter. Both played well in the nail-biting win.

Fierce Potatoes burn Flames in championship thriller
Jan 26, 2020 6:30 PM
Comments
We welcome your feedback and encourage you to share your thoughts on this story. We ask that you be respectful of others and their points of view, refrain from personal attacks and stay on topic. To learn about our commenting policies and how we moderate, please read our Community Guidelines.