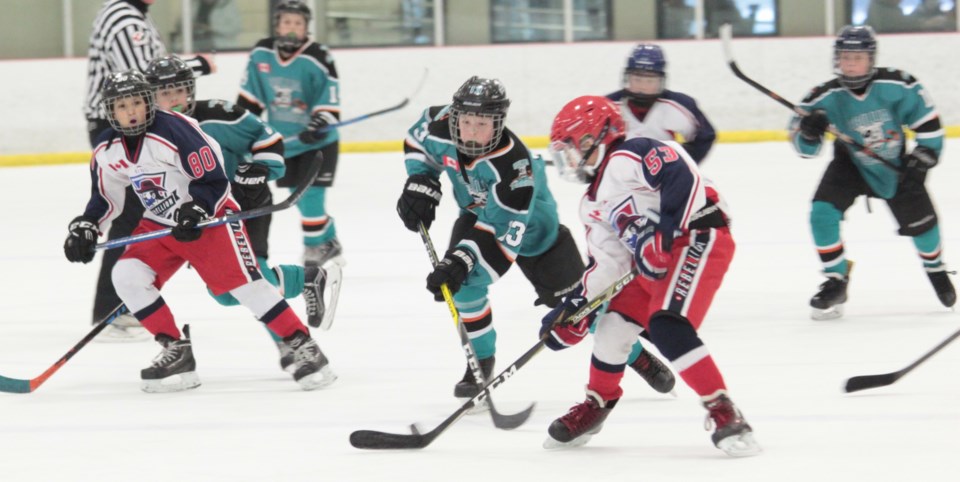 The Jim Wilson minor peewee Orillia Terriers swept aside the King Rebellion in the first round of the Ontario Minor Hockey Association (OMHA) playoffs.

In Game 1, Orillia went down a goal early when the Rebellion capitalized on a rebound in front of netminder Ryker Jacobs. Orillia’s Marcus Petroff potted the equalizer in the second period as he slid the puck under the Rebellion goalie. Petroff again found the net in the third period to give the Terriers their first lead of the game, which was also the game winner. Orillia’s defence and strong goaltending from Jacobs shut the door and secured the 2-1 win for the Terriers. Assists in the contest went to Tommy Goard (2a) and Hunter McLaughin (2a).

Orillia traveled to Schomberg for Game 2 of the series. The game was scoreless until the third period, where Goard roared in off the faceoff and hammered the puck past the King goalie. The score remained 1-0 until the middle of the second period, when a King forward found the back of the net past Connor Sampson to tie it at one. King applied tons of pressure down the stretch but Sampson and the Terriers were able to hold on and push the game to overtime. In overtime, King found themselves in penalty trouble to start the period. Just after the expiry of a 5 on 3 advantage, Orillia’s Devin Fisher put away his own rebound to earn the victory for the Terriers, 2-1.

Orillia hosted King in Game 3, hoping to close out the series. Orillia’s Cohen Robitaille started the scoring mid-way through the first period on a shot over the glove of the King goalie. Goard and Fisher both registered assists on the goal. This sparked Orillia, as the next shift Bennett Mackey fired one past the screened King goalie to give the Terriers a two-goal lead. Cameron Weishar registered the assist on Mackey’s goal. After no scoring by either team in the second period, King responded in the third as they tucked a goal past Sampson to cut the lead to one. King again ran into penalty trouble late in the period, and Nathan Healy made them pay as he tipped a Weishar point shot past the King goalie to restore Orillia’s two-goal lead. Lukas Hagman got the other assist on the game-winning goal. King was able to get one back late in the game, but Orillia won the game 3-2.

Orillia will take on their arch rivals, the Barrie Colts, in the next round of the OMHA playdowns.