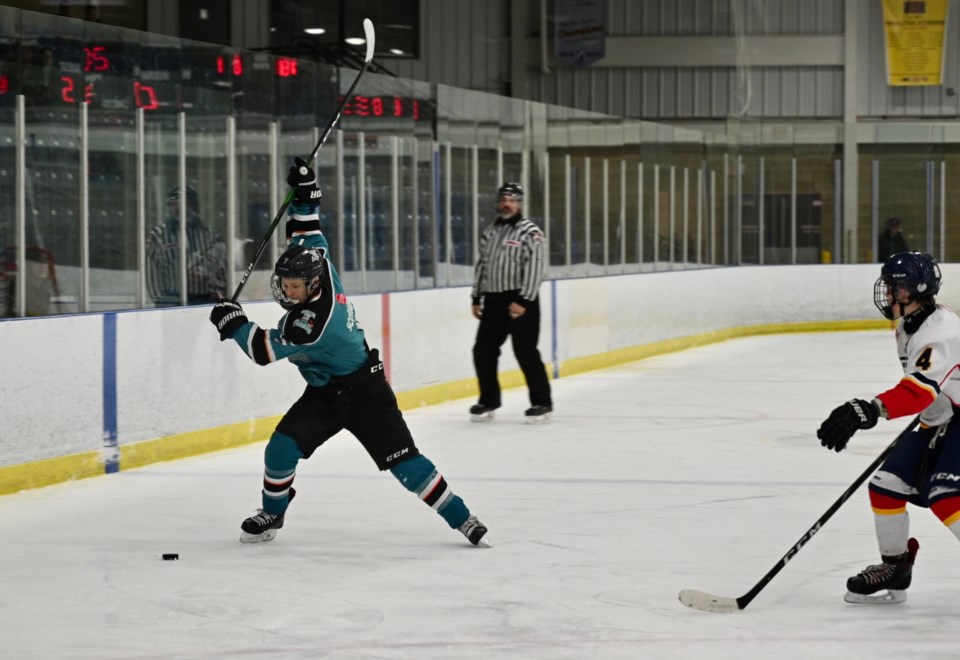 Orillia's Ty Snelleman winds up for a point shot. Snelleman and the Scotiabank minor midget Terriers swept Barrie in the second round of the OMHA playoffs.

In Game 1, Orillia went down 1-0 in the first period only to get a goal back at the end of the period from Brock Jeffels. In the second period, Jhett Winkel skated from the draw all the way through the Barrie defence to score and put the local squad up 2-1.

Sam Trumble added a short handed goal a few minutes later to put the Terriers up 3-1. Orillia found themselves with penalty trouble trying to kill two five-on-three powerplays by the visiting Colts. The Barrie powerplay was too much as they scored a goal late in the powerplay to close the game to within one.

In the third period, J. Winkel scored his second of the game on the powerplay to increase their lead by two. The Colts stormed back with back to back tallies to tie the game at 4-4.

J. Winkel scored again to complete the hat trick with the eventual game-winning goal. Jonah Teahen added his own powerplay marker to seal the victory 6-4. Assists in the game went to Kaiden Robitaille (2), Connor Flannery (2), Trumble (2), Jeffels (2), and Carter Barnard (1). Kamden McIvor was in net for the win.

In Game 2, the Terriers travelled to Barrie. Barrie again capitalized on an early first-period tally, after the puck acted like a pinball, bouncing off of a couple of players before landing over the top of Colby Small and into the net.  A few minutes later J. Winkel took matters in his own hands and scored to tie the game at 1-1.

In the second period, Orillia’s offence was too much as Orillia added goals from Trumble, Ty Snelleman, Barnard and Robitaille.

Trumble added his second of the game in the third to cap off the scoring for the Terriers as Orillia took the game 6-1. Assists in this contest went to Flannery (3), J. Winkel, Jace Gilbert, Robitaille and Teahen.  Colby Small earned the victory in net.

With this series win, the minor midgets advance to the OMHA quarter finals to battle Richmond Hill. Game 1 is Wednesday Feb. 12 at 8:50 p.m. at Rotary Place.