These Lady Kings are provincial champions! 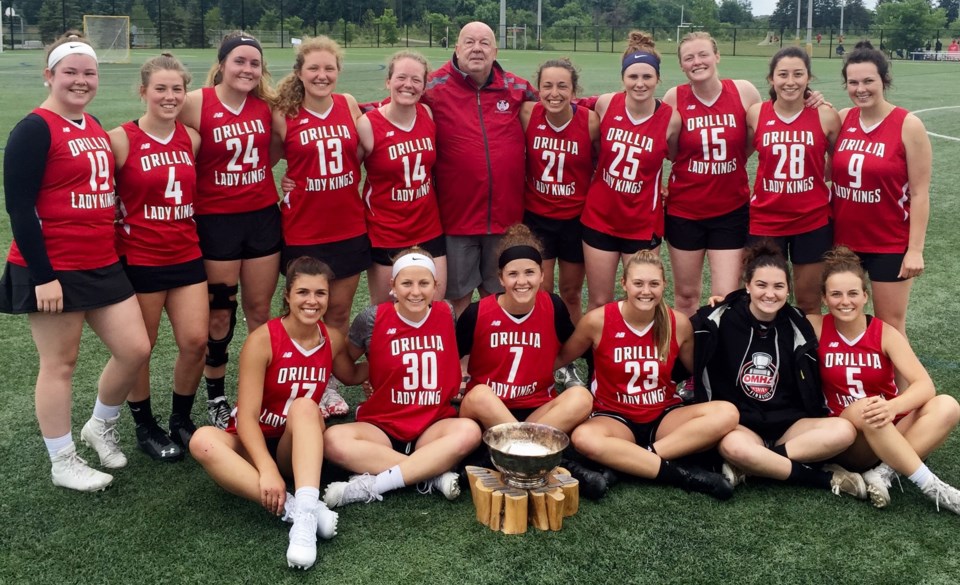 The weather gods may have tried to rain on their parade as the BMO Nesbitt Burns Senior Lacrosse team traveled to Brampton for the weekend to participate in the 2018 Ontario Women’s Field Lacrosse (OWFL) senior championships. The lacrosse gods, however, decided to shine down on the team as the Orillia Lady Kings are now the 2018 Ontario Women’s Field Lacrosse “A” Division gold medal champions.

Despite wet and cooler conditions all weekend, the local team persevered though those conditions and played focused and determined defence and received scoring from throughout the lineup on their championship run. The team made up mostly of players that have made their way through the Orillia Lady Kings organization allowed the players to gel as the season progressed.

Orillia would open the tournament Saturday morning against defending OWFL senior champion and long-time nemesis, Orangeville Northmen, and despite a hard-fought effort fell by a 9-6 margin. Camille Vibert with a pair with singles from Emily Arkell, Kiah Shanks, Abbi England and Huntsville native Kyra Meredith was all the offence Orillia could muster against Olivia Hoffman who shone in net for the Northmen.

Game two would see the Lady Kings get their offence on track as they cruised to a 14-6 win over Toronto Beaches. Annie Lloyd notched a hat trick while adding three assists to pace the team. Vibert also chipped in with a hat trick and added an assist. Bryant University freshman Abbi England scored a pair while Emily Van Kessel, Sarah Utting, Teresa Mayo and Kaitlyn Beech would score to help Mikayla Kinkel earn the much-needed win in net.

Orillia’s third game on the day would see them play the match of the tournament as Six Nations had owned Orillia during the regular season. However, grit, determination and a somewhat controversial goal at the end of regulation would turn that around in an exciting 11-10 victory for Orillia. Peterborough native Emily Arkell scored right at the final buzzer to lead Orillia to the heart-stopping win against Six Nations, who were favoured going into the tournament. The game would be tied at 5-5 after the first half of play and action was back and forth as the Six Nations goaltender was stellar. However, Orillia’s Kiah Shanks scored with one minute left to tie the game at 10-10. Orillia would win the draw from there and with a stoppage of play with three seconds left on the clock and the ball at the far left side of the field, Lloyd would pass across the field to find a wide open Arkell who beat the Six Nations netminder right as the buzzer sounded. Sara Utting with three, Vibert and Lloyd with a pair and singles from Mayo, Arkell, England and Shanks were recorded in the highly competitive match.

Orillia would begin play on Sunday facing Kitchener-Waterloo and would again receive a hat trick effort from Vibert in the 11-6 win, sending them to the championship game. Lloyd and Shanks would also score a pair each with singles from England, Rachel Mochulla and Kyra Meredith. Kunkel earned the win in net for Orillia and shone when tested.

Orillia would face the Orangeville Northmen who along with the Oshawa Lady Blue Knights have shared provincial gold the last 12 years, so Orillia had an uphill battle and psychological battle within themselves. However, stellar goaltending by Canisius College freshman Emily Van Kessel was the tonic to get past that obstacle and lead Orillia to its first provincial gold in senior A division play. The overall team strength and attention to defence first was put to the test as well and led by Shannon O’Connor, Kaitlan Van Kessel, Kennady Blunt and Hayley Rekker the Lady Kings controlled play for the majority and would get out to a 4-1 lead at the half. Shanks with a pair and singles from Mayo and Lloyd helped Orillia gain the confidence they needed as they now knew they could keep up with the Northmen. Kyra Meredith would score a pair in the second half and Lloyd would seal the 7-2 victory scoring in the second half but it was Van Kessel who stole the show, making huge saves during key moments in the contest, earning player-of-the-game honours for the gold-medal champions.

Captains and veterans Teresa Mayo and Kaitlyn Beech accepted the Tewaaraton Cup and celebrated with teammates after earning the victory. The players and parents extend a huge thanks to sponsor and long-time lacrosse supporter John Mayo from BMO Nesbitt Burns for sponsoring the team this year.

Orillia angler reels in big bass at CSFL event on Lake Simcoe
Aug 1, 2020 11:15 AM
Comments
We welcome your feedback and encourage you to share your thoughts. We ask that you be respectful of others and their points of view, refrain from personal attacks and stay on topic. To learn about our commenting policies and how we moderate, please read our Community Guidelines.