From Confederate flags to ATVs, Tiny council gets an earful ahead of Monday meeting 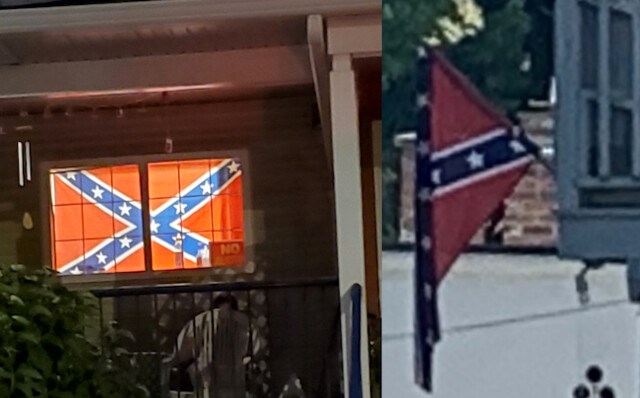 A Tiny Township resident is calling for council to take action and ban the sale and display of the Confederate flag in the township.

Reuben Hunter wrote to council ahead of its Monday morning meeting after coming across a flag that was displayed at a residence on Oliver Drive and Fanella Road, just north of Balm Beach.

"I was so shocked to see a Confederate flag displayed in the front window of a house that I felt the need to stop and take some photos," writes Hunter, whose photos have not been included in the council committee agenda.

"I am disgusted that this symbol of racism, white supremacy and hatred towards minorities is being displayed in the front window for all to see," continues the letter. "It is visual hate speech, and I was extremely offended simply by the sight of it."

Hunter is asking council to ban all sales and displays of the Confederate flag.

Dale Wylie, another Tiny resident, has written in asking council to take immediate action around an increase in ATV and dirt bike traffic at Wolfe Trail.

"On May 23rd, the seasonal occupant at 78 Wolfe Trail drove his dirt bike several times down Wolfe Trail and then up the 15th Sideroad to get to the trail behind my property, and also to access the trail on Lot  21, Concession 15," writes Wylie in his letter, adding that the OPP has attended to the issue, which continued despite their intervention.

He is asking council to look into having the area policed more often to help reduce illegal traffic on the roadways.

In addition, to these issues, council will also be receiving a presentation by another Tiny resident, Tom Mason.

He wants to talk about the concept of dynamic distancing, which means that as the economy reopens, communities must be ready to reimpose physical distancing and socially restrictive measures periodically with surges in disease activity. This is to be done to contain outbreaks and allow economic revitalization to continue.

Mason is asking council to base its decisions on Tiny's unique situation "and become advocates for this area's state of freedom."

Council will also hear from Viasat about a proposed satellite antenna facility at Concession Road 15 East. This facility hopes to provide high-speed internet to customer through Viasat's satellites.

As well, council will look at a staff report on the recovery of all programs and services as the province slowly reopens.

The clerk will seek council support around an Enabling Accessibility Fund application that would give the municipality up to $100,000 for installing touchless sinks and toilets in public washrooms at community centres, public-works complexes and the township office.

The committee of the whole meeting begins at 9 a.m. Monday and will be followed by a regular council meeting the same day. Both meetings can be viewed online via the township's YouTube channel.

COVID-19 surcharge: Necessity or opportunistic?
Aug 1, 2020 4:59 PM
Comments
We welcome your feedback and encourage you to share your thoughts. We ask that you be respectful of others and their points of view, refrain from personal attacks and stay on topic. To learn about our commenting policies and how we moderate, please read our Community Guidelines.