LINX transit coming to some parts of Tay this summer

Route 6 from Orillia to Midland will have two stops in Midland, two stops in Victoria Harbour, one stop each in Waubaushene, Coldwater and Warminster, and two stops in Orillia
Feb 28, 2021 9:54 AM By: Mehreen Shahid 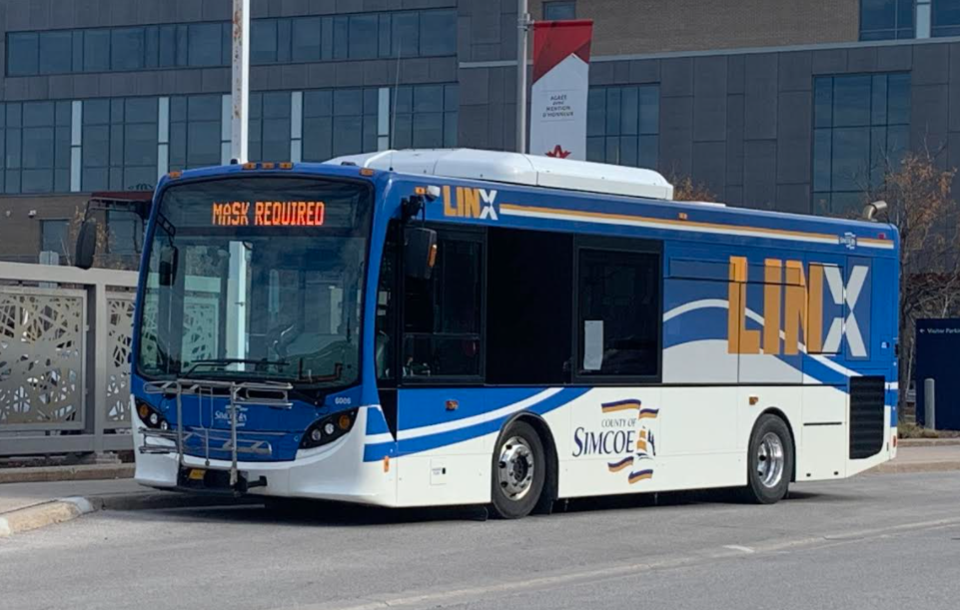 Tay council isn't giving up on its hope for a Port McNicoll transit stop with plans to bring it back to the county during public consultations around its transportation master plan.

That was the conclusion drawn at the end of a recent council session during which county representatives talked about the new LINX Transit route that will be launched in this summer.

The discussion centred around the two stops studied for Port McNicoll.

Dennis Childs, Simcoe County manager of transit, said the Triple Bay Road and Talbot Street stops looked at during the study would add up to 18 minutes to the Midland-Orillia route's run time.

"When we look at the stop into Port McNicoll, the bus is going to go down one area stop and go out the other area," he said, in response to a question by Coun. Paul Raymond. "When you look at all the stops we've put in place, other than the end of the line, there's always one stop on the other side of the road and one on the opposite side. The reason is for efficiencies.

"When you look at Port McNicoll, if we were to go down and put a bus loop, it's not going to save us any amount at all," added Childs. "The reason we had two stops on either side of Port McNicoll is for efficiencies. Anytime you're pulling into a bus loop, you're always going to need to add additional time."

Raymond said, he, and other councillors, want the decision reconsidered.

"I understand being a lower-tier municipality we don’t have a say," he said. "I tried to find out from the studies what the ridership estimates were per hour, per location. I could not find anything through the county’s site. Is that information available for Tay Township?"

David Parks, director planning, development and transit with the County of Simcoe, said he did not have the information on hand but could share it with council later.

Parks said the county looks at establishing a regional system.

"Our study was limited, but our direction was from county council," he said. "That’s why we’re doing the (transportation) master plan to see if there’s more we can do. We didn’t get to that scale because it wasn’t our mandate, but I encourage you to bring that up."

Raymond said he would make it a point to do so because he did not believe the micro-transit options were the answer.

"(Accessibility) requirements prevent micro transit systems," he said. "So short of doing taxis, do you have any suggestion on how we could get around that economically?"

Childs said there has been a huge push over the last few years for on-demand transit.

"That really is the direction rural communities are going to have to go, because the ridership numbers are not high," he said. "It's an easier system to use and the vehicles you can use are smaller vehicles and compliant with current (accessibility) legislation. A lot of these new technologies use apps and make it much more user friendly."

During the presentation, Childs noted that the transit link, known as Route 6, will see a soft launch in this summer with the first month being free. The delay was caused due to bus orders being delayed during the pandemic.

The route has two stops in Midland and Victoria Harbour, one stop each in Waubaushene, Coldwater and Warminster and two stops in Orillia.

The stops in Midland will be at No Frills and Georgian College. In Victoria Harbour, the bus will stop at Richard and Albert Streets and Oakwood Community Centre. On its way through Waubaushene, Route 6 will stop at Sturgeon Bay Road at Pine Street. In Coldwater, passengers can access the service at Coldwater Road and Michael Anne Drive. No specific stop destination was provided for Warminster, however, in Orillia, the bus will stop at Lakehead University and West Ridge Boulevard at Monarch Drive.