It's not about Nimbyism or property values, but rather the environment, Tiffin residents say
Jun 29, 2020 7:56 AM By: Mehreen Shahid 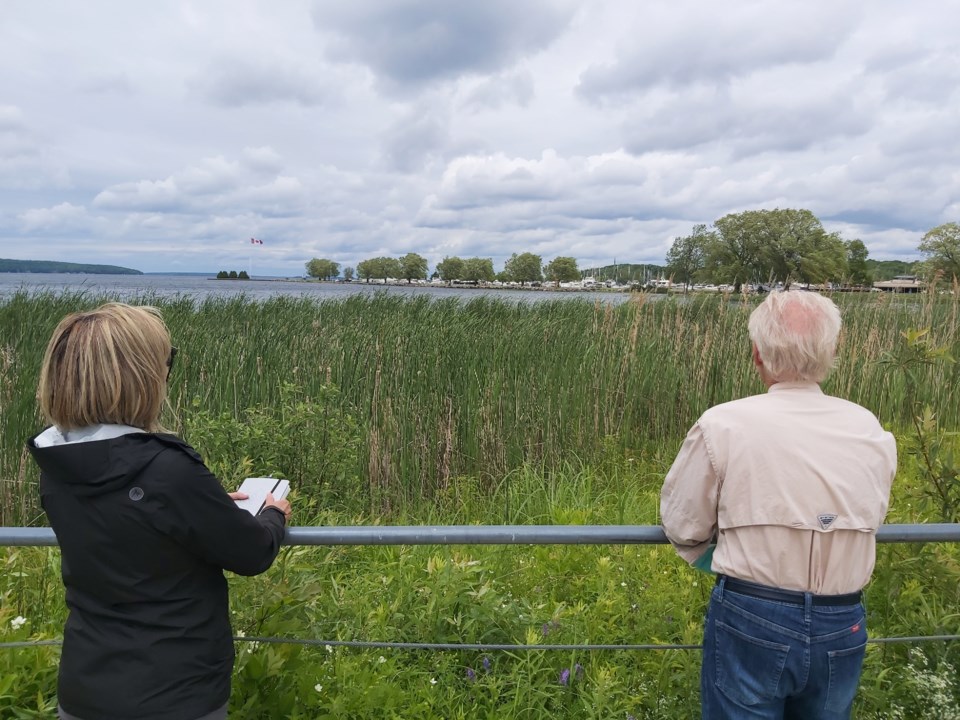 Janice McMurdo and George Dixon, who didn't want their faces shown, look over to Wye Heritage Marina across the water from Midland. Mehreen Shahid/MidlandToday

Janice McMurdo wants to know why.

"Does human development and money making supersede wildlife protection?"she said, talking about the proposed trailer park development at Wye Heritage Marina in Tay Township. "Why so many units? Why on that spit along the Wye River? And why a playground and pool at the mouth of the river?"

The Midland resident, who lives across from the marina in a waterfront development, said she and her friends who use the area for paddle boarding, kayaking, canoeing and boating, formed a committee after finding out about the project.

"It's not about NIMBY," said the retired educator. "It's about the impact that much human development will have on a sacrosanct, quiet, (and) undeveloped area. And the impact it will have not only on the natural beauty but the wildlife, in terms of nesting and spawning in the area."

According to a presentation made to council by the landowner's planner, what's being proposed are cabins and capacity for class-A and class-C motorhomes, which would be parked on the property and owned by boat owners who already use the marina. The pre-fabricated cabins, meanwhile, would be available for boat owners to rent so their friends can visit and stay on the property for the weekend.

"The rationale for the developer said this is driven by a request from boaters wanting additional accommodations for family and friends," said McMurdo. "At the very least, (they're) saying 10% of the boaters are wanting this. Two people on our committee are boaters there and they have not received any notification other than a very poorly placed sign. They have been speaking to many of their colleagues and not one of them has said they're in support of this."

"I asked the manager why the boaters hadn't been made aware of it," she said. "He suggested it isn't really a trailer park.

"The fact remains it's a high-density development," added Ouimet-Schryver. "With two parking spots for each of the 74 units, that's a congested area. People don't drive up to their slips, they park in the lot so it's already a congested area."

As a boater, she said, it seems strange the developer would cite the cabins as friends and family accommodations.

As for the Class-A and Class-C motorhomes, she said, why would the boaters be using those when they have a boat?

In a letter McMurdo has written to the officials in Tay, she writes, "The people of the Tiffin neighbourhoods knew the marina was there and bought into a development in Midland that was zoned for residential use. At the time of purchase, the zoning across the bay did not include residential zoning (Trailer Park), otherwise many of us might have reconsidered our purchase."

Her neighbour and friend George Dixon has written to Midland council expressing the concerns of the committee.

"We have serious concerns about the environmental and ecological impact of this proposed development at the mouth of the Wye River," says the letter. "The Wye River is an established wildlife corridor where trumpeter swans and other waterfowl nest and where turtles, amphibians and various mammals also make their permanent homes."

He adds in the letter that their group called the Tiffin Basin Action Committee wants to meet with Maple Leaf Marinas, owners of the property.

A win-win compromise, said McMurdo, would be moving the proposed development to the back of the marina property and a reduction in the proposed density.

"Fewer units in the back of the property would be a much better scenario," she said. "I would prefer zero impact, but if it's a reduced impact, that, for me, would create somewhat of a win-win."

Dixon, who was a municipal solicitor in the Greater Toronto Area, said if the plans are approved by the township and go ahead, there are appeals processes available to his group.

He added the marina owners could also use the same process to appeal a decision against their proposal.

Across the basin, Tay Township resident Wayne Coombes said by agreeing to live in a municipality, residents agree to follow the Official Plan and Zoning Bylaw rules.

"The rules are intended to be a measurable expression of philosophies we share," he said. "(The rules) exist for reasons, at least, understood at the time they were formulated, and have become the basis for our expectations for living here."

In Coombes' view, the applicant's request to change the rules are essentially a "because I want to" request.

"There is no credible benefit to the municipality or its residents," said the Bayview Avenue resident. "Instead, the application threatens the neighbours of the applicant and the ecologically sensitive environment it occupies and abuts."

Coombes said his disapproval of the project isn't meant to denigrate Tay.

"We support small, local government and we're generally pleased with services here," he said. "However, in our judgment, approval of this application impacts at least Midland and its residents, as well as Tay, and should not be Tay's alone to grant ... only to deny."

Once the information from all the studies has been furnished, staff will prepare a report to bring forward to council at a future meeting.