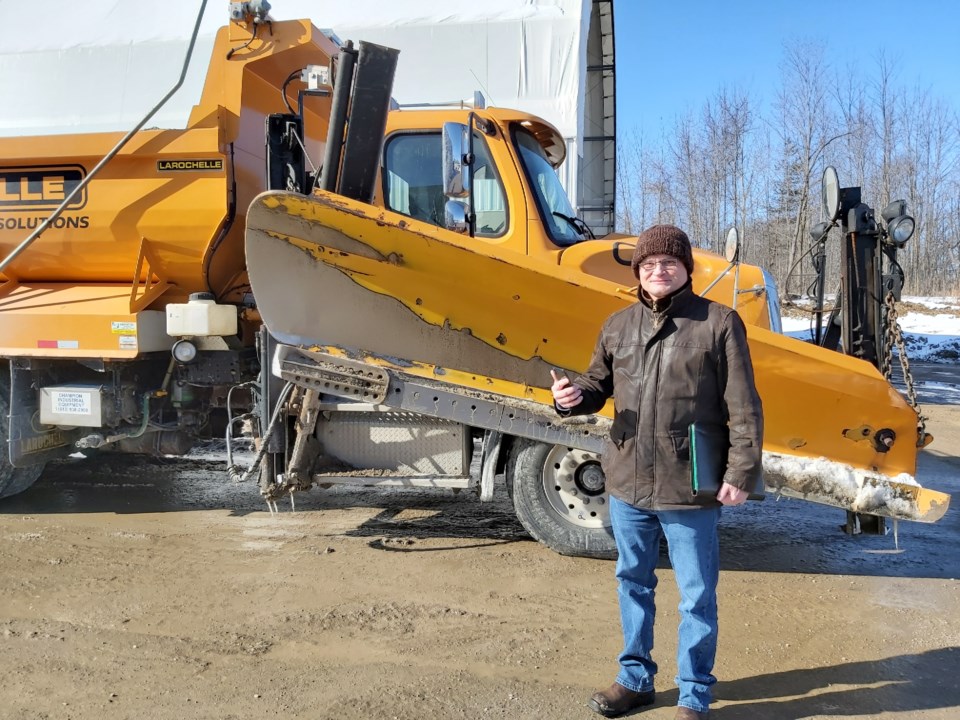 Andy Campbell, director of infrastructure, presented a report on a new cloud-based system that will be installed in the town's snowplows, sidewalk plows, and road inspection trucks. Mehreen Shahid/MidlandToday

Where is the snowplow? Is it coming to my neighbourhood?

If you live in Midland, soon you might know exactly where town snowplows are with the help of new software the town has acquired for its snowplows, sidewalk plows and other operations vehicles.

But that's just one feature the town might use in the new system, said Andy Campbell, director of infrastructure for the Town of Midland, as he responded to concerns from councillors that real-time plow location could lead people to stand in their driveway waiting for it to arrive.

Even if it is made available to the public, he said, answering a question from Coun. Carole McGinn, who said she didn't support making that information available to residents, it would have a bit of a lag to mitigate just that issue.

Campbell emphasized the staff's focus in acquiring this system isn't that particular feature.

"It's a cloud-based software that gives staff more access to check the data using their cell phones," he said, talking about the technology acquired through a new pact with Lynxfield Canada, for a one-time cost of $16,925 and an annual cost of $20,000, up from $8,000. This was all part of a report Campbell presented to council Wednesday evening.

With the old technology, the staff has to save the data after it comes back into the yard, he said.

"It's not real-time," said Campbell. "And you hope the data dump happens when the truck pulls into the yard."

This problem will be mitigated with the new system, which is a cellular-based system that allows data to be saved on to a cloud-based storage system while the vehicles are on the road, he said.

"There's no potential loss of data," said Campbell. "Even if some parts of town may have poor service, the computer on the truck stores it and as soon as it reconnects to the server it uploads the data again. It's a more robust technology than our old system."

The new system will be available on the snowplows, sidewalk plows, inspection trucks, and supervisor vehicles, he said.

"On a snowplow, it will record the location of the truck, the speed of the truck, dashcam information, and the temperature of the road, among other things," Campbell said. "It will also record if the salt or sand is turned on. It records how much we're putting on the road and it records if the blade of the truck is up or down. It'll know all the telemetry on the truck."

These data-recording features will also aid in road inspection, he said. It will take in the weather condition, road and sidewalk conditions, and street light conditions.

"The province is mandating that we have to have inspections every so many hours, every day, all year long - it's called the minimum maintenance standard," he said. "The other part of it is, under law, if we can demonstrate we've maintained the roads properly, it mitigates our liabilities in the event of a car accident."

Campbell said if there is a litigation against the town, it costs taxpayers when they lose the case.

"If we have good documentation and are maintaining our roads right, it saves money for the taxpayers," he said. "That is one advantage to the residents."

The new system, he said, should make road maintenance more timely and efficient.

"Right now, when a defect is seen in the road, we have to create a work order and documentation to send another crew out to fix a pothole or put a new sign up," said Campbell. "We have a paper-based system and guys send email around. It's not always an efficient system. This new software has a built-in work order system. Once it's created, more people will know where to look it up and if one person doesn't see it, someone else will see it."

COVID-19 relief: Province to provide free child care for front-line workers
Mar 27, 2020 2:33 PM
Comments
We welcome your feedback and encourage you to share your thoughts on this story. We ask that you be respectful of others and their points of view, refrain from personal attacks and stay on topic. To learn about our commenting policies and how we moderate, please read our Community Guidelines.