A lengthy discussion led to council asking staff to bring back more recommendations around how to curb burning of materials that emit noxious smoke
Jan 25, 2021 1:44 PM By: Mehreen Shahid 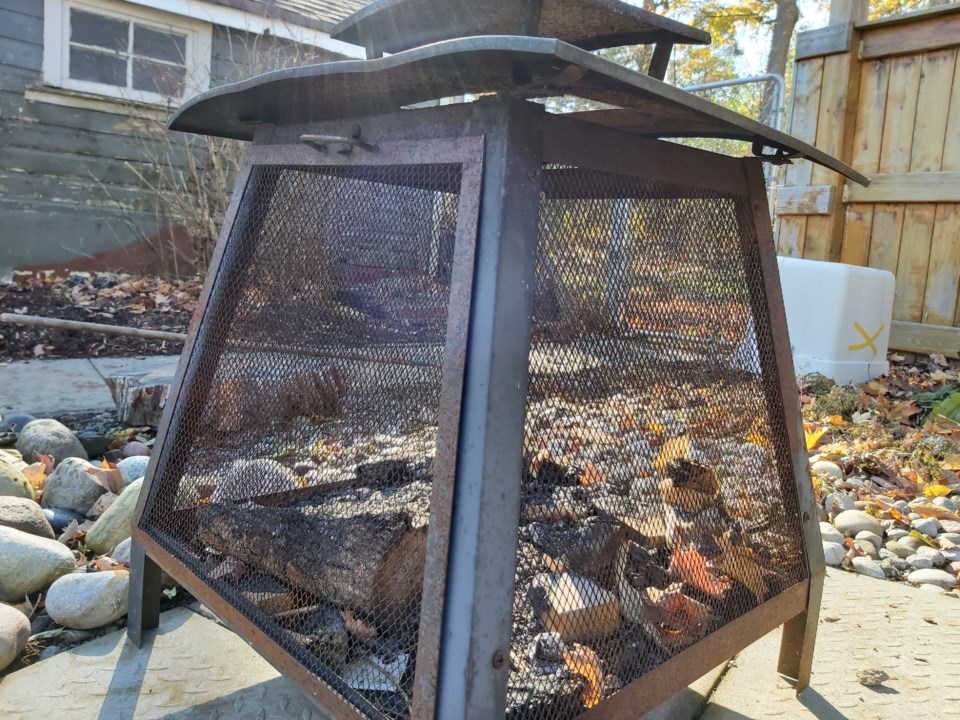 Tay council will bring back burning permit to its next meeting. File photo Mehreen Shahid/MidlandToday

Tay councillors told staff municipal open burning policy needs more than a reduction in fire-pit size to control the smoke complaints that brought the matter to this stage.

At a recent committee meeting, Fire Chief Brian Thomas was asked to take a closer look at how to address the smoke issue using a method other than reduction in fire pit size, which he had pitched in a staff report.

"By making a few minor adjustments, such as the size of a fire-pit (down to 0.6 metres in diameter)," he said to council, "I believe will help make a hotter, cleaner burning fire and less chance of old construction paint being used."

Another recommendation in his report was to ban open-air burning in urban areas between midnight and 5 p.m.

"Hopefully, some of these (recommendations) will address those issues and lessen the complaints," said Thomas. "I know it won't be the end of complaints, but it might keep the majority of our residents from expressing concerns to council."

Deputy Mayor Gerard LaChapelle said even if pit sizes are reduced, residents could simply use a chainsaw or axe to chop down a skid and burn it in a smaller pit.

"It isn't going to restrict me from using building materials," he said. "We all have the means to break the rules, so I believe people will find a way to break these rules, too."

Municipal law enforcement officer Rob Kennedy said fire-pit size is one of the first features a bylaw officer looks at when a property is visited following a complaint.

"That is one of the tools we use for education," he said, adding staff understands some people have their fire pits built into landscaping or their decks, so changing the size would be a hardship. "If we have smaller fire wood, that means smaller pieces of wood, they burn hotter and faster. That does dissipate the whole aspect of the smoke that's realistically the problem that brought this to light."

Coun. Jeff Bumstead said he didn't agree with the reduction in fire-pit size but he did agree with a change in timing.

"If someone is burning a skid that they're not supposed to be burning, they'll find a way to burn it in a smaller pit," he said. "I agree with a change in timing, I don't agree with the 5 p.m. and midnight timing. I think it might be a bit too restrictive. I would suggest from 3 p.m. till one or two in the morning in the urban areas."

His peer, Coun. Mary Warnock, did not see eye to eye with him on the timing issue.

"I'm not in agreement with the hours because a lot of people are having fires after midnight," she said, adding she'd like to see a 5 a.m. to 5 p.m. duration. "In the winter time, nowadays people are burning fires daily and they need to gather outside in the winter time and keep warm."

Bumstead suggested that maybe the reason residents are burning items that produce noxious fumes is because they're not aware of what is allowed in the fire-pit.

"The majority of the problems is the fact that people don't understand what seasoned dry wood is," he said, adding he was in support of an educational approach. "I don't know if putting some pictures right on the permit would be a way to go."

That struck a chord with everyone --- even staff.

"We did step up proactive enforcement and education," said Kennedy, adding that last year bylaw attended 52 open air burning complaints, had 17 inquiries and did 18 routine patrols.

He did not have a breakdown in terms of urban and rural areas.

"It was found that one out of 20 people we stopped were burning correctly. Everybody had at least one thing wrong, whether it be minor or major. There were a few major problems with some people."

LaChapelle said educating is essential but the township must also go a step further and determine when education ends and punishment begins.

When residents receive burn permits, they sign for it, he said, pointing out that's when an education element can come in.

"The second part is when you're identified as an offender after being educated, that's a strike, and the third one is when the fine comes in," he said.

The matter was referred to a next meeting of council for when staff will bring back another report with changes to it.