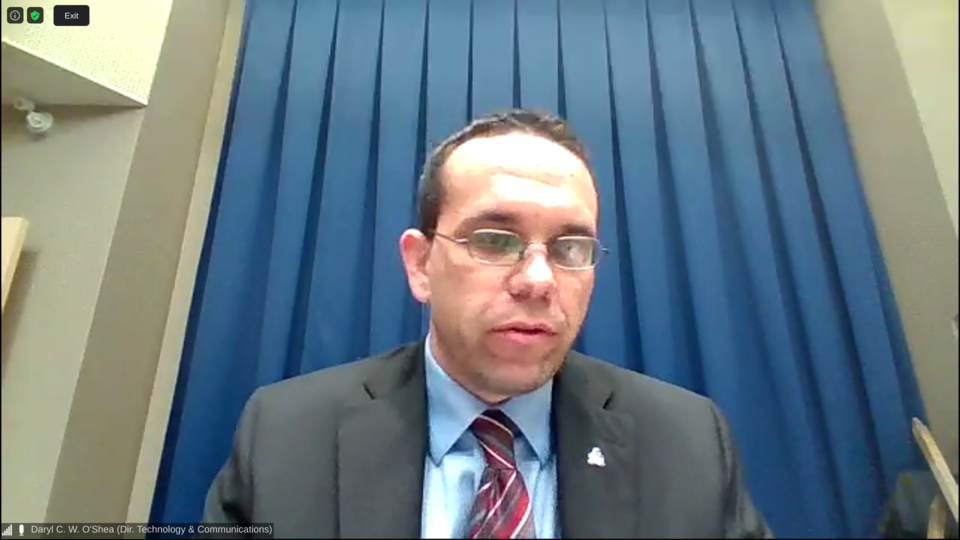 Daryl O'Shea, Tay's director of technology and communications, gave council details about how municipal systems are being moved to online. Mehreen Shahid/MidlandToday

Tay councillors are happy to hear that municipal systems are moving online and asked staff to continue making strides by closely looking at existing software.

But Coun. Mary Warnock asked if staff could still accept bill payments over the phone.

"For someone that can't go online and wants to make a payment for a burning permit or whatever, can they do that over the phone?" she said.

O'Shea said that wasn't a service the municipality offered as the liability for staff taking a credit-card number over the phone is very high.

"We do provide ways for residents to pay for things like fire permits during closure of the office," he added. "We've been offering the option of dropping off a cheque in our dropbox. And we're creating a permit for them and mailing it out to them."

"If there's software out there, why are we taking things and putting our own spin on it?" he asked. "If we tamper with something else, we create aggravation for ourselves."

LaChapelle was referring to software used by the public works department.

"The current software for public works was bought," said O'Shea. "That doesn't always work, but it's the first option we pursue."

Where the first option is to try to buy it off the shelf, he added, it may not always work.

"We're seeing what software neighbouring municipalities are seeing work well and what features in their software packages are working well," O'Shea said. "Then we go out and look at commercial offerings to see if there's a package that offers all those features. At the same time, we don't want to buy software that doesn't talk to other software we have."

Staff is also looking at adding agenda-meeting software so the clerk's department can gain some efficiencies, he said, as well as an HR portal to better manage timesheets, vacation requests, training and licensing records.