Popular lecture series will go ahead using Zoom platform; topic for series starting today is The Power of Music
0
May 20, 2020 3:51 PM By: Nathan Taylor 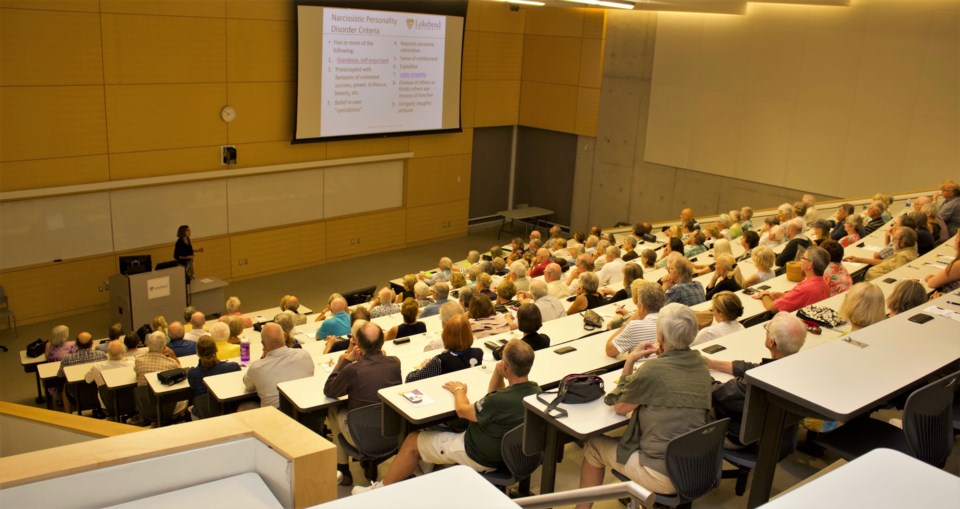 The lecture hall at Lakehead University in Orillia was packed for a Third Age Learning Lakehead presentation in 2018. Jaclyn Bucik/Supplied photo

A lecture series aimed at local seniors is adapting to the current times and taking its talks online.

Now in its second year, Third Age Learning Lakehead (TALL) has arranged a number of series focusing on different topics, with the goal of providing “creative and thought-provoking educational opportunities to adult learners in Orillia and surrounding area.”

Previous series have seen hundreds of people show up to hear experts discuss religion, climate, media and other topics. However, the COVID-19 pandemic has led organizers to do things differently.

The latest series, called The Power of Music, will be presented using the Zoom video conferencing program, starting May 20.

“There are a lot of people who are unfamiliar with the platform, so we have to not only expect that we’ll have some glitches, but also figure out how to overcome those glitches,” said Anne Hilliard, whose idea it was to bring the series to town after seeing similar programs offered elsewhere. “It’s been a learning curve for me, too.”

At a typical TALL lecture, audience members listen to a talk and have a chance to ask the presenter questions at the end. Organizers are trying to make the online version as close as possible to the original.

“It’s one thing to sit and listen and watch. It’s another thing to be interactive on Zoom,” Hilliard said, adding those who have signed up have received a “cheat sheet” to help them get used to the new format.

The virtual lectures do present an opportunity, too.

“We can reach a larger audience further afield,” Hilliard said, noting some people couldn’t make the drive to Orillia to take in a lecture in person.

She said it was important to find a way to continue to offer the series, despite the pandemic.

“So many other things are being postponed or cancelled, so it’s wonderful to have something they had before available on another platform,” she said. “It’s in keeping with our whole mission of lifelong learning.”

This time, they will learn about music, and there’s a diverse lineup of speakers on the list.

On May 20, Ajay Heble, founding director of the International Institute for Critical Studies in Improvisation, and professor of English in the School of English and Theatre Studies at the University of Guelph, will speak on the topic Sounding Truth to Power: Listening to (and Learning from) Music as a Soundtrack for Change.

Next up, on May 27, Rachael Finnerty, a former president of the Music Therapy Association of Ontario, will talk about the importance of music therapy in health care.

On June 3, Lee Willingham, of Wilfrid Laurier University’s Faculty of Music, will speak on the topic Boundary Walking: Exploring Where Music Lives at the Edges.

A Juno- and Polaris Prize-nominated singer/songwriter will be up next on June 10. Danny Michel’s topic will be From the High Arctic to Purgatory Cove: Adventures of a Canadian Musician.

Capping the series on June 17 will be Orillia’s Mike Hill, who will discuss the 60-year history of the Mariposa Folk Festival. Hill is a former president of the festival and has written a book about the popular event.

The cost to take part in the series is $59. More information about the series, including registration details, can be found here or by emailing cell@lakeheadu.ca.

Hilliard thanked Lakehead for assisting with TALL, and she praised the committee, which includes community members who come up with suggestions for topics and speakers.

“We have an amazing committee. It’s the driving force,” she said.

Local communities bracing for impact from high water levels
Jun 2, 2020 7:30 AM
Comments
We welcome your feedback and encourage you to share your thoughts. We ask that you be respectful of others and their points of view, refrain from personal attacks and stay on topic. To learn about our commenting policies and how we moderate, please read our Community Guidelines.