Americans load up on candy, trick or treat - or not

Americans may not know if trick or treating will happen this year because of the pandemic, but they’re buying a lot of Halloween candy while they wait to find out. U.S. sales of Halloween candy were up 13% over last year in the month ending Sept.
Sep 23, 2020 3:21 PM By: Canadian Press 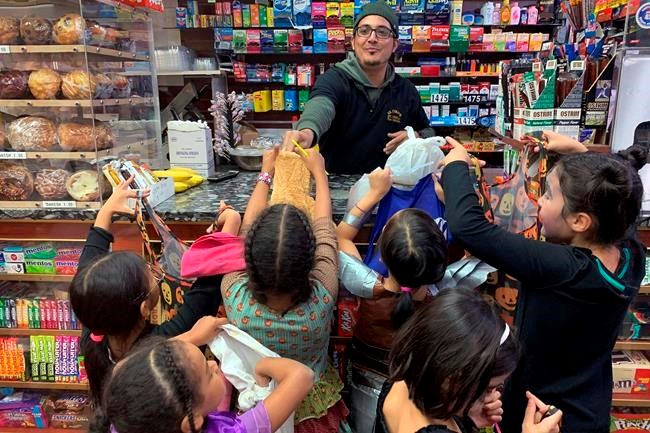 Americans may not know if trick or treating will happen this year because of the pandemic, but they’re buying a lot of Halloween candy while they wait to find out.

U.S. sales of Halloween candy were up 13% over last year in the month ending Sept. 6, according to data from market research firm IRI and the National Confectioners Association. That’s a bigger jump than the usual single-digit increases. Sales of Halloween chocolate alone are up 25%.

Earlier Halloween displays at some chains, like dollar stores, Meijer and ShopRite, likely helped boost sales. But Americans may also be in a mood to celebrate after months of pandemic anxiety.

Cassandra Ambrosius, who lives in central Wisconsin, was surprised to see bags of Halloween candy at the grocery in early September; her husband snapped one up. She expects to buy more bags as Halloween gets closer, because she thinks people in her will figure out how to trick or treat safely.

“I’m sure people are just excited for a little sense of normalcy,” Ambrosius said.

That enthusiasm is good news for candy companies, which rely on the 10-week Halloween period for nearly 14% of their annual $36 billion in U.S. sales. Halloween is the biggest holiday of the year for candy makers, followed closely by Christmas and Easter. Valentine's Day is a distant fourth.

But while early demand are strong, sales in late October could suffer if the coronavirus clamps down on trick or treat. Fifty-five of Mars Wrigley's Halloween candy sales usually happen in the last two weeks of October, says Tim LeBel, the company's chief Halloween officer and head of U.S. sales.

New York’s governor recently announced that he won’t ban trick or treating in the state. But some cities, like Springfield, Massachusetts, and Antigo, Wisconsin, have called it off. Big Halloween events at places like Disney World and Salem, Massachusetts aren’t happening.

Ben Reed, of Arlington, Texas, takes pride in giving out full-size candy bars for Halloween. He usually buys between 160 and 200 candy bars.

“This year I have no idea how many to purchase,” he said. “I do not want to disappoint the kids, but on the other hand, I do not want to be stuck with too many and add more COVID pounds to myself.”

Numerator, a market research firm, surveyed 2,000 consumers in early August and found that 52% planned to buy less candy this year than they usually do. Just 11% planned to buy more.

Candy companies have been making some changes to deal with all the uncertainty around Halloween. Hershey is selling fewer large Halloween-themed bags of candy and shifting more candy to smaller, everyday bags that can still be sold after the holiday, said Phil Stanley, Hershey’s global chief sales officer.

Mars is customizing bag sizes. A place like Los Angeles County, which is discouraging trick or treating, may get smaller bags, for example.

“We’re trying to cover all the bases because each market is going to celebrate a little bit differently,” LeBel said.

CVS Caremark says it’s reduced the number of large and giant bags of candy stores will receive. It’s also expanded its assortment of “instant consumable” sized candy and gum that parents can pick up to treat themselves. Target says it’s cut back its assortment of Halloween candy in anticipation of a reduction of trick or treating this year.

Still, online sales could give candy companies a boost as the pandemic changed shopping habits. Digital sales more than doubled at Easter, LeBel said, and that could happen again at Halloween.

Companies have also shifted their marketing in response to the pandemic. Mars is launching a Treat Town that will let people trick or treat virtually and earn credits toward real candy. Hershey has a map showing COVID risk by county on its .

Miranda Leon of Albany, Georgia, still plans to buy Halloween candy in mid-October and make treat bags for her three kids’ classrooms. There’s no official word on Halloween in her city, but she plans to take her kids trick or treating and hand out candy.

“So much has been taken from our kids this year — classes cut short, sports cancelled, summer camps cancelled,” she said. “I refuse to take away the joy of trick or treating from my kids.”

S&P/TSX composite edges up, U.S. stock markets down in late-morning trading
Oct 19, 2020 10:55 AM
Comments
We welcome your feedback and encourage you to share your thoughts. We ask that you be respectful of others and their points of view, refrain from personal attacks and stay on topic. To learn about our commenting policies and how we moderate, please read our Community Guidelines.